Is there truely such a thing as a negative DC voltage (with reference to earth ground)?

For example a +-5V power supply can easily be created by using two voltages (+10V, +5V) and GND. If you use +5V as ground, it will make +10V the +5 equivalent. GND will become the -5V equivalent. The problem with such a circuit is that ground isn't compatible with earth ground. For example you can't then tie your newly created (+5V offset) ground to earth ground without creating a short circuit.

Voltage may be interpreted as a measure of the potential energy of a theoretical test charge divided by its magnitude (dimensionally, volts are joules per coulomb). As with many potentials in classical physics, this is a relative quantity, meaning that your measurement of a potential is between some two points or states.

Physically, there is nothing incompatible with the idea that the relative potential of some point P is negative when referenced to earth ground, or any other reference for that matter. All it means is that a theoretical positive charge would lose some amount of potential energy when moving from your earth ground or reference to P.

We can easily realize this by demonstration with a number of examples that should prove that there's "truly" such a thing as a negative DC voltage with reference to earth ground: 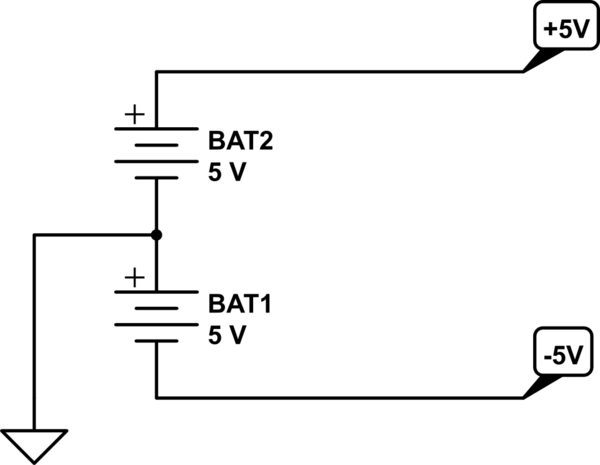 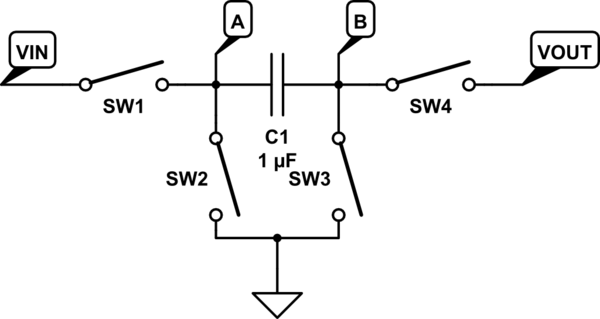 Assume, as before, that the ground symbol may be understood as earthing or the use of any reference convenient to you.

Initially, SW1 and SW3 are closed, causing the potential at A to rise above the potential at B. Then, SW1 and SW3 are opened, and then SW2 and SW4 are closed. Since A is below B, but A is now connected to ground (be it earth ground, your Arduino's GND connection, Mars ground, etc), hence B and VOUT are both below earth ground. With the addition of extra capacitors, and the use of fast semiconductor switches, this is something that is commercially realized as a practical way to produce voltages lower than your lowest supply.

With the appropriate safety precautions and appropriate components and measurement tools, you should be able to verify both of these examples and claims for yourself if you so desire.

Yes, it is. Your problem is that you're confusing the terminal that is called GND with the big ball of dirt that is the Earth. They may or may not be connected.

The fact that it is labelled GND is irrelevant.

But if you connect both GND and the +5V terminal to Earth, then there will be a short circuit.

Each independant power supply provides us a floating output voltage, as it's insulated from the source. Therefore, you cannot measure voltages between 2 different power supplies.

When we are talking about the DC, usually the GND pin (or the common, as it's most often used) is something, which isn't connected to earth's ground and has completely nothing to do with it.

Therefore, when you have a power supply, which has 2 outputs (or 3 output connectors), there are just 2 power supplies inside the same box, which are insulated one from another all the way to the output connectors, where the Vcc of second one's is connected to the common (or GND) on the output.

I hope I replied to your question.

Not the answer you're looking for? Browse other questions tagged power-supply negative-voltage or ask your own question.

1
Microcontroller to PC via USB - do I need to use isolation?
0
Floating power supply: voltage difference fixed but separate voltages not?
0
Power Supply rail shorts to ground when loaded
1
Logic gate on negative signals
2
Negative Voltage creating Sinking Terminal
1
Power Supplies - Voltage and Current
0
What is the 0V reference for MOV's input protection on power supply?
10
Is it OK to create a negative rail just by dividing voltage with resistors?