The schematic is something like this. Sorry for the fast patch together with paint, but I think this will get the gist across. The component values are not set in stone, so don't worry about the values. I am worried about the general layout and the order of things. 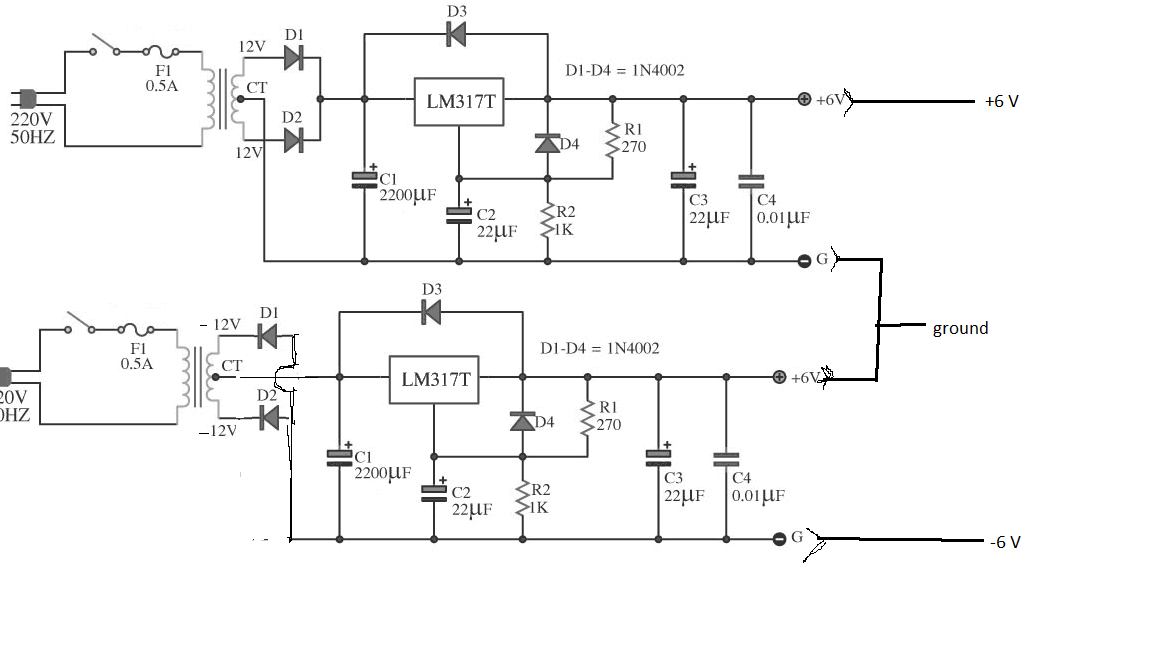 TL;DR: Might work, after tweaking. The proposed circuitry is bad, and the overall principle would be bad, too.

First of all: you've got a center-tapped transformer giving you dual-voltages. So, use a single transformer instead of two. You've got 6V of overhead on both of these secondary half-windings – more than enough to regulate down to 6V (the current capability of the transformer is much much higher than that of your LM317, so you don't need more than a half wave in energy per cycle – or your fuse is far far too large).

Yes, in principle, this can work. You must make 100% sure that the secondary sides of your transformer are floating.

But then you'd have two power supplies regulating the same potential – to the lower LM317, the upper essentially looks like a complex load, and thes will make everything potentially oscillate. So, you'd actually tie what you've labeled "ground" to actual ground.

Now, the LM317 is an old thing, and it's much worse at regulating falling load edges than rising ones – with the effect that your supply's source impedance is um not really defined, and if you draw significant current at changing amplitudes, you'll see nonlinear distortion of the supply voltage.

While you do that, pick something a bit better than the LM317. It's a historical component, mostly used for compatibility reasons and to demonstrate the principles of simplest semiconductor devices, far less often for practical usage.

Not the answer you're looking for? Browse other questions tagged power-supply schematics lm317 or ask your own question.