How to avoid a electrolytic capacitor on a (audio) signal path?

I've built a compressor basing on the all-in-one chip THAT4301. It works well. But I'm still not happy because of the electrolytic capacitor I used in the signal path. My design was based on the reference design of THAT corporation: 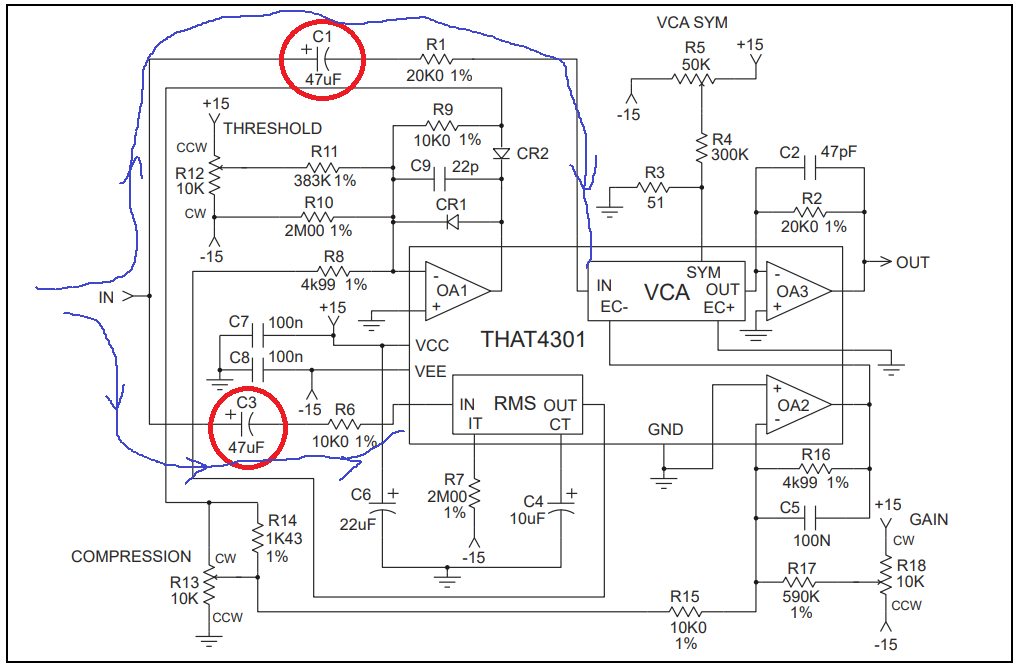 The capacitor above is a polarized type. The signal is not biased before. As far as I know, this is a bad use. I also verified my concerns with a simulation. If the signal really containts a negative DC (which this cap tries to avoid) the cap would/should fail or blow.

So I want to replace it with a polarized type. However there is not really a good/small capacitor with such a high value, so I also would like to decrease its value. My circuit works with 10u and I cannot detect any cutoffs in the LF-Response. Still a big cap in the signal path.

I cannot calculate properly the value of this AC-coupling cap because I cannot find the input impedance of VCA (Voltage controlled amp) in the datasheet. 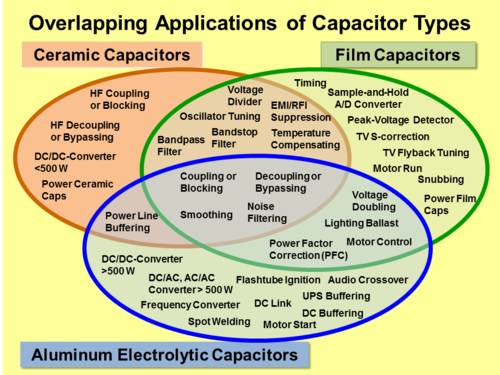 The input is virtual earth (It is basically the inverting input of an opamp buffer, so the time constant is defined by R1 or R6 depending on the channel.

I would possibly use a non polar part there, but really the trick with electrolytic caps as DC blocks is to make them large, a cap forming a pole way below the audio band has by definition little signal voltage dropped across it and thus contributes negligible distortion. Obviously a cap forming a pole in a filter network (Something like a passive crossover) has issues, but for small signal DC block a non polar elco is generally fine.

There is a LOT of crap talked about capacitors, and it IS possible to use the wrong ones in the wrong applications, but a non polar elco there will do just fine in practice.

C. Bateman did the classic work on this stuff back in the day in a series of articles in E&WW, well worth tracking down.

It's a virtual ground. The datasheet says:

As mentioned in the section on theory, the VCA input pin is a virtual ground with negative feedback provided internally. An input resistor (R1 , 20k\$\Omega\$) is required to convert the ac input voltage to a current within the linear range of the 4301.

A small amount of reverse voltage is just fine on a regular polarized wet electrolytic capacitor; it won't "blow" with a few hundred mV of reverse voltage. There is an anodic film on the opposing electrode, it just isn't as thick.

You can replace it with a film capacitor of equivalent capacitance if you really want- it will be very bulky and will cost a lot of money. For example Kemet R60DR54705050K (photo from Digikey): 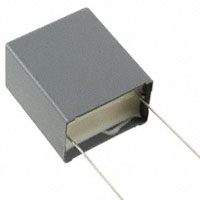 Or you could use a multilayer ceramic capacitor with a reasonable dielectric (eg. X7R or X5R, you can't get NP0 in that size realistically), eg. TDK C5750X5R1C476M230KA which would be relatively small and somewhat cheaper but there might be concerns about introducing a microphonic part in the signal path.

Alternatively you could (say) use an input voltage 10x higher and increase R1 to 200K, and reduce C1 to 4.7uF, which is a relatively reasonable size for a film cap.

But I would suggest just using the inexpensive and perfectly suitable 47uF polarized electrolytic cap the manufacturer recommends.

You probably want something that behaves reasonably linearly- while the capacitor won't have any effect on audible signals when the cutoff frequency is chosen properly, if there are sub-audible frequencies present near the cutoff the harmonics could be audible. That would tend to point against ceramic caps, which have a large voltage coefficient. Film and electrolytic caps are fine.

Agree with earlier response that I personally never use electrolytics of any kind; I feel (perhaps no longer true) that they evolve over time since they are liquid-based. Also, the polarized nature implies that its behavior is inherently asymmetric for negative versus positive voltage drops across it, which to me implies some small amount of distortion and generation of even-order harmonics (though perhaps very very low in amplitude if the capacitance is high enough). I also wonder if the ESR is similarly asymmetric for positive versus negative voltage drops. So I would probably use as many Ceramic caps as I needed to (in parallel and series) to get the voltage and capacitance value I needed.

Also, a trick--if you DID want to use polarized caps like electrolytics or tantalum, you could use two 100uF caps in series (or four 47uF caps, two parallel pairs in series), but orient the series devices in opposite directions, so their + terminals are touching each other. Then, apply a 1 megaohm resistor to this center terminal, giving the other end of the resistor a positive DC bias equal to half the voltage rating of the capacitors. That way, you're using them right at the center of their voltage range, and giving maximum excursion in either voltage direction. And also, any asymmetric I-V characteristics would largely cancel and you'd be left with a symmetric behavior, less likely to generate even-order harmonics.

Two series capacitors of 94uF will give a net capacitance of 47uF. I would also add a 100k from the input to ground, to keep leakages through the cap from letting its DC point drift up in cases where there is another DC block on the incoming signal.

Not the answer you're looking for? Browse other questions tagged capacitor audio electrolytic-capacitor or ask your own question.