Firstly my electronics knowledge is limited.

I am trying to work out a way to use the existing Rheostat (10 ohm) that is used to dim the instrument lights in my 1978 car. I have changed the globes to 12V dimmable LEDs, but the voltage drop on the dimmer is not sufficient to dim the LEDs. I have tested the LEDs and they are turned off at about 4.5V and are almost at full brightness at 10V.

I could use a PWM device with a different trimpot, but I would like to use the existing dimmer switch. I thought maybe an Op amp with a 800mA transistor on the output might work, but I am struggling with that concept. Any ideas or available modification circuitry available?

The 10 ohm Rheostat will be in series with the light, that would work with light bulbs.

Suppose the light bulbs are 10 Ohms in total (that's 10 ohms for all of them in parallel) then with Rheostat = 0 ohm you get full power and with Rheostat = 10 ohms you would get about 1/4 of the full power. (1/4th since the voltage is halved but then the current halves as well).

The LEDs consume much less power so less current flows so less voltage is dropped. Suppose the LED us 1/10th of the original light bulb current then the voltage drop over the Rheostat is also 1/10th. So 6 V (12 V / 2 for bulbs) becomes 0.6 V. That's useless for dimming !

So if we could increase the current back to it's old value then dimming would be much better. What you could do is connect light bulbs in parallel with the LEDs. Those give light and might break. Instead of bulbs you could use resistors, these behave similarly to bulbs but give no light and should not blow either (assuming you're using them correctly).

So what value resistor should you use?

That depends on how much current was flowing originally, we do not want to exceed that current as that will damage the Rheostat. Suppose there used to be 4 light bulbs of 2 W each that is 8 Watt in total

If you do not have one of those lying around, try a 12 V 8 W (or 10 W) bulb, connect it in parallel with the LEDs and see how that works.

Here's a circuit that should work but you may need the help of someone with a little electronics experience to put it together. 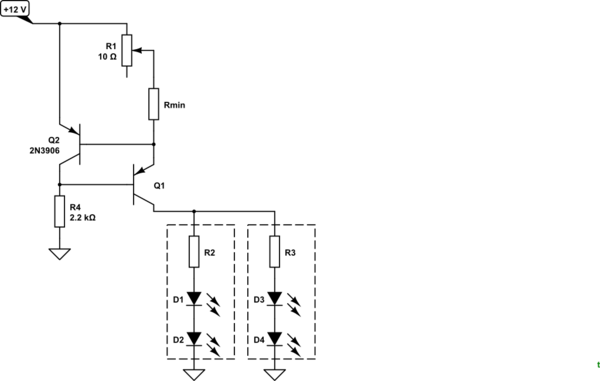 You mention 800 mA in your question so let's say we want to adjust between 80 and 800 mA using as much of the range of the dimmer as we can.

If you want to be picky then recalculate the 10 Ω with 10 + Rmin but I'd be surprised if you could see the difference.

A couple of notes:

You could use a cheap microcontroller (e.g. ATTiny85 or similar) to measure the voltage output of the existing circuit using its analog to digital converter (using a voltage divider to reduce the input voltage to a range the microcontroller will tolerate) and use that to set the duty cycle of a PWM (which the microcontroller also has). Then just use a transistor or mosfet to drive your LEDs from the PWM output.

Well this is what you asked for: an opamp circuit.

U1 is acting as a voltage follower somewhat like using an NPN transistor here. I use an LM317 as it has current limiting and thermal shutdown, and is kind of an easy way to get these.

This is a constant current circuit. It is a bit inflexible since R1 has a fixed value and Vref is fixed, so you don't have too much range to adjust. However it might be in the correct range for you. Note that this is really the same circuit as Transistors, but using LM317 with a 1.2V reference instead of Q2 with a 0,6V reference. So current will be 2x. Again, using lm317 gives thermal protection. If you add D1, then current will approximately halve.

You can run the simulator ("DC solve") to look at the voltages, and see what changing R does.

Not the answer you're looking for? Browse other questions tagged operational-amplifier led or ask your own question.