Fiber-optic transceiver ICs for applications other than fiber-optic Ethernet? [closed]

But since fiber-optic communication is just transmission of any electrical signal in the form of light, I was wondering if there are other transceivers available for fiber-optic transmission, I mean for interfaces/protocols other than Ethernet.

In my search I could not come across any such transceivers. Whenever and wherever I see the word fiber-optic, it is related to Ethernet/networking only.

Any comments are appreciated.

SONET is kind of popular in the telecomms world, very different to ethernet, and kind of cool in its way.

In reality many non ethernet uses exist, but we tend to try to use rates that are close enough to something used by either the phone company or the datacenter because economies of scale make optical modules for those line rates all kinds of cheap.

MADI for example (multichannel digital audio used in pro environments) often goes over 155Mb/s SFP modules marketed for SONET use by the telecom crowd, IIRC it actually runs the line at 125Mb/s, but close enough.

SDI digital video is another example, either at 1.55Gb/s, 3Gb/s or 12Gb/s, again SFP modules that are close enough usually exist.

Particularly with SFP interfaces they usually don't care about the protocol as long as DC balance is not too horrible and whatever you are sending can survive being highpassed at a few MHz (The ALC will stuff up the levels at the the slicer if you go slower then that). Apart from that, generate a PECL version of whatever you like and stuff it into a SFP+ socket, odds are it will work if you pick a reasonable module for the speed you need.

As already mentioned there are many possible communication transport layers possible over fiber optic links. Here is one useful application that uses a fiber optic link to extend a USB interface out to far beyond what is possible with standard USB cabling. 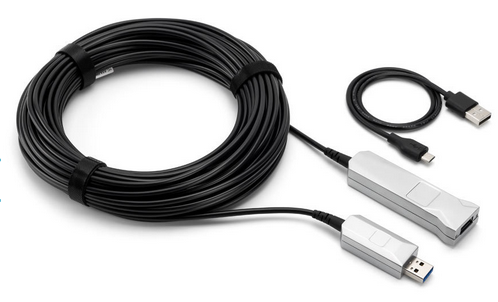 This example shows a USB3.0 link of 50 feet but there are many product options in this space. If you search you can find USB2, HDMI, Ethernet, Audio etc.

There are many other link-layers transported on Fiber-optic medium, apart from Ethernet.

How about S/P DIF, Fiber Channel, Thunderbolt optical cables, to name a few ?

I am surprised no one mentioned good ol' TOSLINK. The simple board-mounted transmitters and receivers for it are available from digikey and the cables are cheap.

TOSLINK technology has evolved over the years. There are general purpose devices for up to 8Mbps and full-duplex SMI transceivers.

Not the answer you're looking for? Browse other questions tagged communication ethernet data optics optical-fibre or ask your own question.