Turning off external sensors with Arduino: MOSFET vs I/O pin

For a project, I made an environmental sensor system, consisting of an Arduino Pro Mini 5V (with ATmega328P microcontroller), a data logger module and three sensors.

To save power between data logs I used several techniques I read about online, including turning off the power to the sensors using a MOSFET (I used the IRLB8721PbF).

Recently, I started reading a bit more about MOSFET's and turning off external devices with Arduino's, and I realized that since my sensors only use about 4mA, I could have used the a I/O pin (set to output) on the Arduino instead.

Now my question is (1) why do I see this short spike to 6 mA increase in current draw when using the I/O pin to power on the sensors? (2) And is it more preferable to use a MOSFET even with low current draw applications and why?

Another thing related to this: I recently read that a resistor in series with the gate is necessary when using a MOSFET, however I have been using the MOSFET for my application without a resistor and I have had no problems whatsoever for more than 6 months and counting. (3) Could someone explain why it has been working fine for my application? Does it have something to do with the fact I use the MOSFET to switch a low current draw load? Or does it have something to do with the type of MOSFET I am using (the IRLB8721PbF).

Thanks in advance for taking the time to answer!

The way you powered your sensors is exactly correct, using an external FET to switch the supply.
I'd almost bet that the difference you see in the current is due to some capacitance in the sensors.

In both situations I am assuming you actually use an I/O pin on the Arduino:

Powering sensors directly from the I/O pins might in the extreme pop the fuse for that I/O block in the MCU. I'd advise against it unless you really understand your sensor circuitry.

For very low current functions such as a real time clock, you will see them controlled directly from an I/O pin. Again, providing you know exactly what the function/sensor circuit is you are taking a risk.

You don't describe your sensors in any detail, but the capacitance I'm talking about is that which would be used on the supply line: 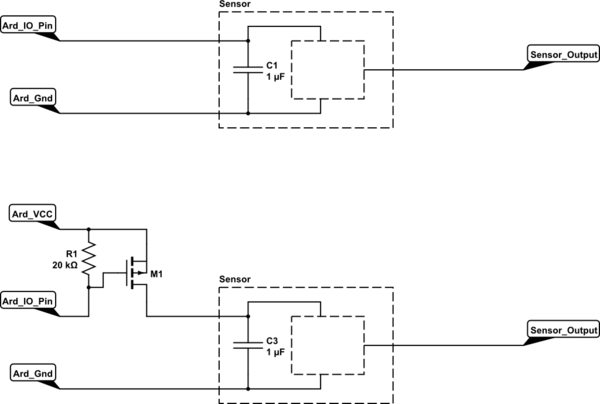 Not the answer you're looking for? Browse other questions tagged mosfet sensor low-power or ask your own question.