Is there any standard (or even a de-facto standard) for TRRS to USB? [duplicate]

I've had a few MP3 players that used a single 3.5mm TRRS jack for both connection to earphones and for connection to a USB port (for transferring music files and re-charging the player.) To that end, these players always came with a short adapter like this image. 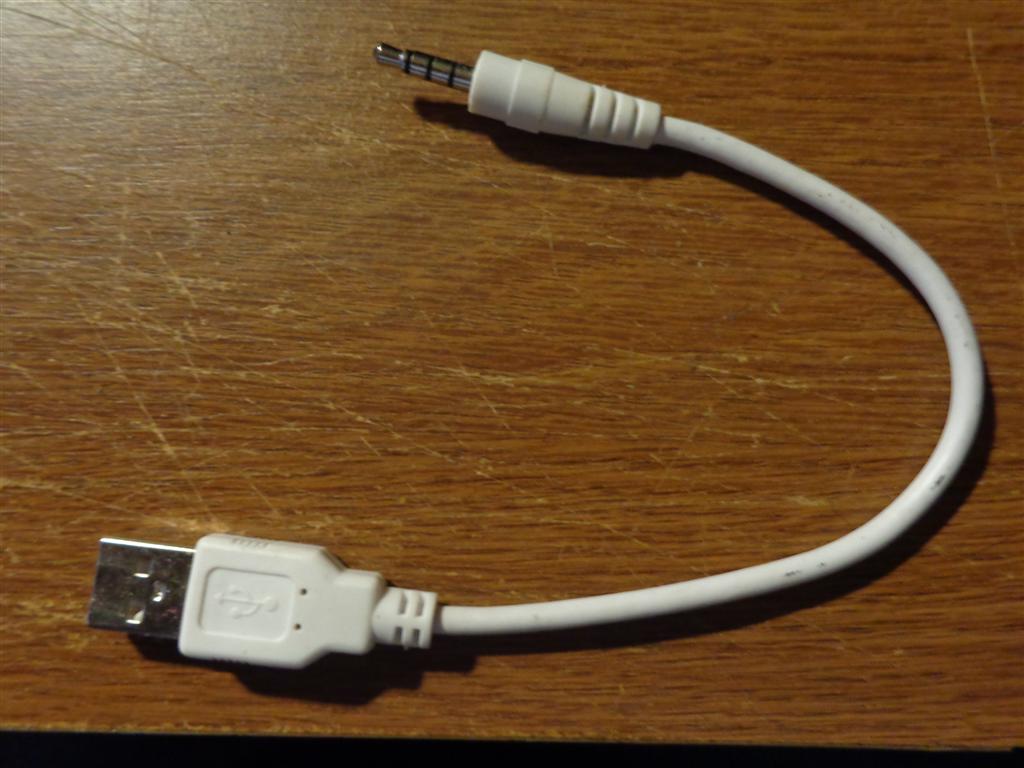 I've traced the wiring in these adapter, and have found them to be straight through (no apparent internal components I can detect). So I would like to use a similar scheme to provide USB access to some of my MCU based projects that are mounted within small enclosures. A TRRS jack has the advantage of mounting in an easily (and neatly!) cut round hole, that takes up very little space. They also tend to be much cheaper than special purpose panel mount USB ports.

But sadly, I don't seem to be finding ANY consistency in the wiring of similar adapters. If there were, I can see where it would be easy to find both female and male versions, but the few I've found have lead to disappointment. Recently, for example, I thought I had a great find on ali-express, a short cable with a male USB-mini on one side, and a TRRS female on the other. Eureka! I thought! Now I'll have an easy connection to my MCU's female mini, and won't have to resort to hand soldering what I put inside the enclosure. But not only did the wiring NOT correspond to the adapter in my picture here, also didn't even have all 4 connections!

So is there any standard here? Have any been proposed? Since lots of those MP3 players used 3.5mm TRRS jacks for their USB access, I would have thought manufacturers would draft some kind of de-facto standard. But GOOGLE is full of diagrams of such adapters, and i don't think I've found any 2 the same. :-(

EDIT: someone kindly pointed me to a similar question, which did at least let me know I wasn't alone in my quest for this, and did point out at least one "pinout' for for a TRRS USB (which was NOT ideal IMO). But I'll let the question stand only because the one referenced was over 5 years old, and the answers were fairly limited. Maybe some things have changed since then, so any new experiences of others will be valuable to me.

EDIT2: I forgot to mention that what was referred to as the "most commonly used pinout in the referenced similar question was indeed the same pinout as the one in my picture, namely...

My player wasn't among those mentioned, so maybe some un-officially documented standard has emerged. The pinout is certainly not ideal for a USB situation, providing way too many opportunities for shorts with the 5V being the shield. It probably was designed to make interface to ordinary earphones easier, because on the female side there would be no 5V on the shield (or "sleeve" ) connection. It still would likely be a useful cofiguration in situations where an MCU already has power from another source, so that would become an NC on the female side.

So... but...if that many companies use this pinout, maybe there is my a hope that som other compatible adapters exist!

Browse other questions tagged usb adapter standard trrs or ask your own question.

10
How do those 3.5mm stereo to mono adapters work?
0
USB connectors inter compatibility
1
Are all USB “audio adapters” DAC's? Can USB ports be used for analog output?
2
Add USB-C Jack to USB Device
4
Why would a USB-C adapter have a pull-up resistor?
2
How to create an airline headphone adapter?
0
Designing a circuit for TRRS Socket