Disclaimer: I'm trying to learn about circuits on my own. I'm reading as much as possible to avoid any basic mistakes, but if there's any, please point it out and I'll investigate further in that direction! Sometimes the problem is not lack of interest, but not knowing what you don't know (if that makes any sense). :-)

I want to build an Ammeter circuit to measure currents with an Arduino. But before I do that, I was planning to build my own current sink, in order to be able to connect it to my regulated power source and be able to draw currents to verify the measurements.

Since I have many LM358Ns, I figured I could try to reproduce the "High Compliance Current Sink" from page 18 in this datasheet.

The maximum current that I want to sink is 100mA. 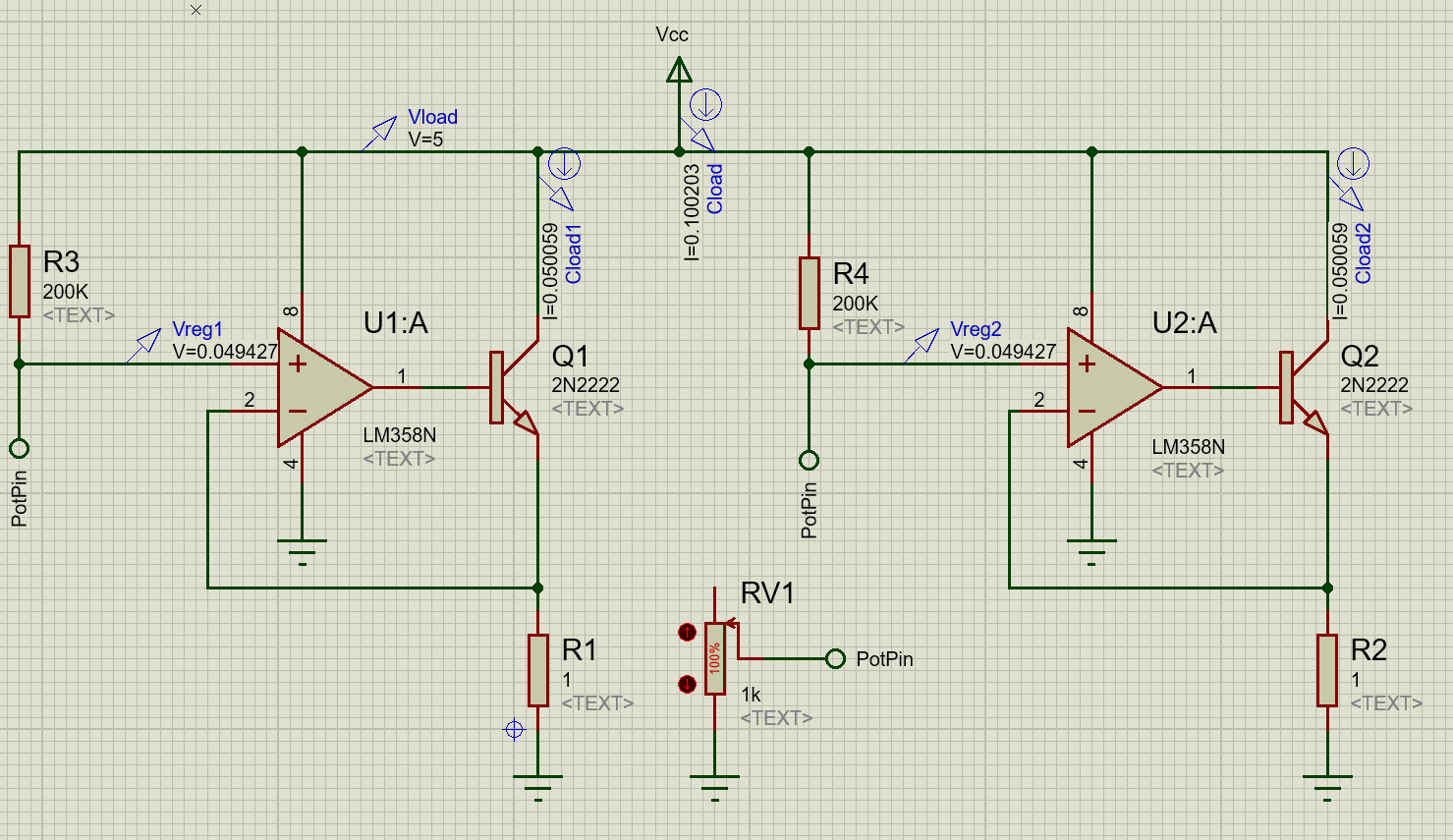 The current values in Cload1 and 2 seem to be perfectly aligned with the voltage in Vreg1 and 2.

I have a few questions though:

And last but not least: let me know if there's any improvement, or anything else that's obviously wrong with either the theory or my implementation of it!

At 5V you should probably be OK. But who knows what the safe operating area is for those transistors... Why not use a 2n3055 after the 2n2222? Then the 2n3055 will never fail at least up to 10V and 2A. Also, be very careful if you replace the transistor with a mosfet in any electronic load. Check the DC SOA curve of the mosfet. [At 10V and 200mA, probably even a BD139 will be fine, and has a hole to attach a heatsink.] Make sure it is in a darlington configuration with the 2n2222, so base current (op amp output) is minimal and will not throw off readings.

As for your question, LM358 has a fairly high offset voltage. Additionally, load resistors will not be matched. So the op amps will settle at different voltages across the resistors. Meaning, different currents through the transistors. Should probably not cause a thermal runaway (as long as transistor SOA is maintained at DC). But, probably better to use a single op amp if you want any reliability between readings and linearity (i.e. single op amp driving 2 transistors, each with its own separate load resistor at emitter).

Why is it a problem? Probably not a problem if an ammeter is permanently attached to collector. Although, it will never be as accurate as placing ammeter at emitter, due to base current coming from op amp. Also, the components will have different temperature characteristics, so results may not be repeatable with respect to the position of the reference pot wiper position. Also, it is mighty inconvenient if you just want to measure voltage at the load resistor and calculate current, since there are two of them.

Since the circuit aims to calculate microcontroller current, I'm guessing accuracy is a requirement, if not at uA range, then at least in 0-5mA range. Probably best to use a TIP122, or a really suitable mosfet rated for linear use. If the circuit is never ever operated at voltages above 10V, an IRFZ44N might be fine up to 1A See my question here. Since no gate current flows into the source, this will give most accurate result.

PS: also, your schematic shows the LM358 running from the same supply. I'm assuming you have a separate regulated source for the LM358 and reference pot.... i.e. they are not connected to the transistor collectors which should be at the power supply under test.

Not the answer you're looking for? Browse other questions tagged operational-amplifier potentiometer power-dissipation current-sink or ask your own question.

16
Is it okay to use a MOSFET in its resistive region with a heat sink?
1
DC operation for IRFZ44 mosfet, SOA curve, max current at 40V?