Where exactly does the power company cut my power when I fail to pay my electric bill? [closed]

Questions on the use of electronic devices are off-topic as this site is intended specifically for questions on electronics design.

Then adding to my confusion is the fact that there are of course multiple power companies, but there seems to be only one electrical grid. How does the company for which I'm paying the bill know that electricity produced specifically by them reaches MY apartment?

This is more or less correct. In fact, you can extend your tree analogy down to the branch circuits off of your electrical panel and the devices you have plugged into them.

At the most practicable location. This can be an electronic remote switch in modern systems, and is often simply disconnected by a power linesman, either at the nearest utility box, or by physically pulling out your meter head.

The company knows my name and my address; so is there some kind of switch in my apartment building with my apartment number in it that the company comes to open? This is unlikely, since how would the company know somebody doesn't go and flip the switch again? Do they somehow control the flow of electricity from the power station? This is again seems unlikely.

Controlling the flow of electricity from the power station is actually what is accomplished by disconnecting the power by a switch or other means. The most important thing to note about the means of disconnection is that it is accessible by the power company, but not by the end user or building maintenance, etc.

Then adding to my confusion is the fact that there are of course multiple power companies, but there seems to be only one electrical grid.

In many areas in order to theoretically increase market competition governments force the company that owns and maintains the grid to allow others to subcontract the sale of electricity.

How does the company for which I'm paying the bill know that electricity produced specifically by them reaches MY apartment?

The power companies don't need to track individual electrons because power use by each customer is measured, and the total output of each generator on the system is known. From this data, power companies can figure out transmission losses.

The companies that don't own the system but sell electricity are acting as a middleman and the only thing of real significance to note as a result is usually that it may actually be cheaper for you to utilize a middleman, which is somewhat counterintuitive.

In the UK system, electricity disconnection for residential customers is a last resort, but they may demand to replace your meter with a "prepayment" one. Either way they can get permission to force entry to your property to do this if necessary.

There is usually a "power company fuse" just before the meter. Removing this disconnects the property.

You can of course just bridge it to get the power back, but that's a criminal offence.

(Some countries have real problems with this system and end up with widespread electricity theft - resulting in high prices, so more people steal electricity. It's a difficult situation to get out of.)

As others have described, power is pooled. In the UK system the retail billing and generation sides can be completely separate. Power can be bought and sold on the "spot market"; the generator company has no knowledge of individual users, just an aggregate figure from the grid authority. There's a complex process by which generators are turned on and off to meet demand, with associated payments.

Some modern meters have a remote controlled switch, that can disconnect your power.

The power company can, with a modern meter, remotely monitor your energy usage and cut the power, is the bill isn't paid.

The electricity company bills you for your usage, they measure this usage at some point. In my house the meter for this is inside my house.

Below this meter there's a sealed box (it has a seal that breaks if you open the box) and that has a big fuse inside it. If I would want to officially be cut off the grid then the utility company could just remove this fuse.

There's a (in my case underground) cable that delivers this power. This cable goes outside my house so the company that manages the delivery of the electrical power will have access to (part of) that cable. In my country the cables go to a distribution point or might be tapped off from a "bigger" cable under the street. Still all in reach of the company.

So for cutting you off there are plenty of options even if the company does not have access to your apartment.

Regarding "your" electricity: there is no electric power generated specially for you. All electrical power is the same. It's all collected on the same system. The company that manages the delivery of the electrical power to your home just measures what comes in (generated by itself, other companies and consumers with solar panels for example) and what goes out (used by you and others).

Everyone adds to and uses from the same "pool of electrical power". That works as it is impossible to determine if the power generated for you is actually delivered to your home. So the company could just say to that "sure we're only delivering your power to your home" as it is impossible for you to determine if that is true or not. And it doesn't matter as power is power.

When it happened to me (and my apartment mate, who ought to have been on top of the bills) they pulled the meter off and replaced it with a blank panel, sealed with a tamper-evident tag. This was in the US, PG&E, about 2000 or 2001. This was one of the glass meters with the rotating dials, which were ubiquitous in the US and Canada at that time. At that location there was no external disconnect switch, as I see are common in the DIY shows from other parts of the US.

So, this could vary widely by region, and time. This is just my experience.

(When we paid up they replaced the meter but added a locking collar on it so we couldn't tamper with it to bypass metering.)

In North America, for residential power, typically pole-mount distribution transformers are used. Those transformers are shared between several houses except in rural areas where the distances would be too great to be economical.

To disconnect service the break has to be made after the transformer, at the low voltage side. That can be done at the pole with a switch or at the meter by taking the meter off, making a change, then putting the meter back on.

Modern smart meters such as the Landis and Gyr Focus AXR-SD can remotely cut off a customer's power by using the RF communications network they use to read consumption data. The base of the meter contains a bistable relay that is driven on and off by a momentary 12V signal. SD here stands for "Service Disconnect". See page 47 in the linked manual.

In an apartment with individual power metering the disconnect would likely take place at the meter. If there is no individual power metering but your electricity is billed separately as a flat sum (perhaps with an adder for A/C) then it would be up to the building managers rather than the power company, and they would break the power in the same way as it would be for maintenance- at a service panel inside or outside your apartment.

Naturally, there are physical and electronic security features that ensure that the power company will know if the meter has been tampered with, and there will be expensive consequences for such actions.

As several answers have indicated, if you have a so-called smart meter, and your local jurisdiction allows it1, the electricity distribution company (who is responsible for providing power to your house) may be able to remotely disconnect your power if the bill isn't paid. This is done by means of an electrically actuated switch inside the meter itself.

In many parts of the world where smart meters are not (yet) installed, you may have a socket meter, like this: 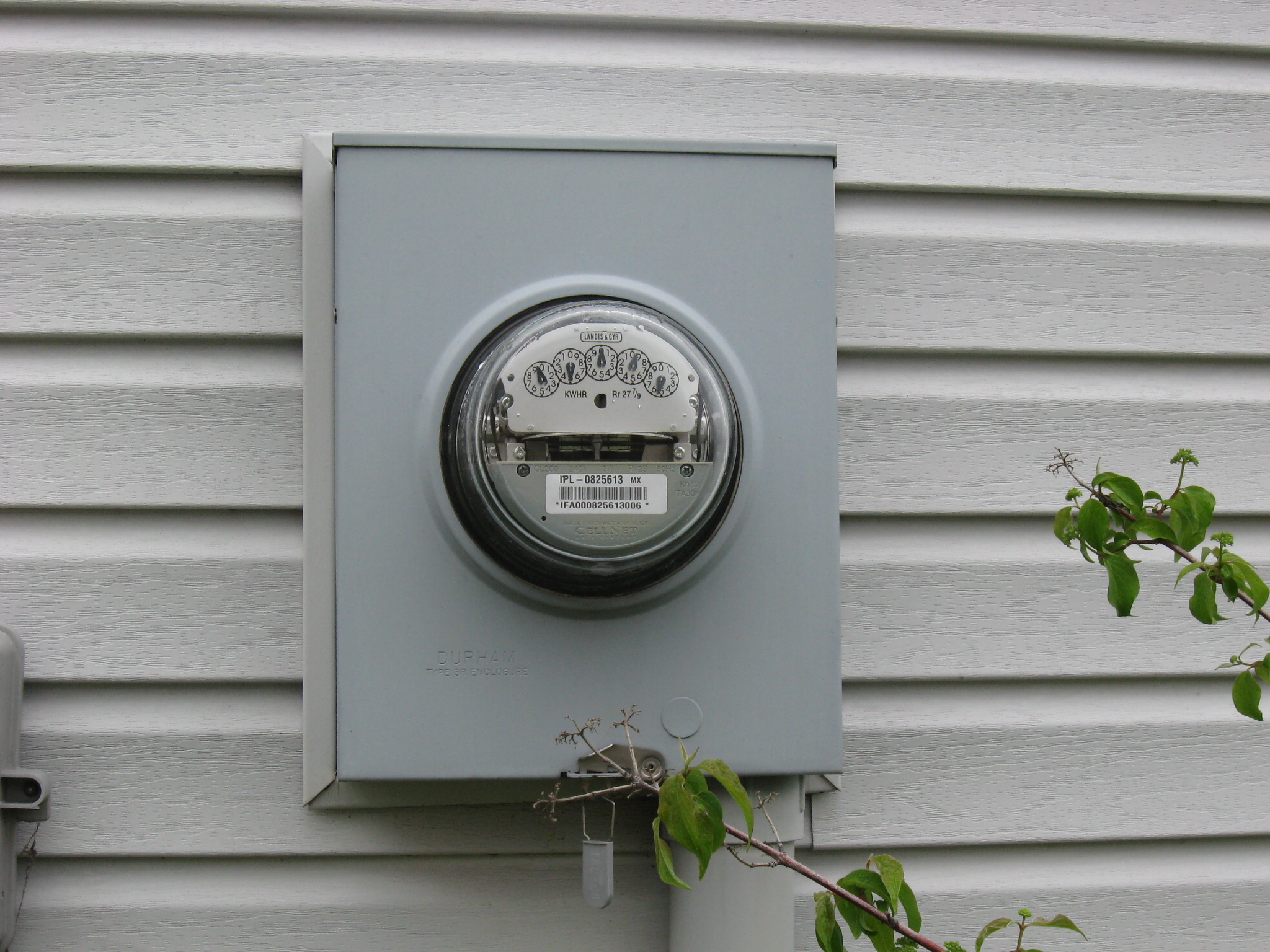 In this case, power can be disconnected by simply removing the meter. The image below is from a question on DIY.SE, and shows how this works inside the meter box: 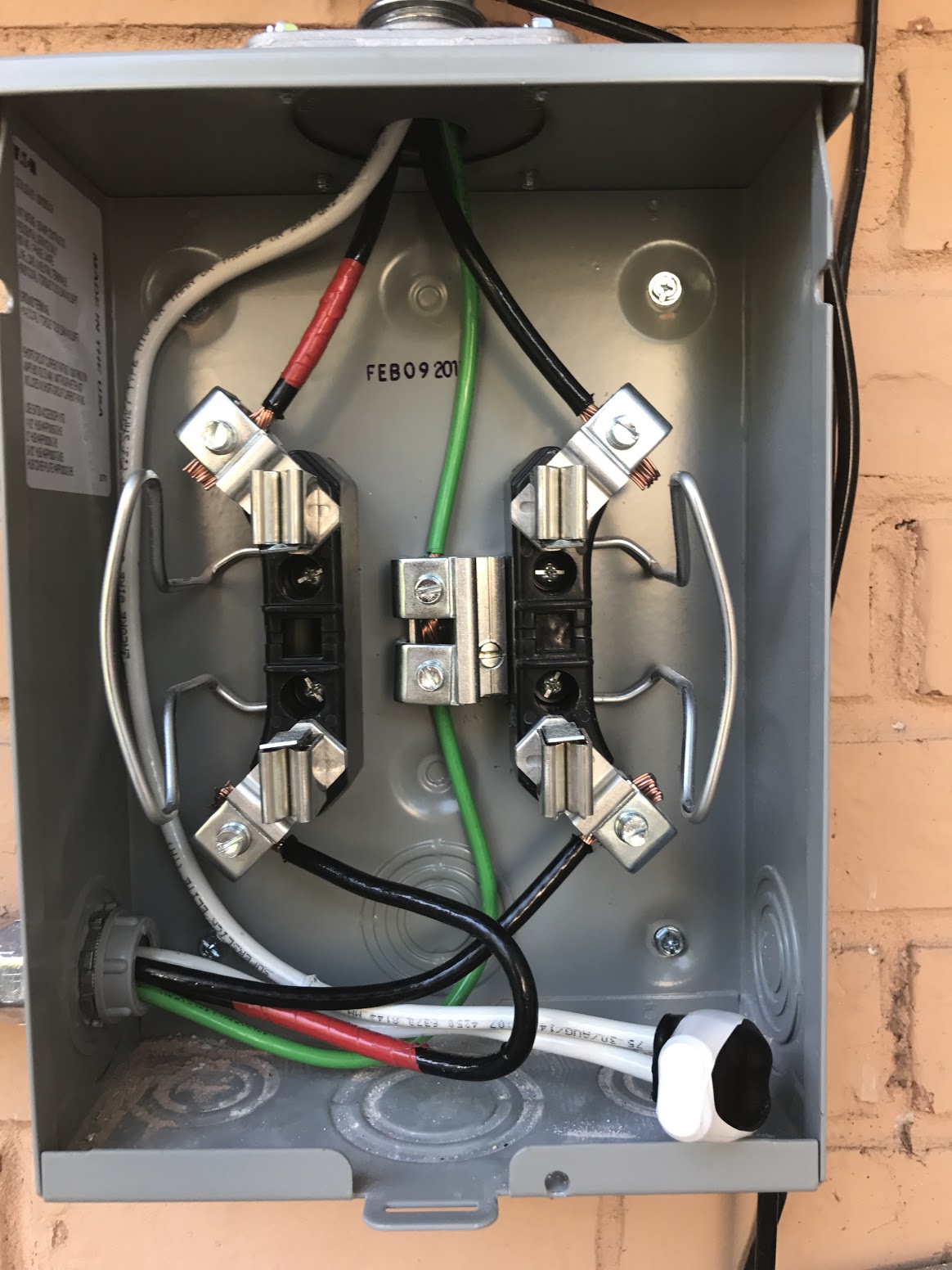 The meter inserts into the four metallic "jaws," which send current through the meter for measurement.

When the meter is removed, a blank plate is inserted and locked in place to prevent tampering: 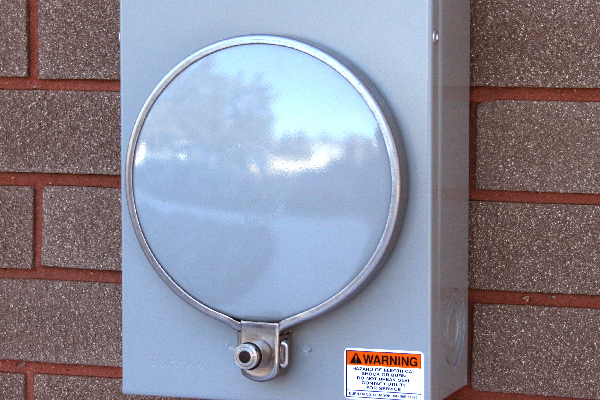 The meter must be re-installed to restore service.

It depends. They can break the circuit at the pole feeding your home if you have above ground service. If it is underground they can break it at the transformer distribution box. I suspect with the new modern remote meter reading technology they can cut it at the meter but that is conjecture on my part.

3
What electrical anomaly can cause RCBOs to trip in apartments in several buildings at the same time?
6
Safety concerns over generic switching power supply units
5
How to control power to a water heater
2
Why electric company sell the electricity according to real power?
2
How to partially drive a load with respective impact on my electricity meter?
8
Does some current return to the power company through ground?
57
Why is main's neutral tied to earth?
3
What happens to the electrical grid when I turn on a heavy load?
0
How do older-style meters still in use keep their clocks synced?