Why can we hear the full range of square waves from 1 Hz-20 kHz, but not sine waves of the same frequencies?

I connected the output (50Ω) of a function generator to a 35 watt 5Ω speaker.

When I sent square wave signals of 1 Hz-20 kHz to the speaker, my friends and I were able to hear them. But when I sent sine waves across the same range, no one was able to hear anything below 100 Hz.

Most people can't hear sinewaves below about 20 Hz. The fact that you couldn't hear them until they got to 100 Hz is probably due to poor low-frequency response in your amplifier/speaker.

Amplitude decreases as the harmonic number increases, but may still be significant out to the 10th harmonic and beyond. 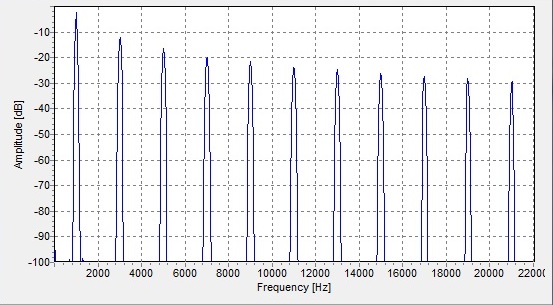 The other factor involved is the response of the human ear.

The ear is less sensitive to lower frequencies, and this gets worse as the sound level decreases. Below the threshold level you won't hear any sound.

If you connected the generator directly to the speaker (without an amplifier in between) then the sound output will be very weak because:-

a) function generators are designed to produce a low power signal (typically 0dBm or 1mW) not drive a high power speaker.

b) there is a large mismatch between 50Ω and 5Ω, which greatly reduces the amount of power transferred.

All this means is that to get a good sound level you need to put an audio power amplifier between the generator and speaker.

All non-sine wave signals can be broken down into a collection of sine waves interfering with one another. This is done using a Fourier Transform. Each of the component sine waves are different frquencies, and when they come together in non-ideal scenarios, such as a real finction generator, they dont quite create a perfect imitation of the signal they are trying to create. So the square wave you're sending through the speaker is not a perfect square wave. Thus you are probably hearing mostly noise and some of the component fequencies as well.

Perhaps you've connected a bare loudspeaker with no baffle (box) around it to your signal source?
At low frequencies, air pushed or pulled out the speaker's front simply whips around to its back, and is poorly radiated to your ear. At a high-enough frequency, this process is foiled by speed-of-sound and you hear a louder sound. A speaker mounted in a baffle-board or stiff wall increases the front-to-back path length, which extends the low-frequency audible response.
And as others have mentioned, a pure single-frequency sine wave ensures that what you hear is a pure tone at the frequency displayed by your function generator. A square wave includes 3X, 5X, 7X, 9X frequencies in addition to the 1X frequency displayed by your function generator. The square wave harmonics (those other than 1X) are more clearly audible than the 1X frequency, for function generator frequencies below about 100 Hz.

Not the answer you're looking for? Browse other questions tagged frequency function-generator square or ask your own question.

3
Need help setting up sweep function for signal generator
2
Sawtooth/ramp waves with fixed amplitude from sine or square clock source?
0
Sine wave generator not working?
2
Peculiar noise when observing a square wave
2
Function generator to test filter capacitors
1
Oscilloscope displaying two voltage levels (on the same channel) for square wave
0
How do I amplify a square wave pulse of 4 to 8 periods at 3.5 MHz from +-2V to +-60V or more?
0
Square wave from comparator drifts and the integrated square wave doesn't yield a triangle wave
0
How can I generate an exponential signal in simulation software?