For a project of mine I need to generate UART-like signals with higher voltage (up to 18V) and a baudrate of 115200 bps and later possibly 250000 bps. I tried a basic BJT level shifter which worked as shown below: 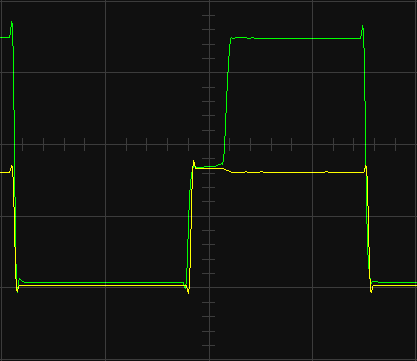 (here and later: yellow in IN, green is OUT, plots are 2V/div and 5us/div)

I decided the delay due to BJT saturation may become problematic at higher baudrates, so I threw in a Schottky diode which helped: 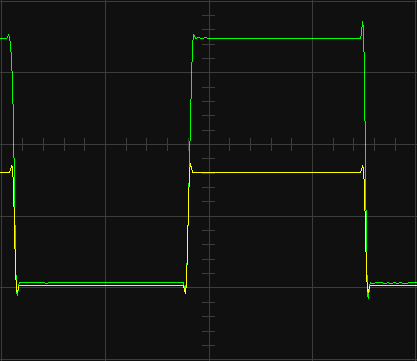 However, that's not how a traditional Schottky transistor is made, and I have seen advice that it's better to avoid saturation in the first place rather than fighting the consequences. So I implemented the third prototype which didn't work as I expected: 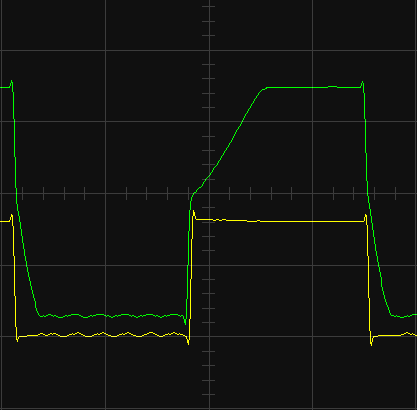 I understand that the higher LOW level is due to the fact that I now avoid saturation, but the shape of the edges is totally unexpected, and can hardly be called an improvement.

Is this how a Schottky transistor is supposed to work, or can anyone offer an explanation as to why it didn't?

Your Schottky diode is in lieu of a Baker clamp, which is like this: 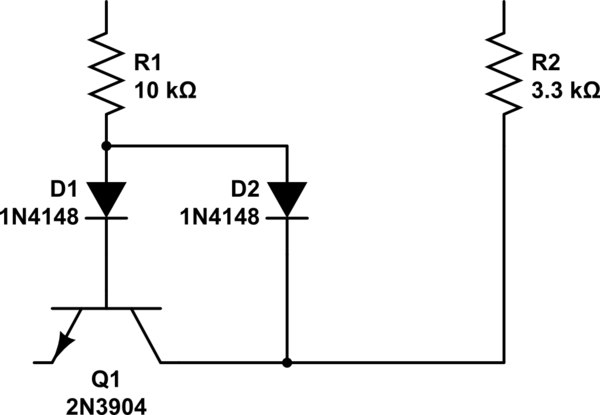 Circuit #2 might be showing the benefit of paralleling the base resistor with a 100 pF capacitor, which speeds up transistor turnon and turnoff, rather than the clamp benefit of reducing base charge storage. Your circuit #3 might be showing the capacitance C-B causing that ramp, so a change of component, from Schottky rectifier 1N5819 to Schottky switch 1N5711, about 2 pF, should help. A small capacitor across R1 is a good bet, too.

The schottky diode between B and C would be more useful if the emitter were grounded and one inputs the signal to the top end of your R1. Then it would prevent the saturation like it does now, too, but it would not slow down the turning from ON to OFF. There also should be a small, say 50pF capacitor in parallel with R1 to make some actual speeding.

This is totally different configuration, it's a common base circuit. As commented, your version 2 works well, it discharges the base fast when the emitter is pulled up and the transistor turns from ON to OFF. Turning the transistor from OFF to ON is fast enough without any speeding.

Not the answer you're looking for? Browse other questions tagged bjt saturation schottky or ask your own question.

31
Schottky transistor, Not sure I understand it?
5
Using a schottky diode to improve PNP transistor turn off time
0
Noise margin of a cascade connection of Schottky clamped transistor and a regular transistor
5
Adding Diodes to Transistor Astable Multivibrator; 1N5818 Schottky diodes work but 1N4148 diodes don't; can't figure out why