Ask Question
Asked 3 years ago
Active 3 years ago
Viewed 154 times
0
\$\begingroup\$
Closed. This question is off-topic. It is not currently accepting answers.

Is there any good replacement for MEMS based 6 or 9 degree of freedom gyroscope to use with Arduino ?

I read that most of MEMS are not reliable regarding the values, with slow reading and high noise effect on raw values.

Here is the link I was reading and quoting:

There is no 'best', the MEMS sensors are all more or less unstable and noisy.

Ring laser gyroscopes are less noisy, but much more expensive and have almost no drift.

Ring laser gyroscopes can be used as the stable elements (for one degree of freedom each) in an inertial reference system. The advantage of using an RLG is that there are no moving parts (apart from the dither motor assembly, see further description below and laser-lock), compared to the conventional spinning gyroscope. This means there is no friction, which in turn means there will be no inherent drift terms. 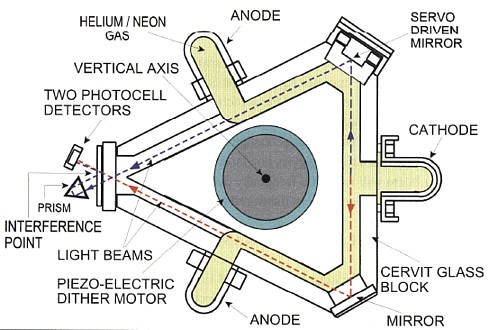 By the way, the gyro has 3 degrees o freedom. Sure there are, like interferometer gyro used in military, airborne, ...they are also more or less perfect. The gyro in the Airbus can't compete with that in F16. As for consumer electronics, the MEMS gyro is very accurate, the unstability and noise is eliminated trough fusion algorithms - Gyro + Accelerometer + Magnetometer = 9 DOF.

P.S.: There are also more accurate MEMS gyros also, see Murata and other, they are industrial type, very precise - also suffer from bias as all MEMS.

Note that even inteferometer suffers from drifting: As the Earth rotates, it makess a 360 deg turn trough the entire day if you integrate the angular velocity output. It's up to you what performance you expect from a gyro.

Not the answer you're looking for? Browse other questions tagged noise mems gyroscope or ask your own question.