Degenerate circuit concept and its theoretical and practical implications

I came across with the term "degenerate circuit" when I was studying solving linear differential equations with Laplace transform. I have learned that a system is called degenerate when the determinant of coefficient matrix (characteristic polynomial) is zero.

I've searched a lot to try to understand the concept of "degenerate circuit" but I could not fully understand it. Some fragments of what I have searched: 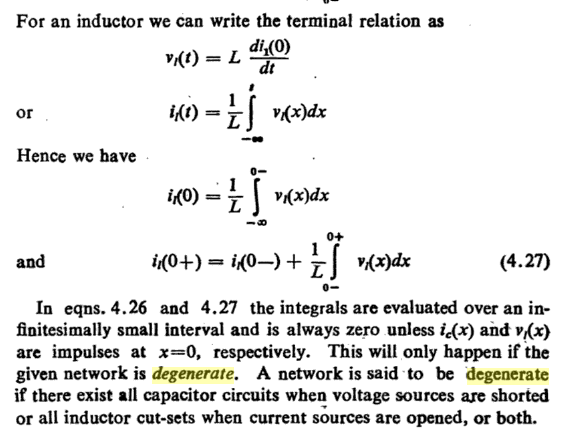 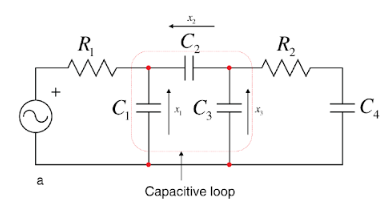 The phrase degenerate circuit does not have a strict meaning out of a specific context. It means that in a certain case, something about the circuit differs in a significant way from the equations that apply to the more general case. Usually this means that, though it may still be possible to use the equations you have developed, they may no longer be the best way to analyze the circuit.

This meaning of degenerate is discussed in more detail at: Degeneracy (mathematics) on Wikipedia.

There is another related meaning of degenerate that you may encounter, which is a special case of the previous definition -- a degenerate matrix is one which is not invertible (Invertible matrix, Wikipedia). This can come up when solving a system of linear equations (KCL or KVL) if you mistakenly use the same equation twice, for example.

Here's a (somewhat contrived) example of how a degenerate case can still use more complicated equations from a general case, though they are not necessarily the best tool. Consider the case of a 2-stage RC filter:

The transfer function, given in hryghr's answer, is

Now, a single-stage RC filter can be considered a degenerate case of the above circuit, with \$R_2 = 0\$. You can plug that into the above equation and get

but the simpler method would be to just analyze the 1-stage RC circuit directly.

0
Transfer function and its magnitude
1
How can I draw a circuit from its transfer function?
2
What is an "origin pole"?
1
Ideal Voltage/Current Sources in the Theoretical Total Resistance of a Circuit
3
BJT Voltage Divider Bias Circuit Theoretical/Ideal Model Help ..LTSPICE?
0
Confusion about Laplace and frequency response of a electrical circuit
0
Difference between ideal and practical ammeter?
4
Why are the measured and theoretical Q factor of an LC circuit very far off?
3
Techniques for taking a transfer function and finding its resonance frequency