Explanation of the circuit in an LED bulb

I just know the basic electronics, not an expert in the area :)

When I dismantled a broken LED lamp, I could see the circuit below (section after the rectifier, the DC part). 15 LEDs in series. There are two such lines. If they were just parallel lines I know how the circuit works, but they are inter connected here. 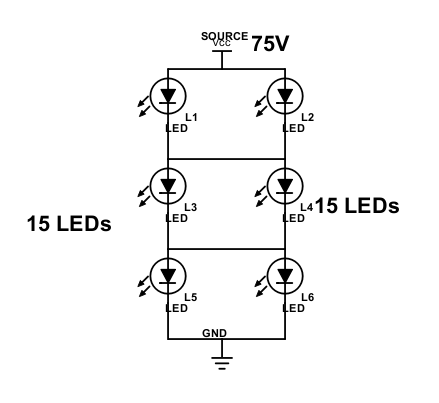 Two of the LEDs in a row were broken, So I thought of adding an equivalent resistor value as I did not have the right LED with me. Then the bulb started blinking when powered. Then instead of resistor I just shorted the position of broken LEDs and now it works.

Can anybody explain me the working of this circuit, especially what happens when the parallel lines are interconnected?

LED bulbs usually use a current source. That is a driver that provide a constant current through the LEDs. Putting the LEDs in series is then the logical way to connect multiple LEDs to the same driver.

The reason the leds are put in in a series string of parallel pairs is to add some redundancy if one LED fails and to avoid mismatched LEDs making one string brighter than the other.

If you short out a single LED the voltage across them all will be dropped by the driver so the current matches what it was programmed to emit. The matching led will not light up anymore.

The reason it started blinking when you replace an LED with a resistor is because the driver will have open circuit detection and reset itself if it cannot supply the voltage needed for the current it wants to drive.