Wikipedia describes Joule Thief, shown below, as a circuit that can be used to provide constant load even when voltage of a battery decreases. At least that's what I think the article means. 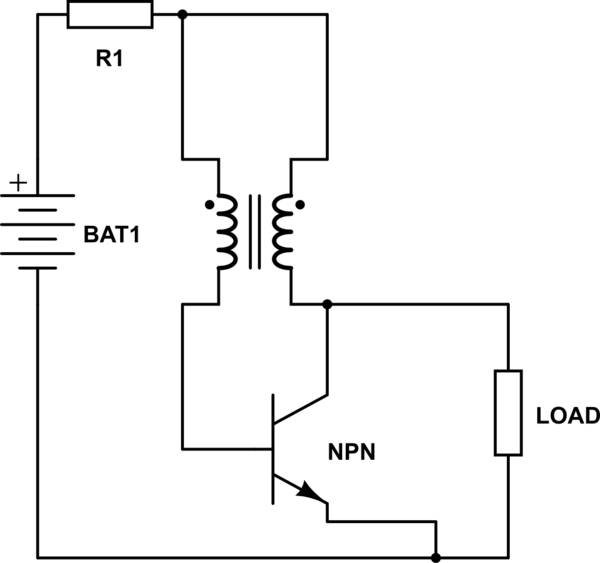 The question then is: Is this circuit a (mostly) constant current source? Or does it maintain constant voltage? How does one calculate the current/voltage at the load given a resistance RLOAD?

You have the circuit diagram slightly wrong. The collector winding is connected to the battery terminal, not the resistor. The windings should be opposite polarity, not the same. 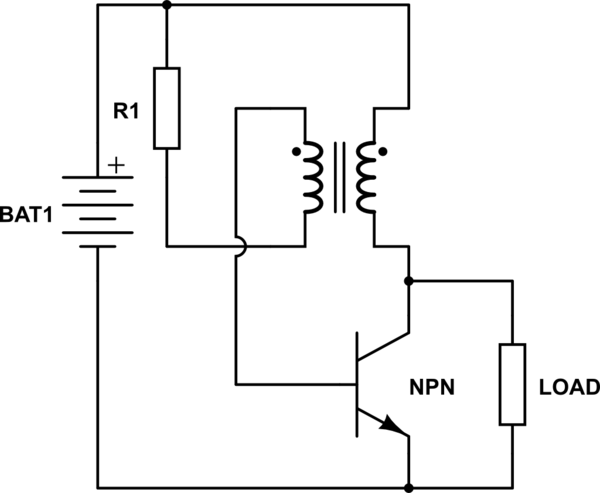 It's a pity that the circuit editor only comes with a co-phased transformer, as this wiring looks untidy.

The output comes from magnetic energy stored in the core of the inductor, operation usually described as a flyback. Being an inductor, the output tries to rise to whatever voltage is required to push its current through the load. It's therefore best to call it a current source. That's why it makes a good LED driver.

During the transistor on phase, the current builds in the inductor, and at some current (supply voltage dependent) the on phase finishes. This current now flows through the output, decreasing as the voltage on the load ramps it down again. Calculating the average current is quite complicated as it depends on the on and off time, which depends on the load voltage. So the average output is not truly constant.

In addition to forcing current through the load, it also has to charge the various stray capacitances. With a very large load resistor, these capacitances may dominate the maximum voltage that could be obtained. With a high enough output voltage, the transistor will break down, so this circuit should newer be run without a load.

It's basically a low-tech switching boost supply. If you correct the polarity dots on your transformer, it will self-oscillate, as an increase or decrease in collector current induces the opposite effect on base voltage. When it's on, the base voltage increases until the current stabilizes. Eventually, both sides of the transformer are pulled to saturation on the feed side, and there's no current increase to maintain the base voltage. At that point, the current through the secondary has no place to go, and the inductor lag raises the voltage to whatever is needed to get it somewhere. (Unloaded, it will probably toast your transistor.)

Note that the voltage out will be dependent on load, so it's not a regulated supply.

A joule Thief is always used to light an LED that clamps the output voltage. I think the current is higher with a higher battery voltage but it still works with a low voltage causing a low current.

Not the answer you're looking for? Browse other questions tagged power-supply inductor current-source or ask your own question.