About the impedance matching problem of this circuit

This is part of the pulse output circuit for cable fault location, but the pulse signal output to the cable is suppressed. I guess the reason for the impedance mismatch, but how can we achieve the match? Is it a series or parallel connection of a resistor directly at the output? 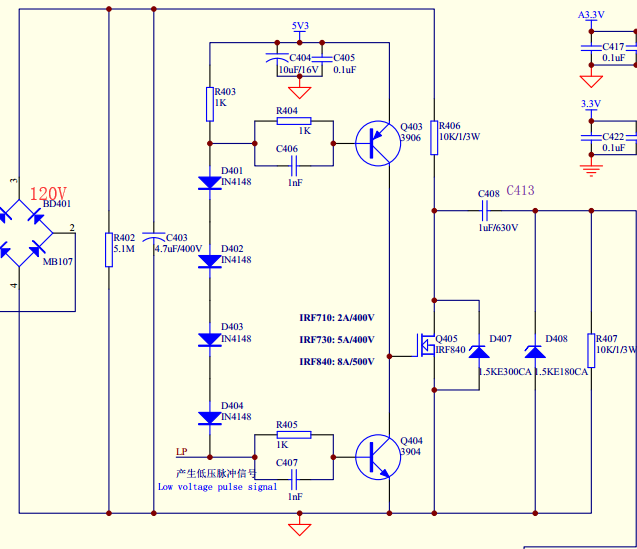 That circuit is very assymetric between its low-going and high-going impedance. Adding just a resistor somewhere will not "impedance match" it to any cable.

This circuit is intended to test the cable with a single edge, not a pulse. The only thing drawing the output high is R406. At 10 kΩ, that's way more than the impedance of any cable you will find.

Everything is intended to stabilize, then the circuit is triggered to cause a falling edge. Since that edge is AC coupled, and R407 keeps the cable at 0 V in steady state, the edge will actually be negative on the cable. The propagation and reflections of this single edge are then measured.

D408 clamps the amplitude of the falling edge on the cable. Perhaps this is to provide a more known pulse amplitude.

Since everything that is measured will occur between the outgoing pulse edge and any returning reflection from the far end of the cable, there is no need to terminate at the sending end. The driver is essentially 0 impedance. That means anything reflected back to the driver will be reflected back again onto the cable with negative amplitude. Presumably, the measuring circuit takes that into account.

If you really want to absorb returning reflections, you can add a resistor in series with the cable. However, now you have to know the characteristic impedance of the cable.

Or, this is just a badly designed circuit. You didn't say where this device came from, so maybe it's just not a competent circuit. There is some significant evidence of this:

You didn't say where this circuit came from. I originally took it at face value and assumed this was the circuit in some tester you were using. Given the many indications of bad design, this must be a jig in your lab someone who didn't really know what they were doing cooked up. In that case, the correct solution is to go back to whatever problem it was originally trying to solve, and design a proper circuit to solve it.

You don't mention the cable impedance, but if it's less than 10K the rising edge of the pulse is going to be pretty slow. If it's a low-going step and you don't care about the rise time, I don't see an issue. If you want a fast pulse, however, you should use a push-pull driver.

Not the answer you're looking for? Browse other questions tagged impedance impedance-matching or ask your own question.