In a Generator, why when the Exciter voltage increases the Generator Voltage decreases?

I have a project where I have to build an electrical model of a generator with constant torque at 1500 RPM and simulate it in LabView.

I have a manual that describes some measurements that were made on the generator while operating at certain values, and something that is very odd to me is the fact that when the Exciter's voltage is increasing, the output voltage is decreasing.

Here I'll attach a table that shows some sample values. 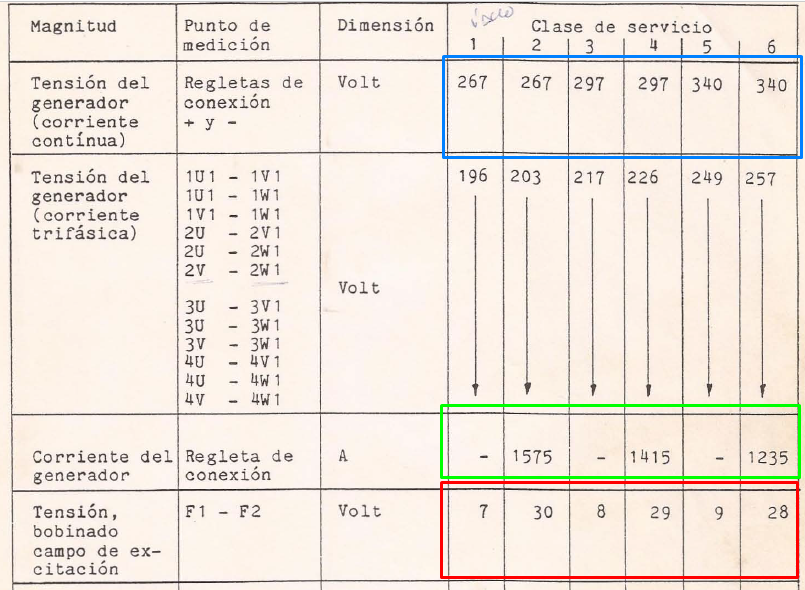 I can see that the voltage-current relationship maintains a semi-constant power of 420kW Approximately, but when modelling this generator I don't know how to obtain a similar behavior like this one.

Also, Calculating the output impedance (with Z = V/I ) would help me when creating my model?. I considered that but I'm not sure where should I place it.

There are two sets of conditions tabulated in that table, open circuit voltages (7V exciter, 267V output, 8V exciter = 297V output and 9V exciter = 340V output), so about 37V at the output per volt on the exciter terminals.

We also have a set of values under load :

Now all of these values equate to about 420kW, which more or less makes sense for a constant torque on the prime mover.

Using our earlier estimate of a factor of 37V/V for the voltage scale factor a naive model would have the following output voltages:

So what accounts for the difference?

Lets try modeling it as a series resistance (Or series inductance so it does not dissipate power), I will use the resistor model to demonstrate, but the inductor is probably closer to reality.

So it looks to me like an acceptable model (for some things) is a dependent voltage source having a gain of 37V/V in series with a resistor or inductor having an impedance at the operating frequency of ~0.55 ohms.

What you are seeing is that the voltage drop across the machines impedance is at some currents greater then the extra terminal voltage from the increased excitation. It is interesting to draw a load line for constant power output and to plot on it the required exciter current to hit that power level for various load impedance values.

Not the answer you're looking for? Browse other questions tagged generator labview or ask your own question.

1
DC motor as a generator: characteristics
1
simulating a lightning generator
1
Generating electricity by moving door handle to produce 3 Watts?
0
Voltage drop in a Permanent Magnet Generator
0
Brushed DC motor as generator, characterising the motor
1
Having difficulties running AC compressors from a generator on a boat
0
Is there a limit for voltage a PM generator gets to based on RPMs?
0
What factors affect the voltage drop in a basic ac generator when an additional load is added in parallel
1
Designing an automotive alternator's voltage regulator - how to avoid magnetic saturation in the rotor?