I am a scientist, and I have found myself needing to interface two disparate pieces of equipment.

I have a precise, automatically controlled current source that I wish to interface to a very expensive piece of equipment. The current source and its controller are designed under certain assumptions, namely that the 14 channels of its outputs have the same limit. My device, naturally, has different limits. I can't alter the logic of the source -- it's a black box. Of these 14 channels, 4 have a ±1A DC limit at ~60V, and 10 have 0.75A a

I want some sort of accurate fuse that I can use on the different channels: initially I thought of just "coping out" and using PPTC polyfuses -- our load is mostly inductive 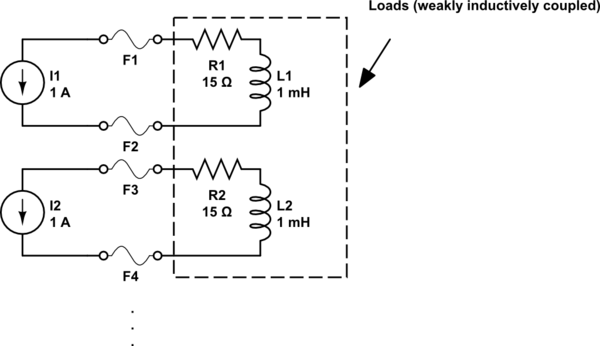 However, try as I might I can't find a PPTC polyfuse with a hold current of anything greater than half the trip current. This would cut the functionality of our device a lot, and the typical 500 mA hold current / 1 A trip current curve of a polyfuse would be far from ideal as we'd be operating quite a lot of time in the undefined behaviour in between. I really want it to go at something like 1A ±50 mA, not +0/-500 mA!

Is there a standard "better way" of doing this? I could go overkill and find a sensitive current monitor, ideally one with an analogue output going to a comparator, tripping a solid state relay if necessary.

Edit: The device generates magnetic fields in a spherical harmonic basis. There might be some induced "noise" on any of the lines, which would be caused by parasitic induction from a ~75A arbitrary waveform going through loops of copper nearby (in either direction) on a typically ms timescale.

The idea is to protect the device against getting physically burnt out either via a fault or through inappropriate driving. The expected use case is almost DC current drive: there's a 16 bit DAC driving the output and typically it's changed by ~mA on a ~1 s timescale and then left DC for minutes or hours. I'd like overcurrent protection on the scale of ms to 1 s rather than 10s of seconds.

As PlasmaHH commented, fuses are for gross overload protection. They are not remotely precision devices. Worse, since real fuses operate by thermal overload of the fuse element, their trip point depends on the required operation time. That is, there exists some current for which the fuse will blow after a very (theoretically infinite) time. For any current above this level, the greater the current the shorter the operation time. And the relationship is not linear, either. On the plus side, there is little effect from ambient temperature, since the fuse temperature is so high that the rate of heat loss to ambient is essentially unaffected by normal ambient variation.

Of course, you can roll your own. The conceptual circuit looks like 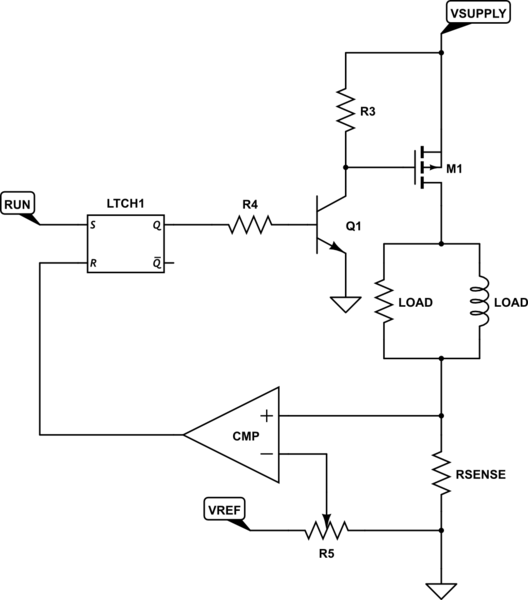 Here, the load current is sensed and compared to the desired trip level by CMP1. The latch has been set by temporarily setting the S input, and the output is high. This drives the level-shifting transistor Q1, and the FET is turned on hard.

When the the load current gets too high, the comparator goes high, the latch is reset, and the FET is turned off until another RUN command is issued.

In principle, you can get sub-microsecond operation with extremely repeatable trip levels.

The devil is in the details.

You could consider using the LTC4368 protection IC, which can (just) handle 60V operating voltage. See also the symmetrical version as @Tony points out. 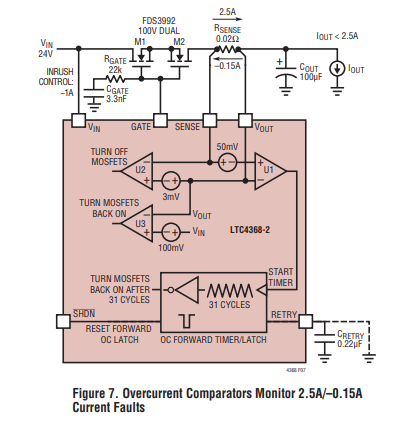 61
How to choose a flyback diode for a relay?