We tried to connect outside light bulp (AC) to a switch where an another light bulb is already connected. We did a parallel connection. Roughly like in the schematic. (I'm not an engineer so the schematic can be wrong). 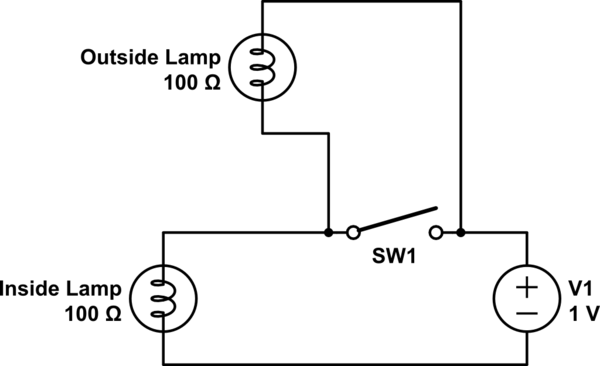 If the schematic is correctly drawn, the circuit works like this:

When SW1 is open, the current has to go through both lamps. The lamps are in series. If the resistance of each lamp is the same (this resistance is temperature dependent), each lamp will have half the voltage it should. Probably enough to light them up, but not at full brightness.

If one lamp is emitting light and not the other, it's probably because of a temperature difference, or minute differences in the filaments during production. Both lamps are effectively passing current, but one of them is cool enough that you don't see the glow.

It is highly unlikely that this is how the lamps are supposed to be wired.

I suggest that you hire a professional for this job. Doing electrical wiring when you don't know exactly what you're doing is dangerous. It can lead to the house burning down. Or someone getting electrocuted. It's not somehing to be taken lightly.

Not the answer you're looking for? Browse other questions tagged switches ac or ask your own question.

2
how to connect relay and physical switch to control light
1
Reverse momentary N.O. Switch behavior using PNP Transistor?
0
Controlling AC mains using Arduino and removing control easily
1
Why is my circuit not working?
6
P-channel MOSFET as high-side switch gets hot
1
Using PNP as OFF switch
1
How can a switch that is in parallel with a lamp affect the lamp?
2
Use current from SMD LED to switch larger current
1
Override One Lamp in a Four-Lamp Circuit Using Transistor?
1
How can I make a phantom power mic popless mute switch?