How to increase the dimming range of mosfet controlled LED

I'm slowly getting into circuits and I've put together a PWM LED dimmer. The led is driven by this circuit: 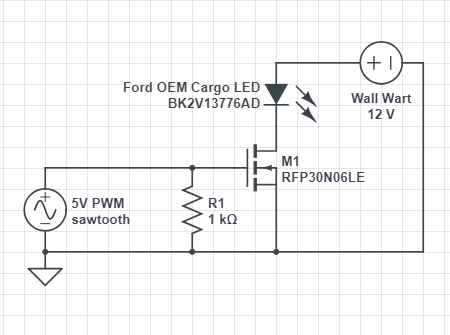 Whenever I set the dim value to 100 (100% duty cycle), the led is shining quite brightly, but when I set the value to 0, the LED shines at probably 60% brightness.

What would I have to do in order to smoothly transition the LED from a fully OFF state, to a fully ON state?

After a discussion in the comments I've updated my code and circuit and something seems wrong. The following code and schematic pair give me the best dim range (visually maybe 10-100% total output) and works on multiple mosfets from my package. 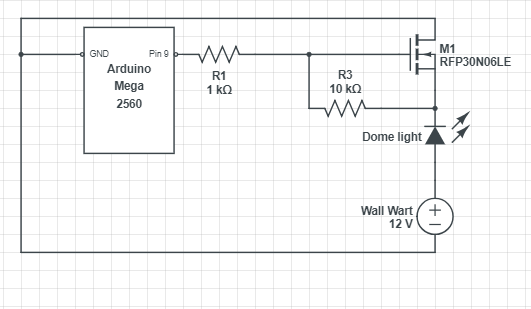 My MOSFETs are labeled P30N06LE which correspond to this RFP30N06LE datasheet. And unless my fets were made incorrectly, my drain really does go straight to GND, and my LED negative feeds into the source. The problem I have now is twofold: 1) understanding why my circuit works this way and 2) getting my led to fully power OFF when setting the pin to LOW.

With the above configuration, when pin 9 is set to LOW, the LED is at ~10% brightness, and when I physically remove the wire from arduino pin 9, the LED shuts off completely. If I then plug the wire into various unpowered pins, the LED shines at a low brightness, indicating enough voltage is present to power the fet. How can I get the led to turn off completely?

For troubleshooting, I would take the received serial value out of the equation. Just set t = 0;

This is what I suspect may be happening.

This answer required too many assumptions because the received values were not explained. But it is a possibility if the MOSFET is working correctly.

I've got an HM10 BLE module connected to the arduino. I'm using the android app BLE scanner (for testing). Once I connect I'm sending a write request to the HM10's custom characteristic. The arduino is reading the bits and parsing the integer and then sending the data straight to the PWM pin.

If I understand correctly you are using a single serial ASCII character for your PWM values.

What you do not explain is the possible values that are received on the serial port.

That would make sense that you are actually sending a "0" (value of 32) rather than NULL (value zero). Your eye could easily misinterpret the difference between 32% and 60% luminous intensity.

I do not understand why the analogWrite(led, t); is inside the
if (Serial.available() > 0){}.
You could only send a single character to change the dim level if the
analogWrite(led, t);
was not within the if brackets.
I think you are unnecessarily sending a continuous stream of characters.