What are these SOT23 components in this RPM gauge circuit?

I'm trying to work out the input portion of the input circuit on a digital RPM gauge. It accepts a W input from a standard automotive alternator. 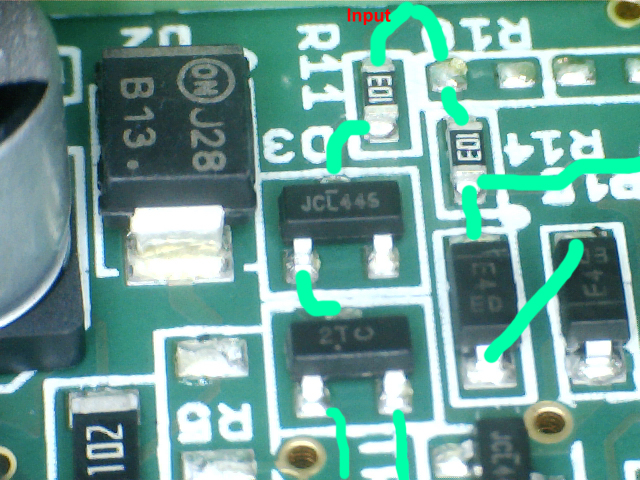 I can't identify the JCL446 which only uses two of its pins, the 2TC or the E4ED diodes. What are the SOT23 ICs likely to be?

While I cannot find an exact match for the JCL446 in the SMT codebooks I checked -- JC seems to map to a BAW56 dual diode or a BAL74/BAR74 diode, and this would be consistent with only two pins of the component being used, as well. I would verify this theory with the second JCL part extending off the bottom right of your photo, though. (It's also consistent with the part having a reference designator of "D3" on the board's silkscreen.)

The 2T is pretty definitely a MMBT4403 PNP transistor

According to multiple datasheets, the 2T top mark is used for the MMBT4403 PNP small-signal transistor -- if it checks out as a PNP, then it's pretty definitely a MMBT4403.

And the E4's are pretty definitely MMZD5234 zeners

Again, according to multiple datasheets, the E4 top mark is used for the MMZD5234 6.2V zener diode. (If it's a Diodes Inc part, for which the full top marking scheme is an exact match, then the "ED" is a date code for December 2017.)

Not the answer you're looking for? Browse other questions tagged identification alternator rpm or ask your own question.

2
How to identify SMD devices from the codes on top of the component?
4
3 Phase alternator to charge batteries
0
How to monitor an Alternator exciter wire with MCU?
2
Help Identifying a component for PCB repair
3
To what extent are alternators “flexible” to variations in input speed and output voltage?
0
Attempt to build DIY high current power supply from car alternator?
2
What are these two 3-pin components in a high voltage board?
0
Difference between analog and digital rpm controller