I was trying to analyse and understand the following circuit. 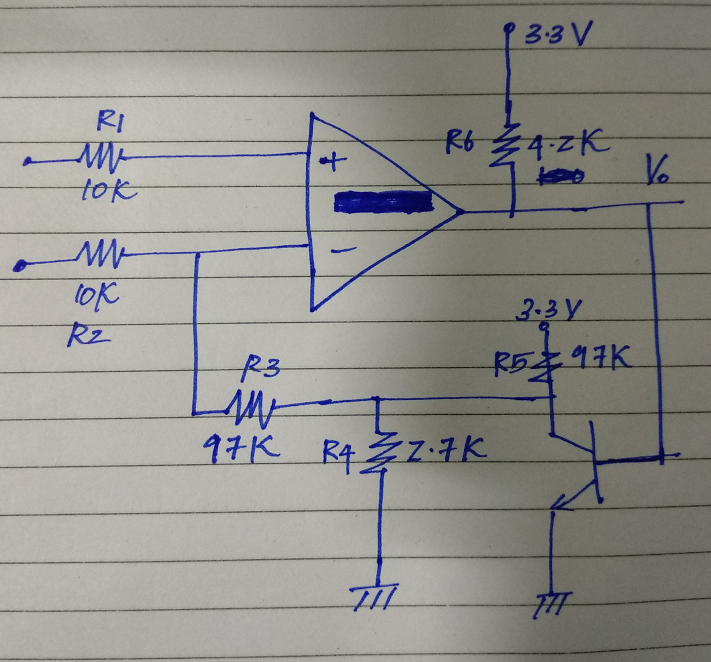 My intention was to calculate the hysteresis of the comparator.

Circuit working: For both compartor input, there will be voltage inputs ranging from 40 mV to 250 mV. This will vary as per the connected circuits and will trigger the output of the comparator either as HIGH or LOW. I have worked on comparators with one input pin as fixed-reference voltage and other pin as the varying-input voltage.

For me this seems bit new and I was not able to understand the working of the comparator completely. Basically I am looking for a guide to calculate the upper and lower threshold and finally the hysteresis.

Could someone help me with this.

In this circuit the transistor acts as a switch which shorts R4 or it doesn't.

The approach to finding the levels at which the output switches is to distinguish the two cases:

1) when the transistor is off

2) when the transistor is on

When the transistor is on (case 2) the right side of R3 is connected to ground so you can ignore R4 and R5.

After simplifying the circuit it is simply a matter of finding the situation where the + and - inputs of the comparator have the same input voltage.

Not the answer you're looking for? Browse other questions tagged transistors comparator hysteresis or ask your own question.