How do we modify the equation in such a way that we can eliminate the R^2 on the LHS of the equation? An online source gives me an explanation in this form: 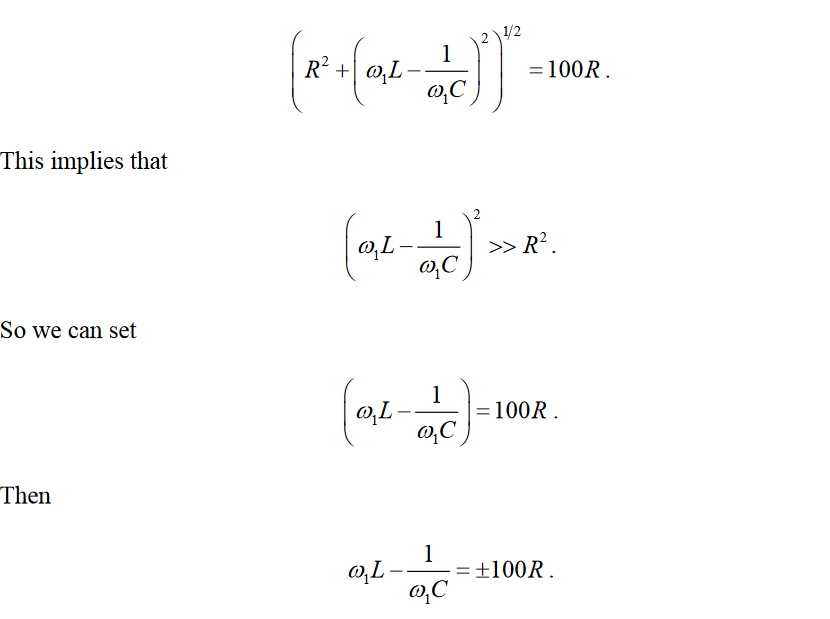 My question is, what is the reason behind taking the LHS of the equation within the square root and equating its inductance and capacitance variables as greater than the resistance variable? How is this exactly implied? 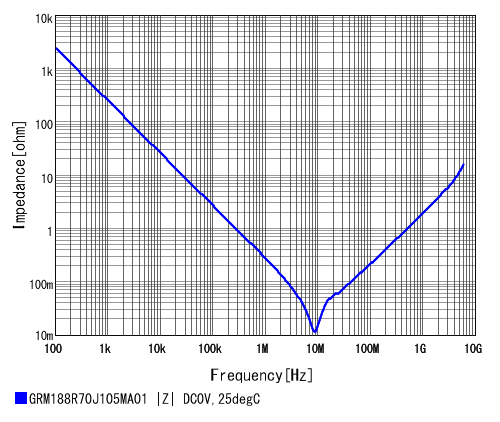 This kind of behavior is fairly common, because there will be some frequency below which the capacitive effect is dominant, and there will be some frequency above which the inductive effect is dominant, no matter what the resistance value is. (It is, of course, possible to have a much wider band where the resistance dominates than in this example, but there will always be upper and lower limits to the resistive band)

Your equation: $$(R^2 + (\omega L - \frac{1}{\omega C})^2)^{\frac{1}{2}} = 100R $$ has the form of: $$\sqrt{R^2 + X^2} = |Z| = Z $$ which defines the MAGNITUDE of Z, where X is reactance and R is resistance. So we can say 100R is the magnitude of the impedance. Notice the equation above looks alot like the pythagorean theorem where resistance is in the horizontal direction and reactance is in the vertical direction; it forms a triangle with Z as the hypotenuse. Just focusing on the LHS, reactance (X) takes an $$\omega$$ variable which is the frequency of the circuit whereas R, L, and C are constants of the circuit and therefore do not change over the operating lifetime of the circuit. The above implication: $$(\omega L - \frac{1}{\omega C})^2 \gg R^2$$ is just analyzing the edge case when the frequency of the circuit is massive. You could also take the frequency really close to zero and you'll see the implication above still holds! This is just a method to analyze edge cases of a circuit.

So to tie into the triangle visualization, when making the frequency massive or super small, the impedance triangle starts to look like a straight vertical line. Thus $$X = |Z|$$ $$ \omega L - \frac{1}{\omega C} = \pm100R$$

Not the answer you're looking for? Browse other questions tagged capacitor resistance inductor passive-networks resonance or ask your own question.