In my first experiment, I wired the amplifier in series with one of the resistors and an inductor which I had wound myself. The inductor has an equivalent series resistance of 1.1 ohms and an inductance of about 3 mH at a frequency of 50 Hz. (The inductance was calculated using the method shown here under the section "Measuring with a sinewave"; I found the phase angle between \$V_x\$ and \$V_g\$ to be \$-20.56\$ degrees.) The circuit is diagrammed below: 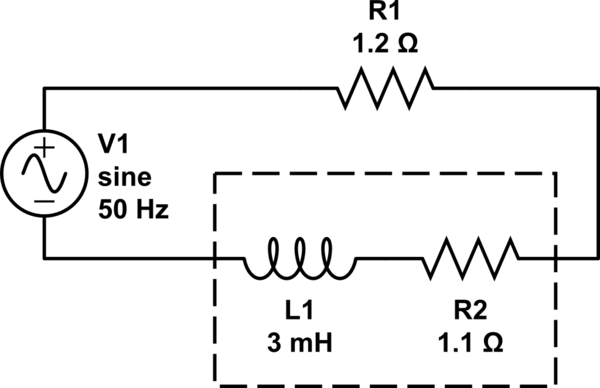 This was much lower than the wattage that the amplifier was rated for, so to determine whether it was something to do with the inductor, I made the load purely resistive. In a second experiment, I wired two of the PWR247T-100-1R00F 1 ohm resistors in series and connected them in series with the amplifier (no inductor at all). The circuit is diagrammed below: 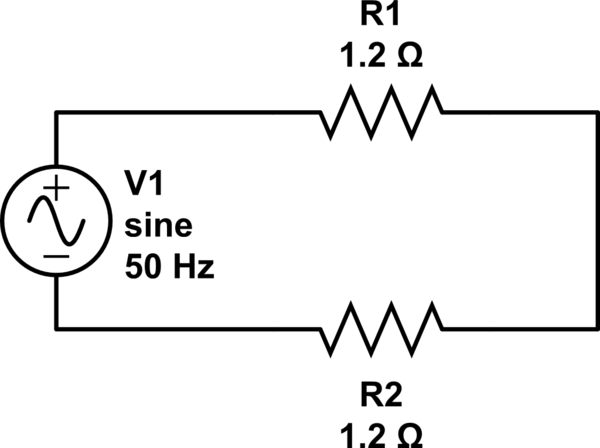 Both of these are much less than the 1400 W that the amplifier is rated for. What is the reason for the difference?

Edit: Some comments suggested that because I was not measuring the voltage right before clipping, I was not calculating maximum power correctly. This is true, but I did drive the amplifier once until it started to clip and remember the voltage not exceeding 15 V, about 50% more than the 9.7 V it reaches at the -20 dB point (can verify these numbers in a few hours). This is still only about 100 W of power.

Edit: The voltage clipped because I was looking at it on a NI-DAQ whose range is -10 V to +10 V. See my answer below.

I fed in a 50 Hz sinusoidal signal, and turned amplifier up until right before the -20 dB light came on.

What you've measured is the power output 'right before the -20dB light comes on'. What makes you think that light is correctly calibrated, and what level do you think it's supposed to represent.

There are several ways to define the maximum output power. The usual criterion is some measure of distortion, either visible waveform clipping on an oscilloscope, or a measured THD on a sound analyser. If you have neither of these, then a measurement of output voltage will give you some indication of when you've got to clipping. If you're measuring peak voltage (you've built a peak detector), then at clip the output voltage stops increasing as the input increases. If you're measuring mean rectified (cheap DMMs) or RMS (better quality DMMs), there will be an abrupt reduction in slope of output to input voltage gain at the onset of clip.

Another way is to do the same thing, but with bursts of tone rather than continuous power, which is said to represent musical dynamics better. This requires a suitable generator as well as an oscilloscope. It usually results in a larger measurement than for continuous power, and there is much debate over whether this is a 'fair' number.

Another way is what's the maximum power that can be generated for X time before the amplifier overheats. If the designer has done his job well, this is larger than the distortion limited maximum power.

The amplifier is rated to deliver 600W per channel into 8 ohms.

The resistors are 1% tolerance but your meter leads are probably 0.2 ohms. Maybe your wiring measured 0.4 ohms.

You need an oscilloscope to show clipping and TWO 2 ohm loads to measure the maximum output power. Turn off the clipping indicators that reduce the input levels.

I repeated the first experiment above but replaced the 1 ohm 100 W resistor with a 1 ohm 1 kW resistor. This would allow me to pass larger currents through the circuit without any of the resistors burning out. (One of the 100 W resistors did burn out during my experiments, which could have led to erroneous results.) The inductor was wound out of 16 gauge wire and so I assumed it would be able to handle large currents for up to a minute without overheating. I also had on hand a 0.1 ohm 200 W resistor which I put in series with the rest of the circuit to measure the current through the circuit. (My NI USB-6225 board has a range of -10 V to +10 V, and since the voltage drop across the 0.1 ohm resistor would be one tenth that across the 1 ohm resistor, I would be able to turn the gain up on the amplifier further before saturating my NI-DAQ.) I also turned the frequency up to 140 Hz so that the total impedance of the circuit was \$Z = \sqrt{(1.1 + 1 + 0.1).^2 + (2\pi(140)(0.003))^2}\ = 3.44\$ ohms, closer to the 4 ohms recommended to operate the audio amplifier in bridged mode. (In bridged mode, the amplifier is capable of supplying 2800 W of peak power.) My circuit is diagrammed below. 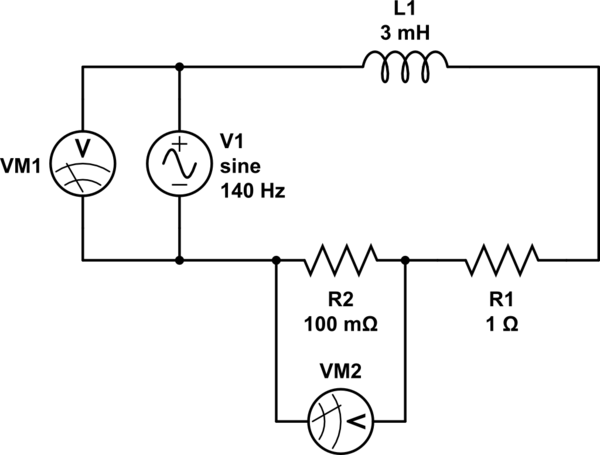 For reasons which I'm not sure, once the gain of the audio amplifier goes beyond a certain point, the NI-DAQ starts giving erroneous measurements, with unusual spikes and saturation that are not realistic. For that reason, I decided to switch to making measurements using a standalone digital oscilloscope. The oscilloscope was set up with a differential amplifier probe. As I turn up the gain on the audio amplifier, the amplitude reading on the oscilloscope linearly increases, for both VM1 and VM2. I reach close to clipping on the audio amplifier when VM1 on the oscilloscope reads about 115 V. Furthermore, at this point, VM2 is about 4 V. This gives a power of \$P = IV = \frac{4}{0.1}(115) = 4600\$ watts, which is much more than the 30-something watts I was getting before. Obviously, it's not safe to operate the amplifier at this power, but the experiment shows that the changes I made (namely obtaining a higher wattage resistor and measuring voltage with the oscilloscope instead of with the NI-DAQ) allowed me to draw more power out of the amplifier.

Not the answer you're looking for? Browse other questions tagged power amplifier audio power-electronics inductor or ask your own question.

0
Driving an RL circuit with an audio power amplifier