Can an auto-zero or chopper amplifier be used in a low-pass filter to remove a high frequency carrier? I am trying to design an active low-pass filter with a 1kHz cutoff and very low DC drift, offset, 1/f noise. The noise needs to be less than 20μVrms in 1kHz BW and -80dB attenuation is needed at 100kHz. I intend to use a Sallen-key 2nd order Butterworth with a single op-amp.

My concern is whether I need to worry about my 100kHz carrier (that I am trying to extinguish) beating against the chopping amplifier modulator to produce more low-frequency artifacts in my 1kHz pass-band, or that higher frequency intermodulation products could alias when I digitize. Would I be better off using a passive filter and dealing with any residual aliasing of the 100kHz carrier digitally?

My power supply will be ±5V and the output will drive a single ended ƩΔ ADC.

Can an auto-zero or chopper amplifier be used in a low-pass filter to remove a high frequency carrier?

Yes, if you really are using it as a low pass filter, the fact that its a chopper doesn't interfere with the signal unless but only if the auto zero/chopper has a unity gain bandwidth of greater than 100kHz (or whatever your frequency of interest is that might conflict with the chopping frequency ). The reason I say yes, is because most all chopper/auto zero amplifiers have a unity gain bandwidth in the Mhz range. The chopping frequency is higher than that of the unity gain crossover point.

The worst case scenario is the chopper/auto zero amplifier is chopping at 100kHz (or a harmonic). Because these amplifiers modulate and then demodulate signals, if the demodulation happens at the same frequency as the input bad things happen. Usually the chopping frequency is stated in the datasheet, or can be seen in the noise diagram of the amplifier.

I have had issues with this, I had an auto zero amplifier that was picking up RF in the range of 70-700Mhz and it was causing a shift (ever so small) in the amplifiers output. I put an RF low pass filter on the front end and the problem went away, later on analog devices released this part with the EMI filter built in: 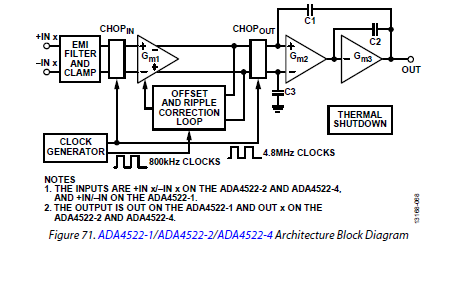 So if you are having problems with a chopper op amp, it may be useful to use a passive low pass filter followed by a buffer amplifier at unity gain (or thereabouts).

Would I be better off using a passive filter and dealing with any residual aliasing of the 100kHz carrier digitally?

There are two options, an active filter and making sure the any high frequencies that are to be filtered are within the bandwidth of the amplifier (and thus well away from the chopping frequency)

A chopper is basically a mixer that accepts the entire spectrum of the input above and/or below the chopper frequency including harmonics of the chopper rate to produce intermodulation products to produce an exact replica of the signal. A variation of this is the Sample & Hold (S&H) mixer which does the same intermodulation.

I would suggest a 3rd order 0.1dB to 1kHz or 2kHz with -120dB rejection @ 100kHZ (not -170) so that the chopper signal is well below your ADC resolution and you can provide 60 dB gain or as needed. But your phase distortion spec is unknown, so this can be easily tailored to suit the application. A passive RF filter is always a good idea as the output impedance rises with frequency. 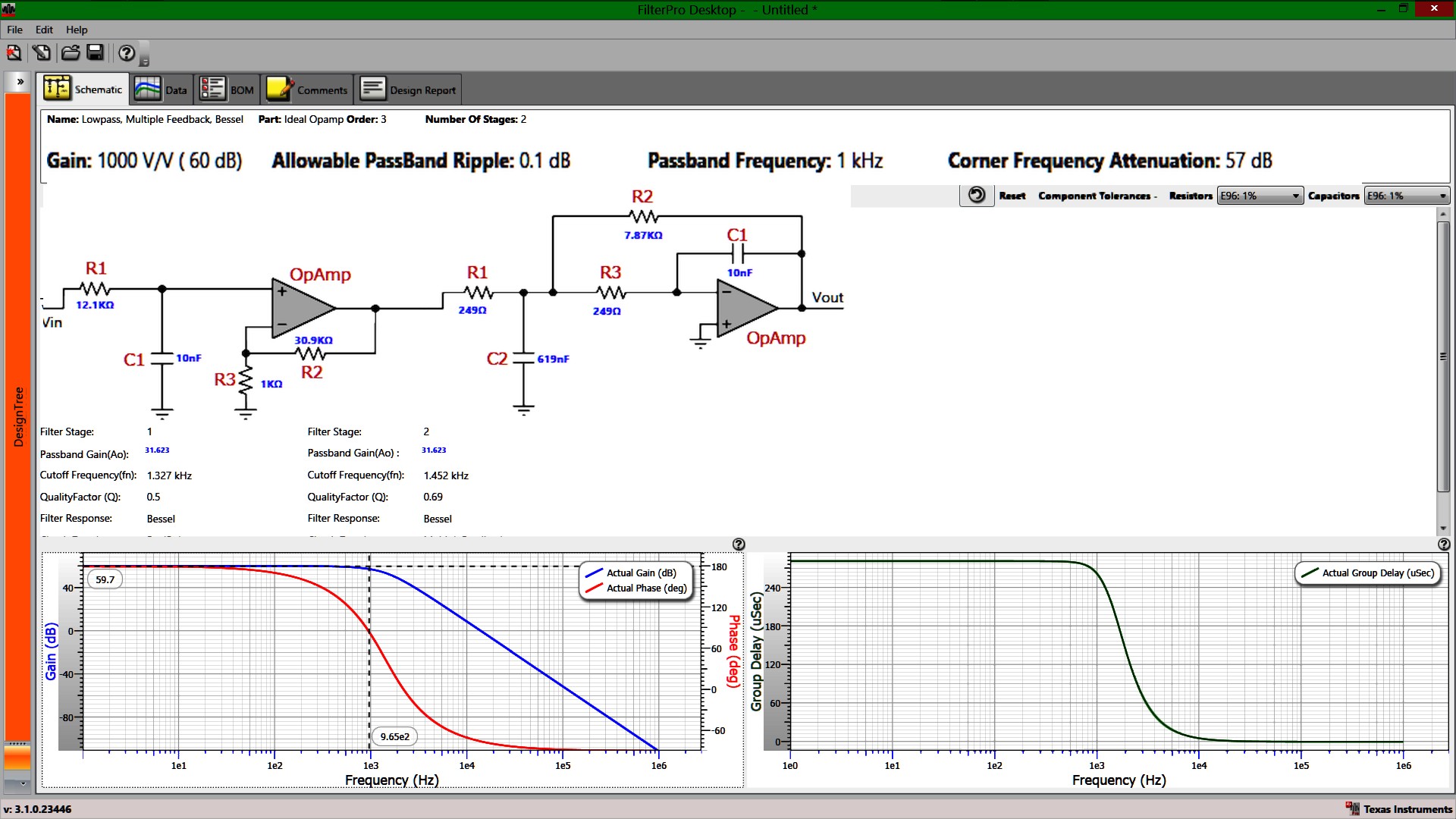 I recall in the late 70's, in Aerospace R&D, designing a S/H mixer in this way for the purpose of doing Doppler ranging measurements. I used a 10MHz OCXO and fast switches to create a 100kHz Sawtooth signal with the fall time of 10ns in a 10us cycle or 0.1% This had harmonics over 300MHz and was the signal I was sampling with a 10nS pulse created by the zero crossing of a 100kHz sine wave pilot tone from a similar 10MHz OCXO and a PLL to create my pilot tone that was broadcast from the rocket with all the other channels of FM data. All I needed was 1Hz of signal Bandwidth which I multiplied to 300MHz with a zero-cross-switch (ZCS) 1-shot. The result was up to 1Hz Doppler shift of the 100kHz pilot tone equivalent to x km per beat frequency cycle at speed of light while the rocket was going up to Mach 7.

Not the answer you're looking for? Browse other questions tagged operational-amplifier filter precision low-noise-amplifier or ask your own question.