I have a couple of questions related to the alignment procedure for the amplifier of Klipsch SW-12, a powered subwoofer.

Its service manual (link below) says the following:

The compression circuit consists of U5, U6, and Q28 and is adjusted via R30. If adjusted correctly, this circuit will limit the amplitude of the signal so the minimum amount of distortion in the form of clipping will occur at the output of the amplifier. R34 is used to set the maximum output level for the amplifier so it doesn’t underamplify or clip. Next, the signal goes through a buffer amplifier U2, which provides a gain of 4. Then the signal goes on to the driver circuits.

The alignment procedure (page 5) is the following:

Equipment required:
A signal source capable of supplying a 30Hz sine wave at 300mVrms.
A true RMS Voltmeter such as the Fluke 8060B.
A 16 ohm load rated for at least 200 Watts.
An oscilloscope (optional).

To totally align SW12 series 1 amplifiers, follow this procedure:
1. Disconnect power from the UUT (unit under test).
2. Connect the UUT (unit under test) to a 16 ohm load.
3. Connect a signal generator to the RCA input of the amp.
4. Set all controls on the UUT to their full clockwise position.
5. Set the signal generator for 30Hz and 60mVrms output.
(be sure and measure the output of the generator for 60mVrms.)
6. Connect the voltmeter leads to the output of the UUT.
7. Apply power to the UUT.
8. Adjust R34 for 33Vrms. Range is from 32.1 Vrms to 34 Vrms.
9. Change signal level to 1.5mVrms @ 30Hz .
10. Measure the output voltage. Should be between .94 Vrms and 1.06Vrms.
Adjust R30 if necessary.
* NOTE: Some interaction between adjustments is common. Recheck steps 8 and 10 for proper voltages.
11. Alignment of the UUT is now complete. Disconnect power and other connections from the UUT.

Accepted Tony EE rocketscientist's answer and built a 186.23-ohm resistor, consisting of 4 of the 16 750-ohm power resistors I had had since I started working on the subwoofer last year. Their not being exactly 750 ohms helped.

Their values and the combined (calculated) resistance: 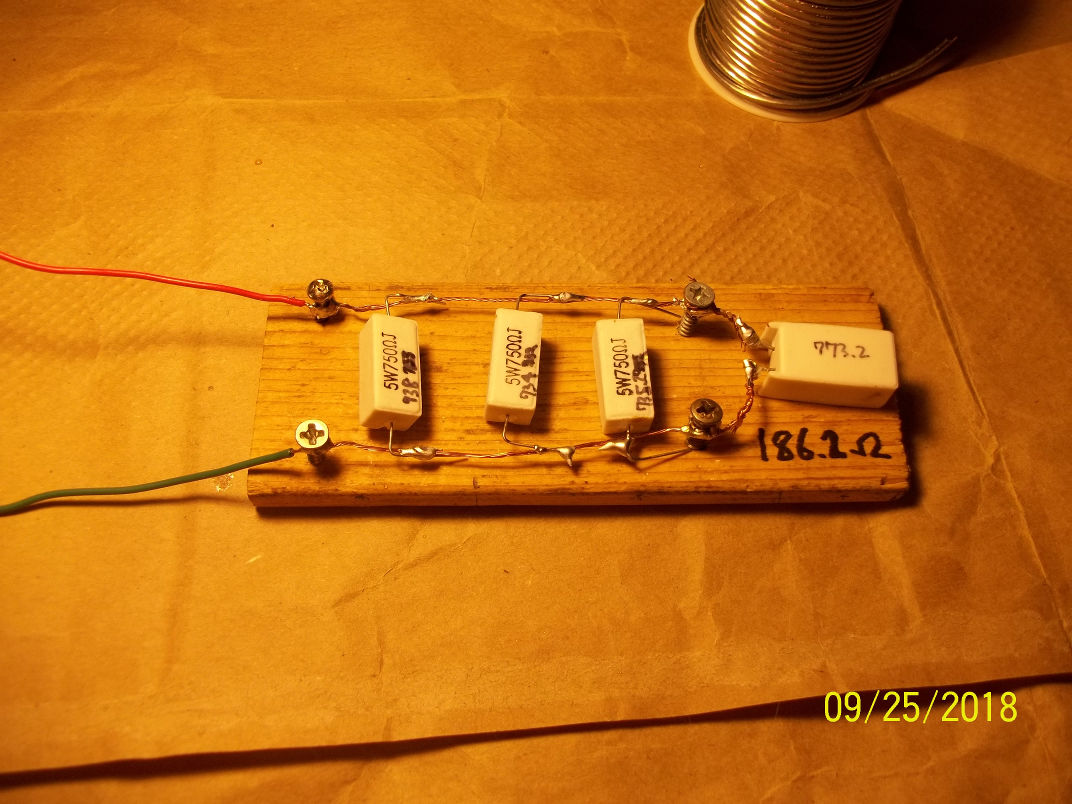 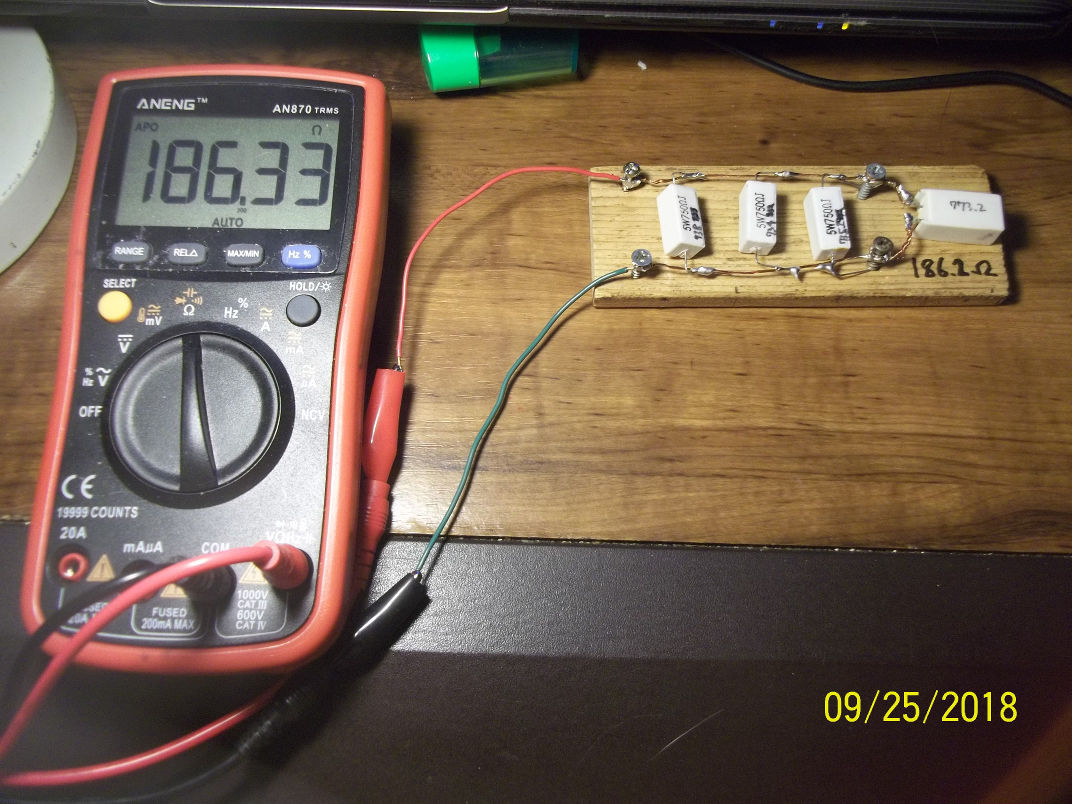 The space heater's resistance with/without the above resistor 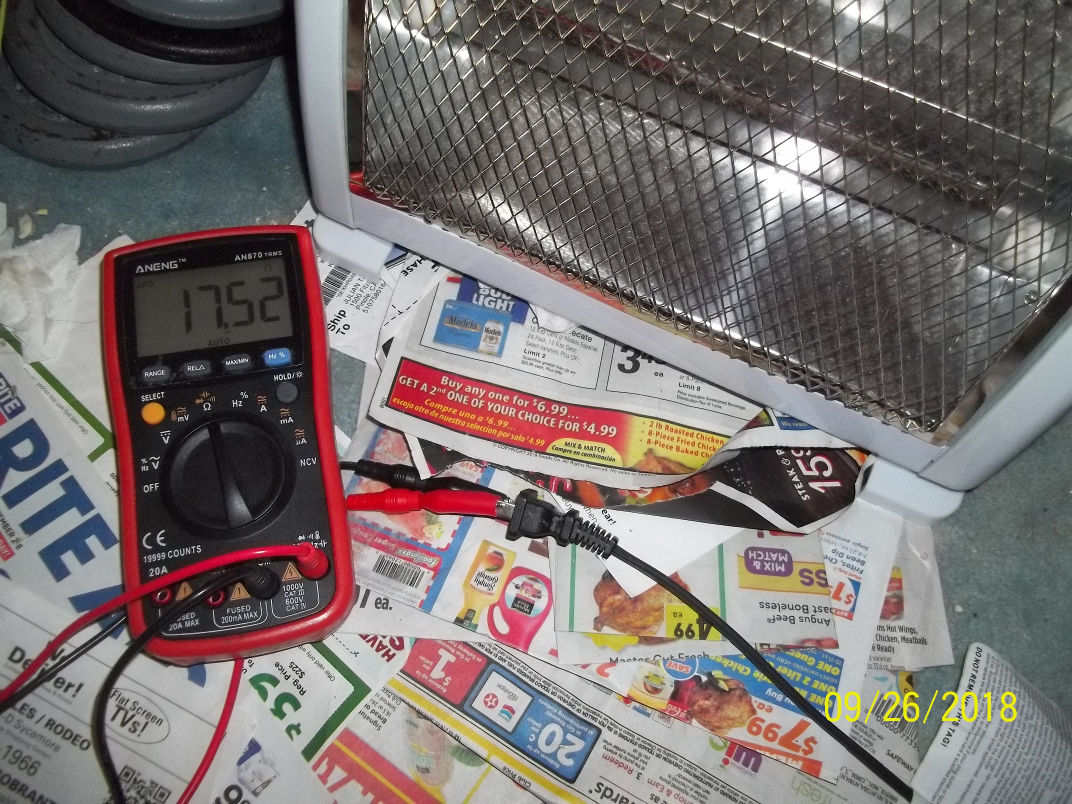 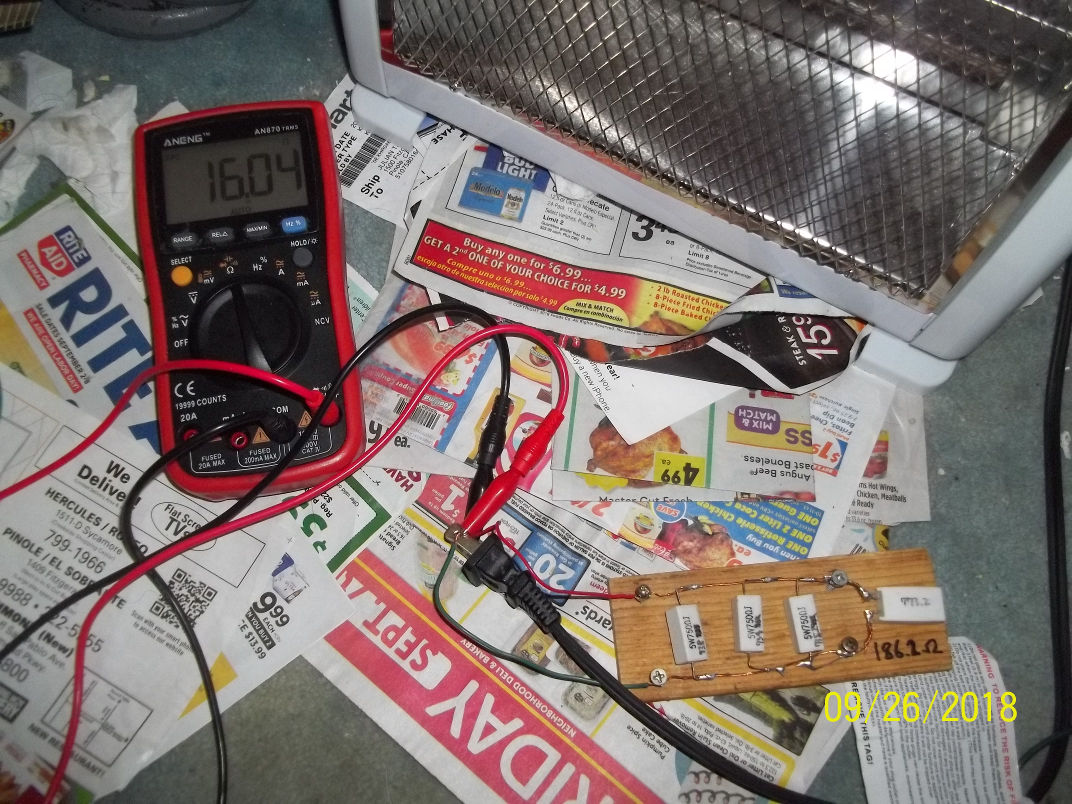 it could be a 220Ohm 10 Watt resistor if it is stable. An audio power Amp is just a voltage source near 0 Ohms ( 10mOhm ish)

Figure out what's easiest for you.

or one 20W resistor or whatever...

Not the answer you're looking for? Browse other questions tagged amplifier audio compression alignment or ask your own question.

3
Minimize noise on electromagnet using audio frequencies
1
Methods for a very low gain audio amplifier?
0
Audio amp testing: is this safe?
1
1.5 kΩ resistors vs. 750 Ω resistors
1
Setting the bias for the power amp section of an audio amplifier?
1
Car Subwoofer Amplifier Power Output
5
What class of audio amplifier is this unusual configuration?
0
Designing a Class A Audio Amplifier
4
Which is broken, the amp or the driver of this subwoofer?
0
How do I calculate expected output voltage of car audio amplifier with given conditions?