Is it possible to switch an electrical machine several times from motor to generator and vice-versa, within one revolution of its rotor?

I would like to find out how quickly and frequently a reversible electrical machine (EM) can be made to switch functions from a motor to generator and vice-versa - and what are the parameters of the EM that determine this.

There are two main timeconstants associated with an electrical machine

Well what do you class as rotating? Different disciplines may have a different requirement of the minimum definition of rotation... conceptually any arc movement is rotating and thus "how quickly" then is dominated by the electrical time constant and the ability to change the direction of the stator current

What about a +-10degree twitch? 359degree? With an ever larger arc being considered, the mechanical time constant become more and more important. If you define "rotation" as a 180degree movement then the load torque as well as the ability of the motor to generator torque will drive the time needed to switch between the two quadrants.

It depends on the motor characteristics.

Basically, the response time to current is T=L/R and the rotational time depends on the number of phases per revolution, RPM and moment of rotational inertia vs torque that affects acceleration.

So, in theory, it could respond within a rotation or may not swing much compared to full scale. It is not something you choose to do carelessly.

Shoot-thru is a fault condition when drivers are active in both directions at the same time. This is avoided with dead-time on the order of 1us. But for changing directions twice the max current can be created due to doubling the PP voltage swing and thus power limits may be exceeded.

So dual half bridges must have a dead-time for commutation in one direction and another dead-time for changing current flow directions dependent on VI product losses in the so-called Safe Operating Area SOA) limits.

It may be possible in theory, but in practice is like expect a large voltage change from a 1Henry inductor in 1 microsecond. with a negative pulse.

Loads can have 0 step rise time, but current will be L/R=T. The question ought to define the "dead time" and/or hysteresis between full bridge commutation forward and reverse in terms of phase at max RPM.

Motors have bearings that operate at some harmonic of RPM due to diameter ratios. Stimulating higher frequency step functions on current and thus torque generate harmonics of the step or a square wave of change in torque. Thus bearing resonance can be stimulated by harmonics or RPM and high frequency now of load within 1 cycle thus making bearings vulnerable to excess wear from the vibration.

Massive generating stations are power factor corrected to compensation for grid loads with for power factors instead of racks of plastic caps or oil filled tank caps for passive PFC. However modern Grid-tied Inverters produce pure sine waves now with active PFC inverters so the current generated is always sinusoidal in-phase with the voltage.

Recently there are papers to do this in motor generators. 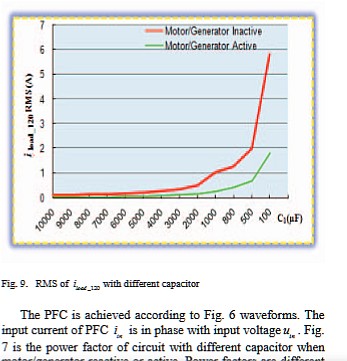 I would like to find out how quickly and frequently a reversible electrical machine (EM) can be made to switch functions from a motor to generator and vice-versa - and what are the parameters of the EM that determine this.

Figure 1. A simple peramanent magnet DC machine can be switched from one mode to the other as quickly as you can toggle the switch.

Not sure what you mean, but a rotating motor generates EMF anyway, to drive it electrically the driver overcomes it with higher voltage. If you want to instantly take energy from the motor- no problem, just stop diving it. Takes few microseconds at most. This is well implemented in hybrid cars.

Not the answer you're looking for? Browse other questions tagged motor generator transfer-function braking or ask your own question.