How to calculate Junction to Ambient temperature of LED?

I'm trying to calculate the Junction to Ambient temperature for this Cree LED:

I know how to calculate this:

However, If I want to know what is junction to ambient temperature (aka no heat sink), how do I calculate this from the data sheet?

This is a high power LED. It is designed to dissipate the vast majority of its heat through the solder joints. So you need to figure out the solderpad-to-ambient thermal resistance of the circuitboard onto which you intend to solder it. This can of course be calculated based on the dimensions of the copper features on your board, but the easiest method may actually be to just solder the LED to a board and measure the temperature at the solderjoint for a few different power levels.

Unlike other semiconductor devices such as transistors, attaching a heatsink to the device is not much use as it will block the light.

Page 12 of the datasheet states:

The maximum forward current is determined by the thermal resistance between the LED junction and ambient. It is crucial for the end product to be designed in a manner that minimizes the thermal resistance from the solder point to ambient in order to optimize lamp life and optical characteristics. [Emphasis mine.]

Figure 1. The thermal resistance figures are only quoted for junction to solder point. This implies that junction to air (through the lens) is not significant.

You should be able to design to meet the solder pad specifications at the end of the document and follow the rating curves give.

calculate the Junction to Ambient temperature

I assume this means calculating the junction temperature from ambient air.

I know how to calculate this:
Junction Temp = Junction to case + Case to Heat Sink + Heat sink to Ambient + Ambient

I don't think you do. That is a nonsensical formula. And it is unclear if you are referring to temperature or thermal resistance because your terms do not have proper labels. Case to junction what? Temperature? Thermal resistance?

To calculate Junction Temperature (Tj), you need to know how much thermal power (heat) is being generated and how much of this heat is being dissipated.

If I want to know what is junction to ambient temperature how do I calculate this from the data sheet?

There is no such thing as "junction to ambient temperature"

Very little of this information comes from the datasheet.

To calculate the number of watts to be dissipated you need to know the electrical watts being consumed and the radiant watts emitted from the LED.

The electrical watts comes from the IV curve. 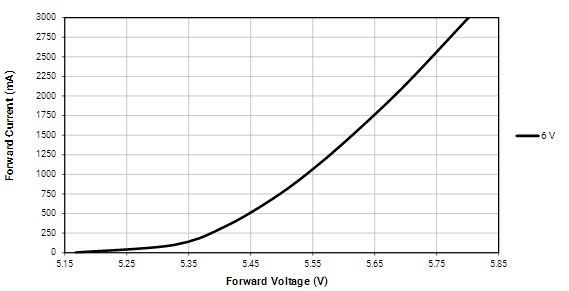 To calculate the radiant watts you need to convert the photometric (luminous) flux (lumens) to radiometric flux (radiant watts). To do that you need the spectral distribution.

The spectral distribution in the datasheet is in radiometric radiant watts.

If I were to digitized the blue curve to get the relative height of the curve at each wavelength then plot the wavelengths I would get something like this: 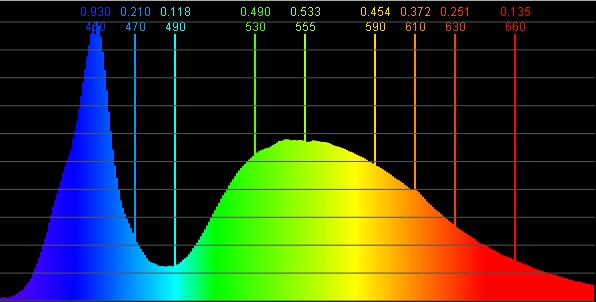 So now I have the radiant watts for each wavelength. I have to convert the watts to lumens. This is a two step process. Photons at each wavelength carry different amounts of radiant energy.

To "measure" lumens actually the radiant flux is measured then the radiant watts is converted to lumens according to the Photopic Luminous Efficacy from the Relative Sensitivity Curve for the C.I.E. Standard Observer table.

So you get the number of lumens from the datasheet

Then use the above conversion from lumens to watts 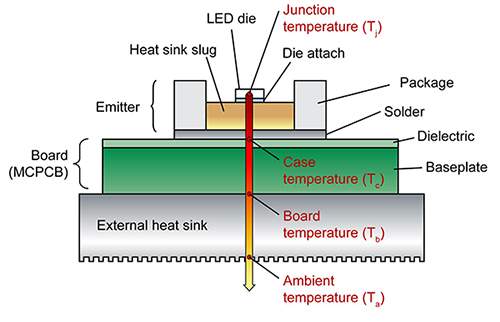 The next thermal resistance is the solder between the LED and PCB.

The image on the left is the copper in the PCB and the solder deposition pattern on the right. 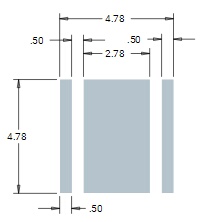 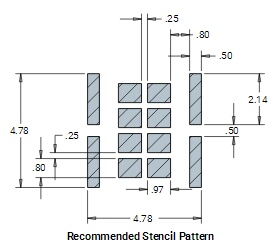 The thickness of the solder and the solder's thermal conductivity determines the thermal resistance. You can see by the stencil patter they go to great lengths to insure the solder is as thin as possible.

The rest of the thermal resistance come from the design of the PCB and heatsink.

For a semiconductor the formula for ambient to junction temperature is:

Power dissipation for a classical semiconductor is the same as the electrical power used:
voltage x current = watts (both thermal and electrical).

An LED dissipates the electrical power as both heat and radiant energy (light). To calculate the thermal watts you subtract the radiant watts from the electrical watts.

The best and easiest, IMHO, to understand source to make these calculations is:
Thermal Design By Insight, Not Hindsight
And "by easiest" I do not mean simple.

I found this document calculating an LED’s Junction Temperature to be of little use but it should backup some of the calculations used in my answer.

You can get yourself a masters degree in thermodynamics and do the calculations outlined above. If you are very bright you could take a short cut and take the MIT Open Course Ware class: Lecture 1: Thermodynamics Part 1

Or you can do it the practical way.

Design your PCB using the best practice thermal management methods, build your PCB turn it on and adjust the current based on the temperature of the PCB near the LED and desired brightness. I generally do not allow the PCB temperate to exceed 55°C. This is given that I only use LED with a max junction temperature of 150°C.

Not the answer you're looking for? Browse other questions tagged led heat heatsink thermal or ask your own question.