The latter part is what I need help with. I have no idea how to wire up the circuit so that it can check whether or not the guesses are correct. Any help is greatly appreciated as I'm still learning.

A 2k ROM uC might be able to perform these operations to interface and drive these displays with up to 4x12 input guess RGB LEDs and 4x12 bicolour LEDs for results giving 96 LEDs to interface using I2C driven LEDs.

I am not familiar with Mastermind but if I understand what you are doing this should do it. A simple EPROM state machine.

I believe my only assumption is there are no random events.

This is a Finite State Machine where the LEDs determines the current state. The push button switches determine the transition to the next state.

The data register is clocked at 10 hz so it will catch each quick press of the button and debounce is no problem. You may need a slower clock if you cannot release the switch quick enough. You can also remedy holding the switch closed by programming in the EPROM state table where the only way to leave as state is by pressing a different switch to transition from one state to another. In other words pressing the same switch twice would not transition to another state. 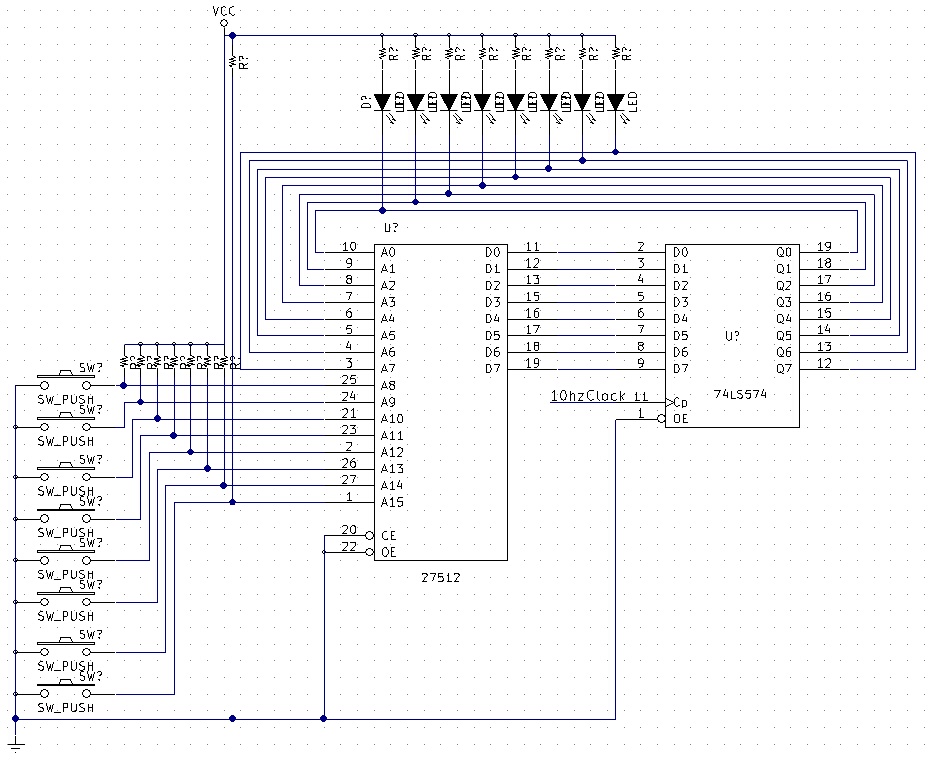 I'm not sure if you are familiar with this circuit, I think it is fairly common. If not, I don't think the concept is too difficult to grasp. I searched the term EPROM state machine and got this tutorial link: Finite State Machine Programmable Logic Controller

I have not made one since 1985, but I think this will do it. I remember 1985 because the final product was on a April 1986 cover of PC Week Magazine, as IBM's first Ethernet card for a PC when they released the Micro Channel PC.

Not the answer you're looking for? Browse other questions tagged led shift-register logisim or ask your own question.