I've been designing an amplifier, with ATF33143 as my HEMT in mind. Yet, I just found out the said HEMT went obsolete. So I started looking at SKY65050-372LF as a possible replacement.

On the DigiKey website, they have "Supplier Device Package" and "Package / Case" as separate criteria for transistors. I wasn't sure what the difference is between them. So I just directly went to their respective datasheets. SKY65050-372LF has 'SC-70' as its package, whereas ATF33143 has 'SOT-343 (4 lead SC-70)' as its package.

Does this mean they have the same or different package? (question 1)

Also, I think 'current-rating' and 'voltage-rated' are the maximum current and voltage allowed, and 'voltage-test' and 'current-test' are the respective values at which the transistors are tested.

I would have thought 'power-output' would just be 'current-rating' * 'voltage-rated' but those numbers don't agree with the 'power-output' values given below.

What is the meaning of 'power-output' on datasheets and how did they get the value? (question 2) 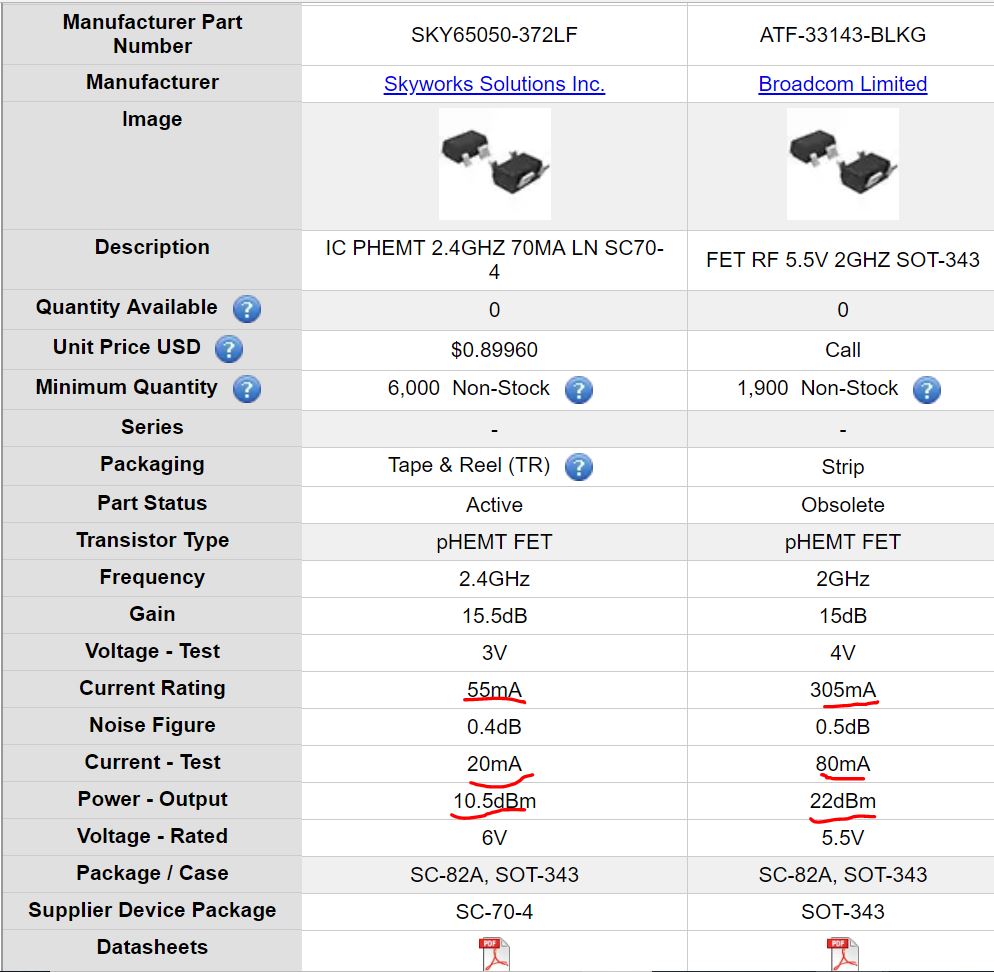 Component package designations are a situation where you have several different partly overlapping "standard" conventions, and then a bunch of manufacturers who have created their own schemes.

The "SC" designation is a JEDEC convention, the SOT designation is, I believe, IPC, and there are a handful of other pseudo-standards that have cropped up to cover various configurations that don't exactly match the standards. Many manufacturers have their own more tightly-standardized packages, with their own designations.

Even when two devices claim the exact same designation, the exact dimensions may differ slightly or have different tolerances, so it's important to always check the drawing in the datasheet to verify that the dimensions are close enough. If you've designed a PCB footprint for a device that is on the small side of the standard range, then you may wind up with insufficient fillets if you later switch to a device that is on the larger side. 0.65mm SOT parts are small enough that the tolerances DO matter here.

Regarding the part characteristics, don't rely on what Digikey has chosen to list in their catalog. It's very difficult to distill a device's performance down to a handful of numbers. The datasheet probably lists several different values for each of the parameters that Digikey has chosen to list, at different operating points. In order to compare a single parameter between parts--say, the output power--you need to ensure that those parameters were measured under equivalent conditions. Consider the catalog numbers to be a very rough guideline, and dig into the datasheet to make sure that the device's performance will meet your needs under the conditions in which you intend to use it.

Not the answer you're looking for? Browse other questions tagged datasheet packages fet ratings or ask your own question.

9
Why can't a power supply supply low current?
11
Voltage rating vs. power rating of a resistor
1
SOT-23 NMOS transistor power dissipation
7
What use is a Zener diode's leakage current spec?
0
Circuit design considerations using N-FET for a High Brightness UV-LED?
1
Is meaning of rated voltage not always same?
1
Whats the relation between AC power strip current rating and DC output current from the PSU connected on
0
Is rated current supposed to vary based on voltage?
0
What datasheet should I trust for TIP 35 and 36?
0
What do they mean by current specs in datasheet: peak or average value?