Below shows a bipolar transistor in fixed current bias configuration. A text says that this topology is independent of β: 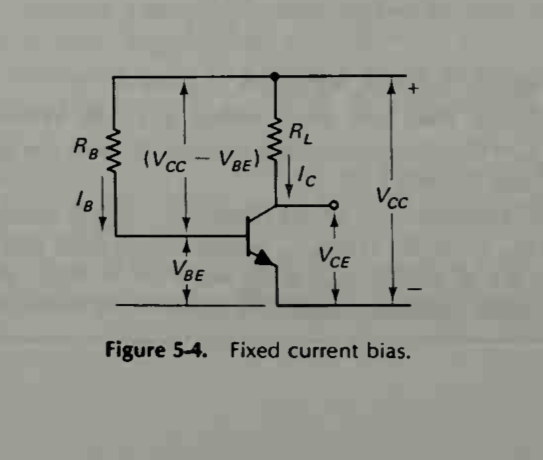 What I understand is, since Vcc, Vbe and Rb is constant the base current becomes fixed as:

As we see in the above formula since all three variables Vcc Vbe and Rb are constant, Ib is constant and so fixed.

My confusion is the following:

Imagine if we now change the transistor with the same type but with a different β, will the Ic change?

Thought 2: But if we think again after changing the same type transistor with different β which means Vbe will not change and so that means Ib is fixed at the same value as well. But now the new transistor has a different β and Ic = β × Ib. So this tells us that Ic will change.

Which thought above is correct and where am I making the logical flaw?

The Ebers-Moll equation does account for changes in \$\beta\$, but they use a parameter \$\alpha\$ where

We often say that \$V_{BE}\$ is fixed in this circuit because the changes in \$V_{BE}\$ are usually small compared to \$V_{CC}\$. It follows that \$I_B\$ is (essentially) fixed since it is determined by Ohm's Law and the voltage drop across RB.

Your understanding is correct then that if \$\beta\$ (or \$\alpha\$) changes then \$I_C\$ will change significantly, causing \$V_{CE}\$ to change proportionally.

Not the answer you're looking for? Browse other questions tagged transistors biasing bipolar or ask your own question.