Confusion with the gain concept of an amplifier

Before asking my question I want to briefly write about the basic meaning of the power gain.

Below is a model of an amplifier:

It shows the source input and amplifier output from left to right. In the middle there is the amplifier with the voltage gain A.

For simplicity above, both the source and amplifier output impedance is zero.

For the input and output power hence p1 and p2 we can write:

Now the power gain is defined using 10 based log:

which can be rewritten as:

So finally we can write it as:

Now the second part of the last power gain equation confuses me. It is because, according to that equation the gain is impedance dependent. Only if Z1 = Z2 we can omit it.

But when we have an amplifier such made with an opamp or a single transistor why we never talk about Z1 and Z2 when it comes to gain? We say "the gain of the amplifier is such". Imagine an amplifier made with an opamp using negative feedback, I cant see in the gain equation Z1 = Z2. I guess if this model were for an opamp Z1 would be the input impedance and Z2 would be the total load at the output.(?) But seems we do not take them into account when we derive the power gain.(?)

I hope I could express where I'm stuck at clearly.

But when we have an amplifier such made with an opamp or a single transistor why we never talk about Z1 and Z2 when it comes to gain?

It still needs to be taken into consideration, however in this diagram the sources do not have series impedance, they are infinite voltage sources (ideal).

In the real world however things are different:
Most often amplifiers are designed to have very low input bias current, and very high impedance. With op amps, it is usually uA's to fA's. With uA's you wouldn't need to worry about pulling the supply down unless the source impedance was more than 10KΩ's and most sources have source impedance's in the ohms or lower range (they can source 10mA or more).

I guess if this model were for an opamp Z1 would be the input impedance and Z2 would be the total load at the output.(?)

Z1 would be the input impedance (or for an op amp more commonly listed is the input bias current). This is an ideal amplifier, and it's output is an ideal voltage source. A real op amp also has source resistance/impedance. (it also does not have infinite gain) 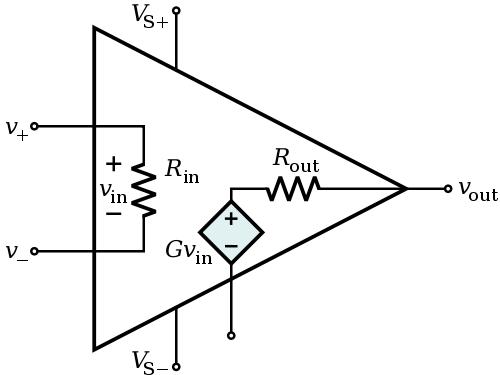 As far as the power gain goes for an op amp, it is limited by the op amps open loop gain \$ A_v\$ and the output impedance

Here is an example of a power gain for an op amp: 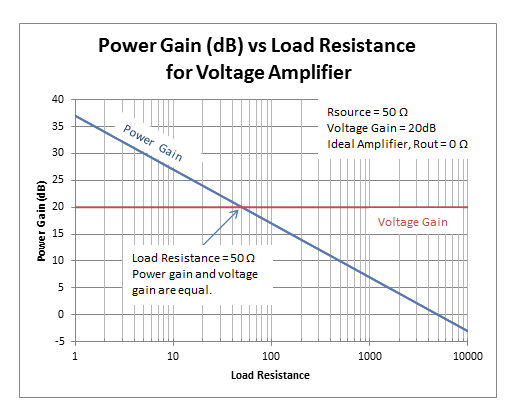 When talking about simple amplifiers the "gain" parameter is usually the voltage gain, not the power gain.

Not the answer you're looking for? Browse other questions tagged amplifier gain or ask your own question.

2
(Ideal) Amplifier networks/nullors - determining the gain
3
How to characterize SNR for an amplifier with extreme low input signal?
3
Inconsistency in the calculation of the gain of an emitter follower
1
Calculating gain of ICF amplifier
3
Transimpedance Amplifier Gain Analysis
2
Confused about the definition of voltage gain
0
Why is power gain a meaningful quantity at all?
0
What is the output of a cascaded amplifier?
0
Cut-off frequency of simple transistor circuit with capacitance between input and output