I'm learning custom library design in Altium Designer. I designed several libraries so far (BJTs, resistors, capacitors, etc), all worked without any problem. This time I tried to design an IC package (TL082 Opamp) which contains two distinct circuit elements in it.

The problem is, when I try to use this library in circuit (schematics), the two Opamps behave like a solid one-piece object. I can't move each Opamp separately. Their relative position to each other doesn't change. When I drag one, the other one comes with it. I want to use one of the Opamps in a place far away from its brother, but they just don't want to leave each other.

How do I separate these two Opamps from each other, so that I can use them independently in the schematic? 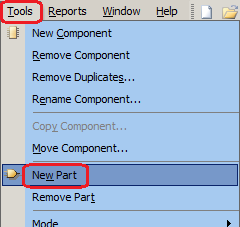 Now there are two different parts ("Part A" and "Part B") listed under your components name:

Each of them has a different design screen. Click on the one you want to design. Design the two parts separately.

3) Assign which pin belongs to which part: 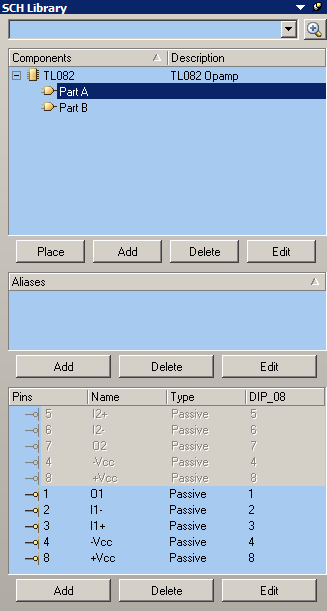 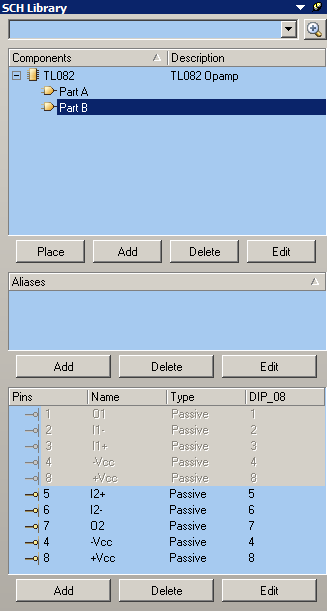 Notice that the pins 4 and 8 belong to both parts and always active. Pins 1, 2 and 3 are only active when Part A is selected. Pins 5, 6 and 7 are active only when Part B is selected. The pins of the non-selected part are always grayed out.

If the some of the pins do not match to their corresponding parts, alter the settings in the "Component Pin Editor" dialog box. 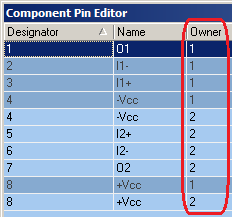 Change the pin order to state which pin belongs to which part.
1: Part A
2: Part B

That's all. Now we have two separate parts in one component library.

I haven't used Altium Designer, but have worked with its predecessor PCAD. So this is how PCAD did it, Altium will probably use something similar.

You'll have to define a multi-part component, and create a symbol for each part. Those parts can be similar, like opamp A and B, or 4 NAND gates for instance, but may also have mixed types, like when you decide to create a separate part for the power connections.

In the connections table you link the symbol's pin designators to the physical part's pins, and also indicate which parts may be swapped.

Not the answer you're looking for? Browse other questions tagged design schematics library altium or ask your own question.