I have designed a DC power supply which has a zener diode acting as the regulator. I've included the capacitor to filter it and to make some smoothing action and to lessen the ripple. Now, what would be the effect of adding more capacitors in a zener regulator? Also, in further designing it, is it worth maxing out the capacitor to some max value, like 10,000 uF?

EDIT: zener is 6V, input voltage would be a 220 V AC (I'll be using a 6V bridge transformer), load will be anything between 500Ω to 20kΩ. The load will vary, by replacing it in 500 ohm increments, meaning one at a time.

I can only use zener regulator, plus some caps and resistors.

A zener is a shunt regulator, which means that it is a load parallel to your actual load. 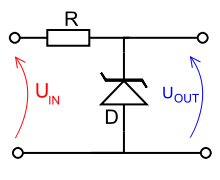 The zener voltage is 6 V, so you'll need a bit more to allow a voltage drop across the series resistor R. If the input voltage is constant, say 8 V, R will see a constant current if also the 6 V is constant. That's Ohm's Law: V = R \$\times\$ I.

The 10 mA for the zener is needed for proper regulation. If the current is too low variations may cause rather large voltage changes. As you can see at the maximum load aof 500 Ω the regulator is only about 50 % efficient; you have the same current through the zener as through you load. At the minimum load it's really bad: the zener will have taken the 12 mA from the load and have 22 mA total, while the load only has 300 µA. Efficiency is then only 1.3 %! That's a reason why zeners are not recommended for loads varying that much.

So the zener current will change with varying load, but also with varying input voltage, because if the 8 V would become 9 V then the total current would become (9 V - 6 V)/90 Ω = 33 mA. If the load takes 12 mA of that then there goes 21 mA through the zener.

Your zener will keep the voltage around 6 V, but with these changing currents you can't expect wonders: the 6 V won't be constant. A zener is not a good voltage regulator.

A better solution would be a TL431 (Russell! ;-)). This is already much more stable with much better regulation, and costs hardly more than a zener.

But the real solution is of course a series regulator. The 78L06 is a 6 V/ 100 mA part, which is easy to use: an input pin, an output, and a common ground. Add capacitors to both input and output and you're set.

edit after adding requirements to the question
If you can only use a zener you'll have to relax your requirements. 10 mV accuracy is absolutely impossible. That's less than 0.2 %, while the 1N5233 has a 5 % tolerance to start with, and the datasheet gives a zener impedance of 7 Ω maximum. That means that a 12 mA difference in zener current will give a 84 mV difference, that's another 1.4 %.

Apparently you are using the zener as a shunt regulator. That's not a good idea if it is just immediately following the transformer, rectifiers, and parallel capacitor. The reason is that you are pretty much guaranteeing that the output voltage will drop below the regulation limit for part of each cycle. During the peaks, the zener will limit the capacitor voltage to the regulation value. During the dips, it can only go down from there.

Your maximum load is only 12 mA, so you don't have to worry about efficiency. The simplest answer is to follow the rectifier and capacitor with a linear regulator. If the secondary of the transformer puts out 6 VAC as you imply, then its peak voltage will actually be 8.5 V. That minus two Schottky (at these low voltages Schottkys are a no-brainer) diode drops should leave about 7.5 to 8 volts. That leaves at least 1.5 V headroom for a linear regulator, which is quite doable.

As mentioned in the other answers, the zener is not a good voltage regulator for a widely varying load.
The way to improve regulation is to increase the zener current, but to reach a tolerance of anywhere near +-10mV (the accuracy is another matter given the zener tolerance and running at higher than average current) a large current will be needed.

The red trace is with a series R of 500Ω, the blue trace is 100Ω and the green trace 40Ω. The X axis is the load being swept from 500Ω to 20kΩ, the Y axis being the output voltage.
We can see the lower the series resistor, the better the regulation over the varying load. However, with the 8V input and the 40&Omega resistor, the zener will be passing ~80mA current and dissipating 4.7 * 80mA = ~380mW, so it will get very hot without some effort at heatsinking (the thermal resistance can be as high as 300°C/W according to the datasheet.
Also noticeable is the slightly different voltage "plateaus" with the different currents. The nominal voltage for this zener is 4.7V, but when we run the zener at ~6.5mA (500Ω) the voltage is lower at ~4.65V, and when run at ~80mA the voltage rises above this to ~4.77V. So this needs to be taken into account if you need the output to be accurate to (in your case) 6V. Also the temperature coefficient of ~0.018%/°C will affect things, so some way of keeping it reasonably constant would be needed for operation in varying conditions (obviously dissipation needs to be taken into account along with ambient)
A variation of 50°C will produce a change of 0.018 * 50 = 0.9%, which equates to ~42mV which will swamp your 10mV target. So everything has to be "just right" to have any chance of meeting it.

So if this is just for an assignment/fun/etc then do something like the above. If it's for use in a proper design, spend the few extra pennies and use a linear regulator (or at least a transistor pass element with zener to regulate the base)

Not the answer you're looking for? Browse other questions tagged power-supply capacitor zener or ask your own question.

2
How to avoid ±voltage on capacitors in astable multivibrator
4
Can I run a microcontroller on the power from a go-kart alternator?
8
Understanding CS5463's basic circuit power supply
1
10V DC Power Supply help
8
Why is the regulation of my 5 volt power supply so poor and how to address it?
3
Prevent excess current through Zener regulator when system load is switched off
2
Power Supply Design Help- failure at higher currents
0
Maintaining LM2596 output voltage with switch
1
How to estimate a linear power supply efficiency in LTspice?
1
For a Zener diode voltage regulator circuit: Why can't you place the resistor after the Zener diode?