I'm building a simple device with a microcontroller and I'd like to be able to turn it on and off using the "hold a pushbutton for 2 seconds" trick that is found on so many consumer devices nowadays (bluetooth headset, USB powerbank, smartphone.. come to mind). This feature seems to be called "soft power latching" but all the schematics I can find to implement it have drawbacks that make them impractical for such application, such as :

I thought such feature would easily be found implemented in a small IC for such applications, for example one with a pulled-up input for the push button, an external resistor/capacitor to configure the delay, and an open-drain output to control a pass-transistor or an EN pin. A Clear input pin to allow a software shutdown, a way to be able to use the pushbutton by the microcontroller as a user input, and a way to detect an imminent shutdown to perform a cleanup routine, would also be necessary in my case. However I fail to find such chip (granted I might not be using the right keywords). The closest I've found is the MAX16054 but it is a bit expensive for such feature and doesn't allow for the 2-second-hold delay (adding a capacitor beside the button seems a bit hacky because it would rely on the activation voltage of the IN pin).

I've therefore imagined a simpler/smaller/cheaper circuit that looks like it would match all the requirements but I'd like an external opinion on it, because it doesn't feel right that I can't find anything similar documented anywhere for such a useful and widespread feature :

My questions are therefore :

Edit : the circuit above will not work because the ESD diodes in the microcontroller will pull the lines low when the LDO is disabled (thanks @ElliotAlderson for pointing it out). Here is an updated version which should address the issue :

No, this circuit won't work. When the microcontroller is powered-down the ESD protection circuits in the pins will effectively pull your PIN0_OUT and PIN1_IN signals to ground through a diode. So, with your circuit there is no way to pull the PMOS gate high. You didn't link to the voltage regulator's data sheet but you also need to consider the leakage current at the enable pin.

If you want a useful answer you need to be much more specific about your needs. It sounds like cost is a factor...describe your requirements. What does a "negligible" amount of current mean to you? What does "too many components" mean to you?

why this kind of simple and useful IC doesn't exist and how is it implemented in consumer devices? (or alternatively, am I bad at searching?)

And you proceed to list an IC that fits the bill. The MAX16054.
Press debounced button to enable, hold button to have MCU issue CLEAR.

I've made this on a project using a single flip-flop from a 4093. 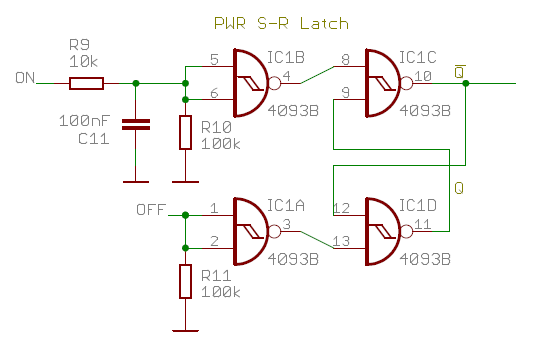 Which has as benefit being a very standard stock part, compared to any Maxim part.

You circuit should work, but there might be issues with the thresholds for the EN pin since the resistors are very high, compared to leakage of the mosfet and diode. This might need fine tuning.
You should test it.

I've implemented this circuit and it works perfectly on my devices :

When the button is pressed, the microcontroller is powered on. Its firmware is programmed so that it sleeps for about 2 seconds before doing anything. If the button is released during this time, the power is cut off and nothing happens. Otherwise, when the delay is reached, the microcontroller asserts the PW_EN line, forcing the gate of Q1 low to assert the EN pin of the regulator and keep the power on from now on. The button is decoupled from this by D4, so it can be used as an input for any purpose by the microcontroller on the BTN_PW line. The firmware is responsible for detecting a 2-second press on this button and when it does, it performs a clean power off by saving the current state to flash memory, disabling peripherals, and finally, setting PW_EN to low to cut the power off.

In the end, it checks all the requirements I had : configurable timings, no power consumed when OFF, ability to perform a clean power off, BOM reasonably small.

Not the answer you're looking for? Browse other questions tagged power latching or ask your own question.