How to identify, if possible, a battery [closed]

I have these two batteries, 18350 form factor, without any label. As far as I know they are rechargeable because I've salvaged them and put in my salvaged "li-ion to be cecked" box. Now I've completely forgot where I took them and they doesn't seem to be li-ion.

They were at 2.7V more or less, then not too low to be used if li-ion,but then I've tried to charge them with my li-ion charger at 0.1A and the charger blocked the charge because no current were delivered. I thought they were already fully charged (quite strange, since they were in this box since january) and in fact after 24h they show 2.85V.

There's a way to understand which kind of batteries are them? PS: I can charge/discharge under constant load/voltage and log the current/tension. (in a safe container, of course)

This could be due to a problem in your charger's constant current mode operation. May be you can try increasing the 0.1A current limit to a higher value like 500~800mA. Also monitor the voltage and current externally.

CR123 is 2/3 the size of an A size battery. (Type A batteries are obsolete). And a CR123 is a primary battery that cannot be recharged.

A rechargeable CR123 should be referred to as an RCR123.

Other Li-ion battery chemistries (e.g. LiCoO2 (ICR) or LiMn (IMR) chemistry) can be used without a diode as well. A 3.0V-3.2V LiFePO4 (IFR) Li-ion can be used becasue it is less vulnerable to over charging but is a horrible replacement.

Some RCR123 batteries do not have the protection circuit, and as a result, will not be compatible with many chargers. Li-ion chargers should use a protection circuit because LI-ion batteries have a tendency to start on fire and explode when misused. 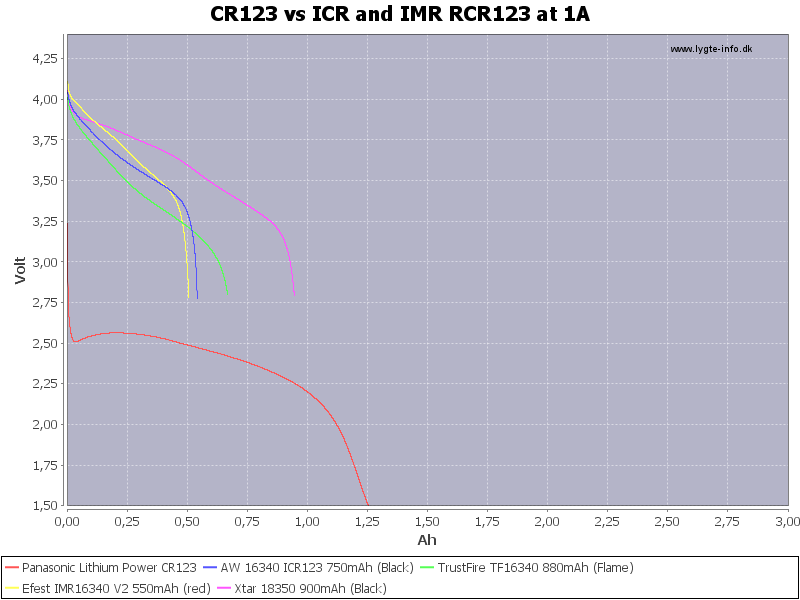 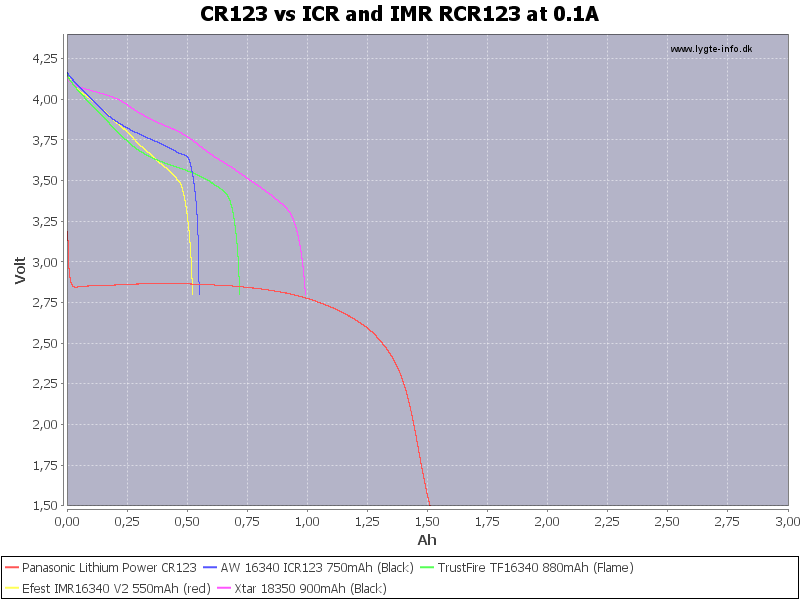 For starters, you should post a photo of your battery in question, to see what kind of tabs or other connector does it have. It might give some clues.

Second, you should try to refresh your memory and provide some idea of where these two cells came from, how old the equipment was (it might narrow the identification and exclude new commercial developments).

Generally if this is a CR123A non-rechargable cell and it has 2.7 V, it is nearly discharged. However, when attempted to "charge", it should consume full charging current and its voltage should creep up a bit. The charger should not disconnect. It also should be able to drive moderate loads (say, 100 Ohms) for measurable time.

If you report that your standard Li-Ion charger gives up (I would guess very shortly, in a fraction of a second), it is likely a dead Li-Ion cell which has all internals vastly deteriorated, has nearly zero capacity, and developed a very high ESR, such that the charger voltage immediately goes above 4.3 terminal voltage, and charger disconnects. To check if this variant is true, you should apply a moderate load (100 Ohm), and see for how long it will keep the 2.7 V level, if ever.

Again, if your cell doesn't charge and has no capacity, throw it away.

If it holds some charge and has 2.7 V, throw it away as well.

Not the answer you're looking for? Browse other questions tagged batteries battery-chemistry or ask your own question.

2
How can I tell if my battery is damaged physically?
2
Can I solder 4 AA batteries together in series and make my own rechargeable battery pack?
1
Testing batteries by measuring their short circuit current, why it doesn't work?
0
How can I determine the charge voltage on my HyperMac battery?
0
meddling with phone battery and charger
1
How to convert 5v from a usb battery pack to 2.4v~3v for use with a 2xAA powered photo camera?
1
Does any of those internet tips to recondition Li-ion batteries actually work?