I am working on a sensing device where the voltage of a floating node is dependent on the quantity to be sensed, as well as the net charge stored in the node. I would like the device to be only sensitive to the external physical quantity, and thereby reduce as much as possible the time-variation of charge on the floating node.

In a typical scenario with solid-state memory devices, you would have a MOSFET whose gate is insulated in all directions, and a control gate coupled capacitively to it (and possibly also charging it through tunneling). The floating gate potential induces a certain channel conductance which can be measured with additional circuitry around the MOSFET.

My problem is that the process I am using (TSMC 65nm) has very thin MOSFET gate dielectric, so there is a non-negligible leakage current (on the order of 100 pA) due to electron tunneling across the gate dielectric. The charge stored on the floating node would be on the order of pC so with such currents, the variation will be fairly large and this would provide very low retention.

Are there alternative known ways to measure a floating node potential while drawing as least current as possible from it? One possibility is of course to increase the dielectric thickness of the MOSFET (or its permittivity) but I am constrained with whatever values the process uses.

Maybe you can bootstrap the device so that the voltage across the gate is minimized. I don't recall the function relating current to voltage across a barrier, but I think it's at least exponential.

If this is for professional use, use an Electrometer such as this. 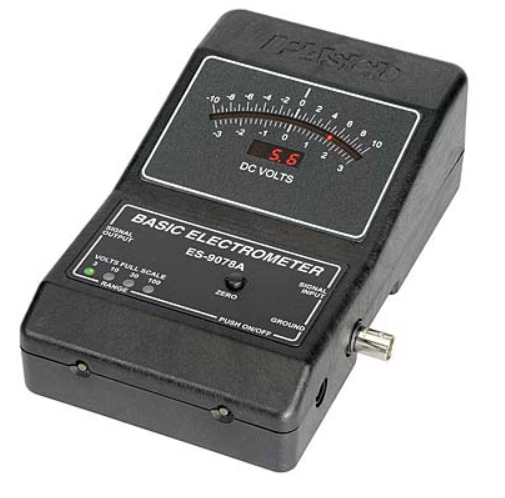 This type of meter has an input impedance of 10^14 which is adequate to measure voltage in the leakage environment you have.

There are a huge range of devices spanning low cost to high cost.

You could build an electrometer if you were willing, and here might give you a starting point using an LMC662.

If you are simply DIY experimenting then you can build/buy an electroscope. These are not easily calibrated, but can provide good comparative measurements of charge on a point. You could get something like this for $50 or less.

Not the answer you're looking for? Browse other questions tagged sensor integrated-circuit voltage-measurement charge floating or ask your own question.

6
How do floating gate transistors not leak the stored charge?
3
Why are the dimensions of a floating gate layer in a MOSFET so thick?
0
Using a DAQ with a programmable power supply floating input
0
multiplexer with floating outputs
0
Input leakage current
2
Measuring SuperCap current leakage avoiding voltages drops in ADC
3
Current source with grounded Load and floating power supply
2
Measuring small currents at DC high voltages without floating meter