What does 75A mean for this motorcycle battery?

I just bought this battery: 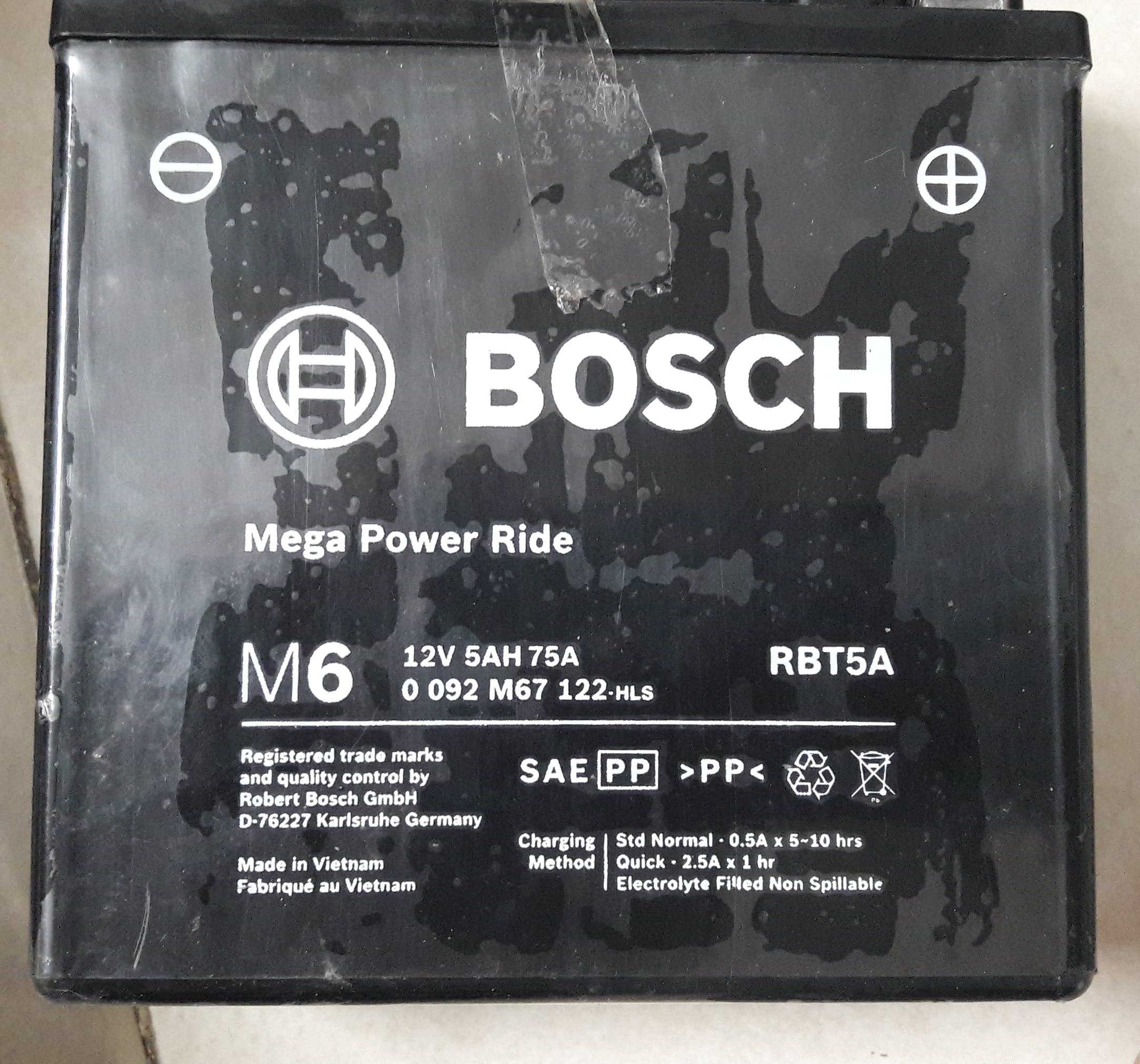 So what does the 75A mean? How do I get the same parameter "10hr" that appears in this question: Whats does "hr" mean among "V" and "Ah" in batteries?

The 75A is the rated current the starter may draw for a few seconds without damaging the battery.

There's no discharge rating printed on the battery. Bosch usually uses a 20hr rating for the capacity, it seems. At 10hrs, it's 90% of the printed capacity.

A battery of this size is classified as a power sports battery. CCA is not applicable to powersports batteries. A small single cylinder engine (≈120cc or less) uses a low torque starter motor that takes like 20 amp to turn over.

The Bosch M designation, in M6, is for Marine. Marine batteries have a dual role as starter and deep cycle. Bosch no longer sells an M6 battery but still sells an m4 and M5 as marine batteries.

Bosch only sells Li-ion powersports batteries and no longer sells a powersports SLA battery, except in third world countries and began marketing them in Indonesia in 2017. It was confirmed this is a rugged general purpose deep cycle battery. In this capacity it does not make sense to manufacture a deep cycle, marine, and powersport when one battery covers all markets.

Some retailers have standard tables for lead acid batteries which includes a row or column for CCA. They will use the deep cycle's max current as the CCA because technically the battery can supply 75 amp for 30 seconds, much longer actually.

I also confirmed that AH rating is no longer used for automotive batteries. Car batteries sold in the US only have CCA and Reserve Capacity (RC) is the number of minutes a fully charged battery at 80°F will discharge 25 amps until the battery drops below 10.5 volts. I also confirmed this by buying a Duracell Ultra (SLI-78M) truck battery. The only specs on it are CCA (800) and RC (115 minutes).

RC used to be rated in AH but was too confusing because the AH rating was specified between 5-20 AH. AH is no longer used in automotive batteries for RC. It is still used in powersports batteries. Powersports batteries are switching over to general purpose Li-ion rather than relabeling their deep cycle SLA.

While this battery is a powersports battery marketed in countries where the typical transportation is moped and motor bikes, it made no sense to design another box with a moped rather than a crotch rocket for a low end product.

It is marketed by Bosch as a powersports battery and sold by retailers as a motorcycle battery.

If the 75A were CCA that would mean it is a measurement of the number of amps a battery can deliver at 0°F for 30 seconds and not drop below 7.2 volts.

75A means this is the maximum discharge rate that will not damage the battery.

This battery is likely not a motorcycle starter battery but rather a deep cycle. This appears to be for a lightweight electric vehicle like a kids car. 5AH is not much capacity for a Sealed Lead Acid (SLA). The batteries used in a golf cart will typically have at least 100 Amp Hour capacity.

Because this battery is rated in AH, it is a deep cycle

My Harley Road King needs 400 CCA. If I tried starting my bike with this battery it would kill it because it would exceed the 75A max. Conversely if I connected my Harley battery to my solar power system it would die after about 10-12 deep discharge cycles.

5
If my battery charger says 160mA on the back, what does that mean to my 1800mAh batteries?
1
Will LiFePo4 work with ESC for LiPo?
22
Whats does “hr” mean among “V” and “Ah” in batteries?
1
What does the acronym LCA mean in relation to battery cranking amps?
3
Battery ratings; am I reading this correctly?
0
What does a AA battery marked with R6P mean?
2
why does higher current mean lower discharge capacity
0
What does this circuit on my battery do?