I have stumbled upon a soft power switch with low part count on EEVBlog, which I found very interesting for my hobbyist projects: https://www.youtube.com/watch?v=Foc9R0dC2iI

Since it uses a PMOS and I only had a NMOS to try the circuit out, I have mirrored the whole circuit: 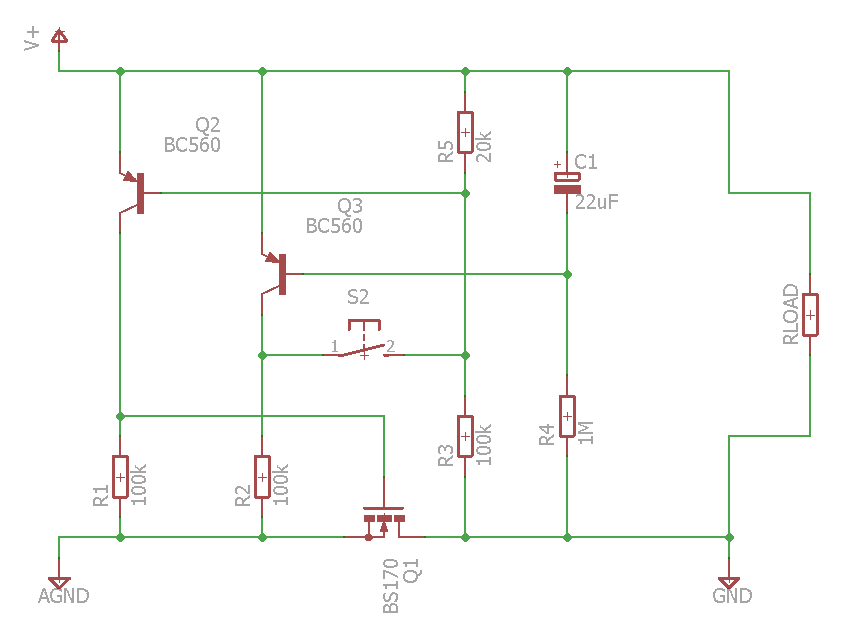 Initially there was no R5 but I found the circuit to be unstable (it sometimes switched to on without pushing the button), so I added R5.

The circuit works now, but the expected oscillation with continually pressed button is very "short-pulsed", i.e. it stays off pretty long (1 s) which is okay, but there is only a short on-time (0.1 s). Since keeping the button pressed is a possible usage scenario from the POV of the user, I would like to have a longer on-time. But this would require an overly big capacitor or an enormous R4.

Honestly I don't understand why it produces an asymmetrical wave form, because discharge of C1 goes over R4+R3+R5 (and RLOAD in parallel if it is there) which is only marginally larger than R4 for charging.

Is there a way to "symmetrize" this oscillator so that on- and off-time become the same?

PS: in response to your question, Jonk, some more information: ideally I would like to have a toggle-flipflop with as few parts as possible, and with zero power consumption in the off-state (aside from some leakage current of a mosfet). My impression was that the solution from EEVBlog was as close as it could get, but with the drawback of oscillating behavior instead of bistable.

When I tested it, I noticed that the duty cycle of the oscillation feels pretty much like a pathological user experience because it is like 10%. Suppose I miss the first on-period, then it turns off for a longer time and then turns on very briefly, so after I have missed it, it is practically impossible to turn it back on by just keeping the button pressed. Instead I will have to wait a certain period until the the capacitor has discharged again, until I try again to turn the thing on.

This is what I wanted to fix by "symmetrizing" the duty-cycle. If I already have to accept oscillating behavior with a short period, then at least it should allow to turn it on after missing the first period by just keeping the button pressed.

I think for stability and perhaps even simplicity's sake, I'd start out trying two capacitors. (I often use a MOSFET+BJT with one capacitor for a timed on-period, though, where the MOSFET+RC is vital to stay truer to the RC timing assumption.) One of them to ensure a consistent power-on state. 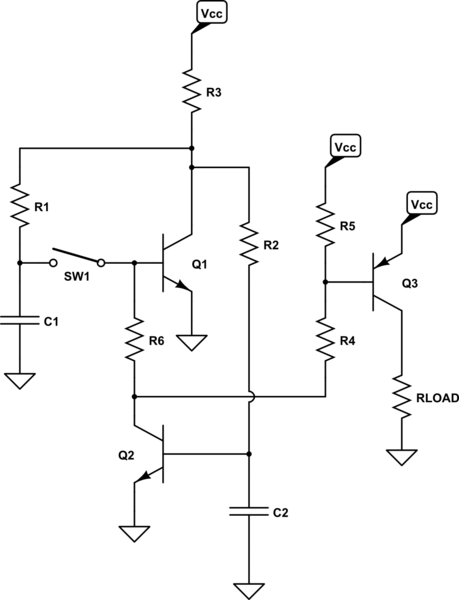 Yes, it's a high-side switch. But you can easily perform the change to make it a low-side switch, instead. (It was just easier for me to more rapidly write this out with the opposite polarity.)

With \$Q_2\$ OFF, on power-up, a properly designed circuit should also have the LOAD unpowered, by default, because now \$R_5\$ is free to pull up on \$Q_3\$'s base and keep it also OFF. I think this is the desired, expected behavior.

So in this ON state of \$Q_3\$ (and the LOAD powered), you want to make sure that the voltage drop across \$R_3\$ (when supplying base current for the saturated \$Q_2\$) leaves sufficient voltage so that \$C_1\$ will have a sufficiently high voltage on it as it charges from that node and via \$R_1\$.

At this point, \$C_1\$ is charged up above what's required to turn \$Q_1\$ ON when the momentary switch is re-connected, again. Doing so now causes \$Q_1\$ to turn ON and for its collector to be pulled down for a moment and therefore discharge \$C_2\$ and turn \$Q_2\$ OFF, returning the state of affairs back to where it was on power-up.

I didn't provide values for anything. That's because they depend upon your LOAD current requirements and a bunch of other details you haven't provided. But the general approach above can be adapted to most situations without much difficulty. It's just a step by step process. Your LOAD represents a certain current, requiring a certain base current and \$V_\text{BE}\$ voltage drop. This base current sets the collector current for \$Q_2\$ when it is ON. That itself requires a different base current for \$Q_2\$ to be supplied via divider \$R_2\$ and \$R_3\$. The divider node voltage must be above the required voltage needed to turn \$Q_1\$ ON, so that helps to establish their relative values. And there are other details for setting up all the resistor values. But they tend to fall out as you work through the design details.

Also, there is the possibility of the momentary switch bouncing. So you will also need to worry about debouncing the switch. There is a minimum pulse width needed to make the transition (set by your resistor and capacitor choices.) You can easily arrange this so that it ignores narrow switching pulses and requires a "long enough" hold in order to make the transition and toggle-action.

The same topology shown above can also be made to work with MOSFETs: 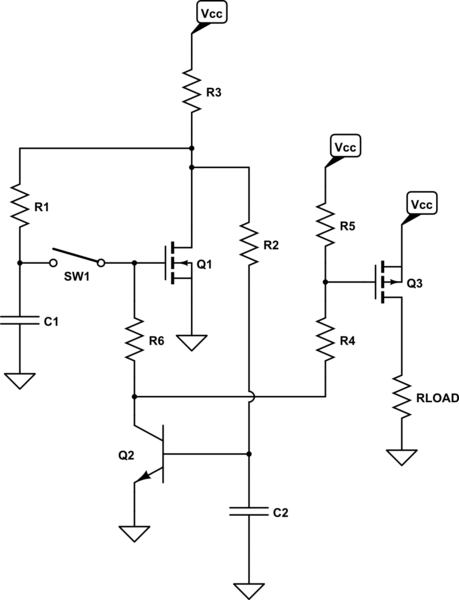 In the above case, \$R_3\$ can be made very much larger and this can greatly reduce the quiescent current (holding) for the OFF state of the switch. (The circuit still depends upon \$Q_1\$ being ON and \$Q_2\$ being OFF, when quiescent/OFF, so this means that your supply voltage will be across \$R_3\$ in this state.)

Circuit details such as parasitics and worsening saturation beta for \$Q_2\$ at very low collector currents will be the limitation. I would say that designing around about \$10\:\mu\text{A}\$ would be easily achievable without such considerations. And that less might be had, with some thought to them.

Currently C1 charges from 0 - Q3Vbe before Q3 turns on, but it only needs to discharge by 50-100mV to turn Q3 off. This makes the toggle very asymmetrical.

Replace Q3 with a P-chan FET to allow C1 to charge to a higher voltage. It now has an RC delay from 0 - VGS(th) and a discharge from V+ - VGS(th). If the VGS(th) is about half your supply you'll get close to 50% duty cycle.

Assuming you are toggling a 5V supply on/off then any FET with a VGS(th) around 2.5V would be fine ...perhaps something like a TP2104 might be suitable.

If you really want to assure a 50% duty cycle then you need a reliable toggle threshold point. easily done, but certainly more complex.

The problem basically goes into the direction of what Jack Creasey has noted. I found the solution only by simulating the circuit with LTSpice. Everything said below applies to my chosen operating voltage of 8 Volts.

What remains a little ugly is the base current spike through Q3, which causes some nonlinearity. I cured that by introducing a base resistor R8 of the order of magnitude of the charging resistor R4, i.e. R8 = 1MOhm.

PS: meanwhile I have done a very rough measurement of quiescent current (partial discharging of an electrolytic capacitor while battery is disconnected) which gave me <5 nA which is pretty decent in my opinion (also given that it's a breadboard build). Don't know how much of that is due to leakage inside the capacitor itself, so it's an upper bound. PS end

Pictures below show the LTSpice simulation. One can see that the current through C1 (red curve) is now symmetrical around 0 uA and as expected it has an amplitude of ~ 4 uA. Correspondingly the duty cycle of the output GND is ~50% (blue curve). The button is kept pushed at t=2s (green curve). 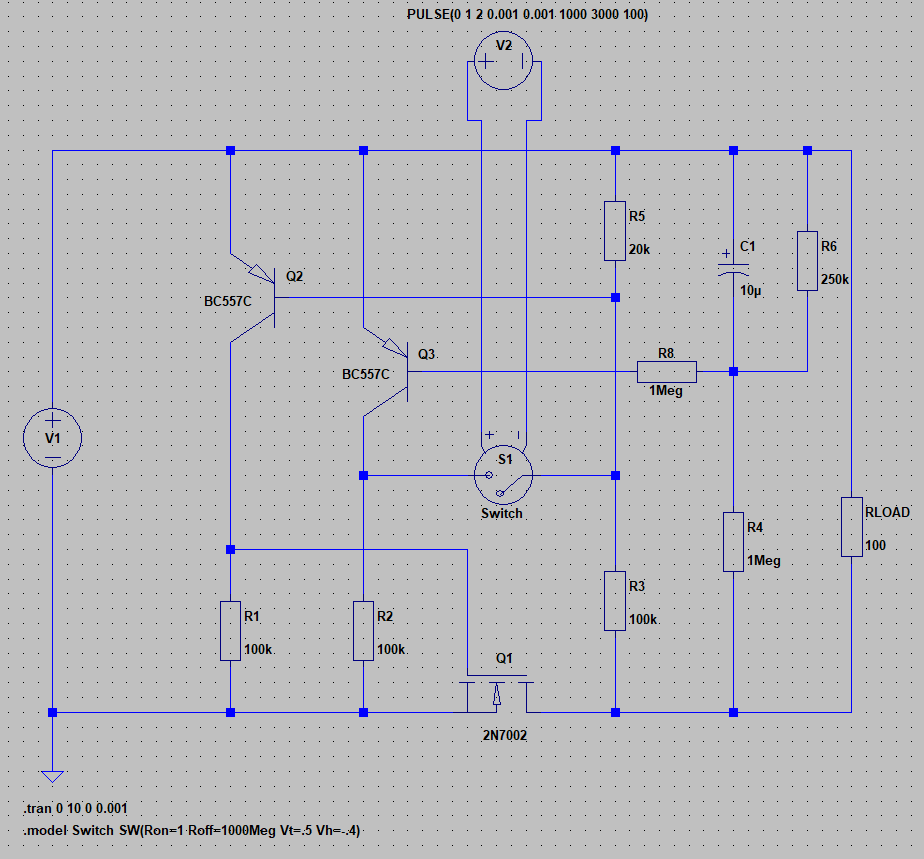 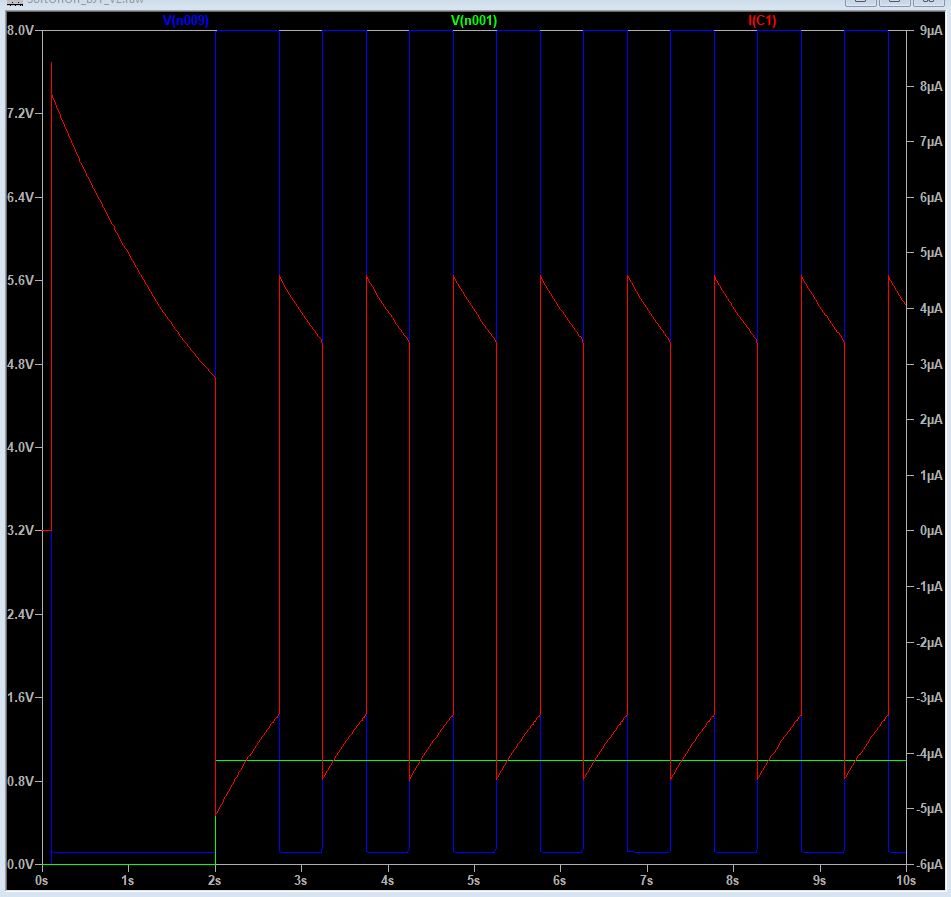 And finally - voila! - the normal use case, where the output ground potential GND is toggled by short button presses (instead of holding the button in the pushed state and turning GND on/off automatically, which is the "abusive" case). 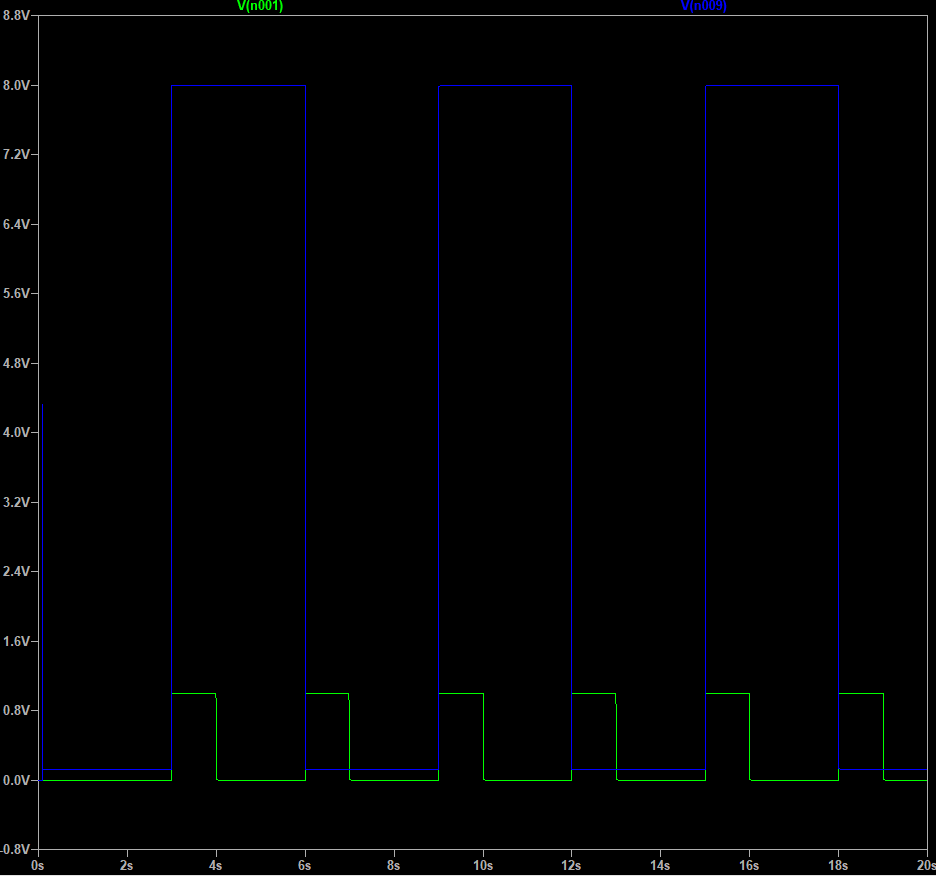 5
AVR Pin Dual Use: Input and Output at (seemingly) the same time
1
Latch power on-off circuit
0
Making a light switch timer?
0
MOSFET turn off time way too long, why?
0
Latching power circuit with short-to-ground switch
1
Transistor as a switch for normally closed operation from a Raspberry Pi GPIO
0
How to tune period for MOSFET IRF3205 with gate driver optocoupler PC817?
0
How to set the initial conditions of an astable multivibrator
1
Looking for a 3 button selector set of buttons that can be panel mounted