In what kind of circuit does current flow?

In what kind of circuits do current flow? For a circuit to be "closed" does the end point have to return to the start point like in the first image?

If you have a straight line conductor between two components of opposite charge like in the second image, will there be current flowing between them?

If it's true, will current then flow from one pole of a battery to the opposite pole of another battery(like the third picture) and why/why not? 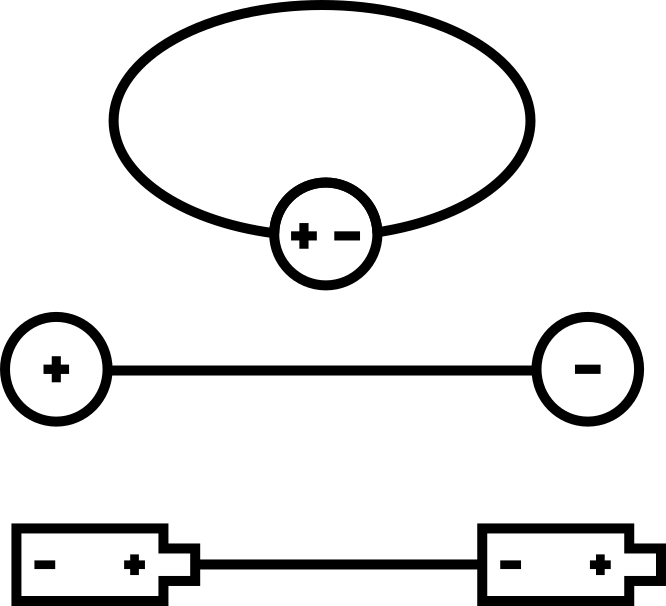 1) YES - The current will flow in the loop and it's value will be decided by the voltage of your power supply and the resistance of the path.

2)YES - The electrons will flow from negatively charged body to the positively charge body until both bodies are at same potential. Once that happens, no further electron flow will take place and hence no current will be flowing. This case is sometimes referred to as a transient current.

3) NO - Current won't flow because both batteries are uncharged objects. Also, net potential difference the bodies of those batteries is zero.

Yes current will flow. The magnitude of the current will be limited by the internal resistance of the battery and can be calculated by \$ I = \frac {V}{R} \$ (Ohn's law).

Yes, if you can charge up the two spheres with static electricity of opposite polarity then when connected a current will flow until the charges are balanced. Note that if there were more of one charge than the other that the excess would be split between the two spheres.

If the static voltage is high enough the equalising current will flow through the air when the gap is reduced enough to cause the air to breakdown.

Those pictures appear to show physically what's there. However, they miss other circuit elements that are important.

The second picture appears to show two separated objects, one carrying positive charge, one negative. For instance, one is the cat you've just stroked, the other is you. If they are conductive, and if you connect them with a wire, a current will flow briefly between them. Many times I've drawn a small spark (much to the cat's discomfort) off its nose, after stroking its fur, which has charged it with respect to me by the tribolectric effect.

What your picture doesn't show is the capacitance between the two bodies, which for cats and people is in the order of a few pFs to a few 10s of pFs. That completes the circuit. Given that typical charging voltages can be thousands, even tens of thousands of volts. That's a significant amount of charge, noticeable to fingers and cats.

Your third picture shows two batteries. What it doesn't show is the capacitance between all the electrodes which completes the circuit. When you make the connection between the batteries, this capacitance will charge up, and a tiny current will flow for a moment. However, as the voltages involved are just a few volts, the amount of charge that moves is so insignificant that you won't notice any effect.

Not the answer you're looking for? Browse other questions tagged current circuit-analysis short-circuit electricity or ask your own question.