Implementing a network of RF receiver/transmitters

I should make it clear tha I'm not an electronics buff, although I did do Electronics for my A-Levels (and got an A) I have 2 cats named Ollie and Tiggy. I don't want them going towards the road for obvious reasons. My house is surrounded mostly by fields, which is where they spend most of their time.

I currently am using a device called the Loc8tor. Unfortunately, it's range is not good enough, so I came up with a solution, involving many radio transmitter/receivers.

Our house is situated between 2 fields. There are many trees in the hedgerows. I would need to build several radio transmitter/receivers, which I can attach to the trees surrounding the fields (the higher, the better signal). Each transmitter/receiver will detect message signals from either cat's loc8tor tag or neighbouring nodes in range. It will need to have a range of at least 150m I think. Considering my loc8tor boasts this range (though it doesn't live up to it), it can surely be implemented.

I could use an Arduino attached to my android phone with an RF receiver. And using my programming skills I could program an app to detect incoming signals from the nodes, and based on number of signals, their locations and the signal strength, I can estimate their position on a map, and using my phone's gps, I can also see where I am relative to the cat's position. When I get close enough to the cat to receive their tag's signal on my phone, then I can act as a node, hopefully improving the accuracy of their estimated positions.

If the cat's are not detected by any of the receivers, then give me an alert on my phone via the app.

How would I do any of this? I HAVEN'T THE FOGGIEST! I have some experience in programming microcontrollers... but nothing very complex. It would require building a set of programmable receiver/transmitters, connected to replaceable power sources (with some luck though they should last a while, considering my cat's loc8tor tags last months on just 2 tiny 1.5V batteries), programming them so that they broadcast a signal with the cat's location and signal strength, which other nodes can pick up and re-broadcast, effectively acting as signal boosters, and then when the signal contains a message of my cat's whereabouts, using that data via the Arduino data input and my phone's GPS, display the presumed radius of the cat's possible location on an aerial map, along with my position.

Here is a diagram of what I would I would want to implement: 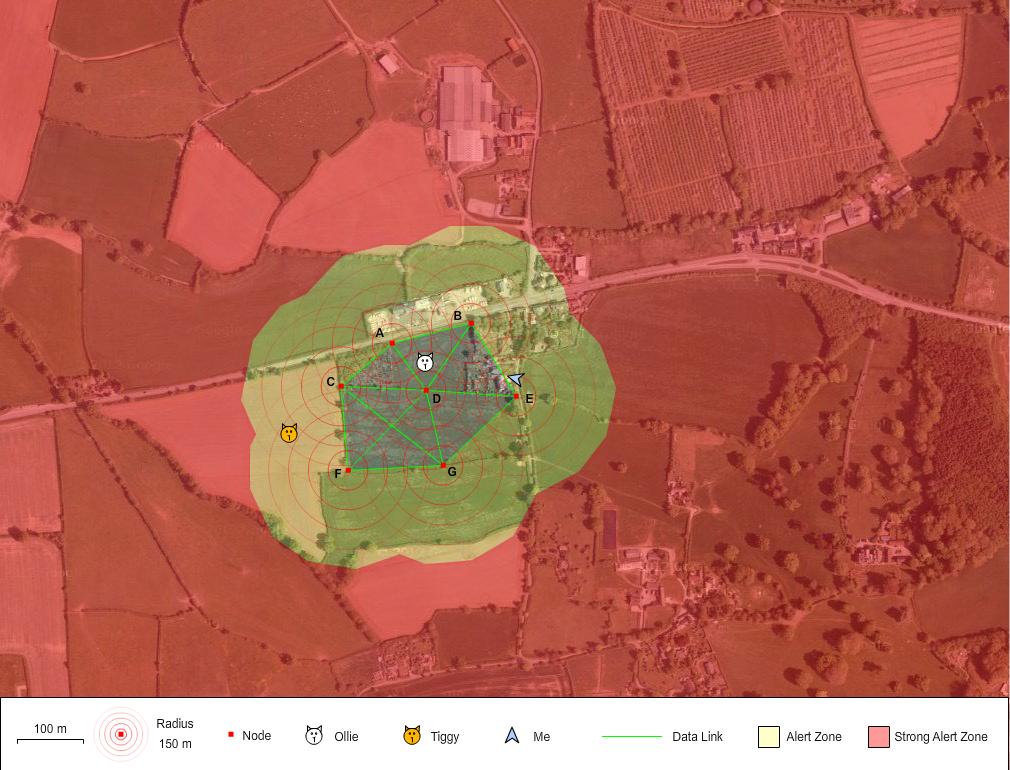 Could someone please tell me if this is a feasible idea, and if so, please tell me what components and tools I'd require, and finally how I would build one of these receiver/transmitters.

Here is some reading material for anyone who's interested in helping:

Other info: Loc8tor works at 2.4GHz

For now, let's make this simple: Lets suppose I want to make a tag for 1 of my cats consisting of a transmitter (and possibly a receiver too, to tell the transmitter when to start transmitting which would be much more efficient), and a receiver attached to an arduino attached to my phone, RF at 433MHz with a range of 300m. And consider that the cat's tag is operating off 2 LR44 1.5V batteries.

Can I make anything small enough that will send a dumb signal to my arduino-receiver-phone thing? The cat's transmitter only need to broadcast their ID, Ollie or Tiggy.

The receiver attached to my phone should pick up the signal when within 300m, and then it needs to very basically decode the signal for the ID and get the signal strength.

I understand that this won't be directional like the Loc8tor, but with atleast 3 nodes it will be quite accurate in telling me their position.

Anyway, for now, let's just imagine that this is all I want to do. 1 transmitter, 1 receiver. What would I need to build this, and how would I build this. Please be detailed.

I appreciate all the other suggestions and all of your help, but I really just want to know how I would do this exactly. It can be improved upon later. Thanks.

I haven't got an arduino and I haven't bought any components (apart from the PICs), because at this point that would be silly.

I've been looking around for tranceivers, and I would guess that the TRM-433-LT will do the job best. It's very small, efficient and apparently easy to operate. It boasts and incredible range, almost 1km. http://www.linxtechnologies.com/en/products/modules/lt-rf-transceiver

If that's no lie, I'd be interested in getting a GPS to work with it. That way, I only need 3 transceivers (2 for each cat, 1 for me), 2 GPS modules & 1 arduino. Relatively simple.

All I need is some more advice and a helpful hand to take me through the process of putting it together. I will be chuffed to bits if I can make something better than the Loc8tor :)

This is a harder problem than I think you realize. The basic Loc8tor system works primarily by virtue of a directional antenna in the receiver, and it doesn't really give you the position of the tag directly, it just indicates what direction it is from the location of the receiver, along with a very rough estimate of how far away it might be.

If you want to create a mesh of automatic receivers, each of these receivers will need to do direction finding, either mechanically by physically spinning its antenna in a circle, or by using multiple antennas and electrically "spinning" the reception pattern. Neither method is going to be simple to implement or particularly low-power.

It is only by combining direction information from two or more receivers (plus knowing exactly where these receivers themselves are located) will you be able to derive an absolute position for the tag.

So you need a device on them capable of:

Here are some ideas you can consider for each of the two problems (without your present Loc8tor tag system):

Options for relaying the position information/alert

3
2.4GHz Warmer/Colder game based on signal strength
5
Method required to enable a toy "vehicle" to follow a "target" wirelessly?
1
Using RF Link Transmitter/Receiver - ADC vs Microcontroller?
0
XY-MK-5V suddenly stops working
1
receiving transmissions transmitted on different channels sub-1 GHz using one receiver
50
Can a radio transmitter somehow detect the number of receivers in its area?
0
What exactly is the signal strength seen in API for BT/WiFi receivers?
1
GPS Receiver RSSI
0
FM receiver not picking up any stations