I am reverse engineering an RS-232 to RS-485 converter to understand how it works. I have attached the schematic that I reverse-engineered from the PCB (apologies for the hand-drawn schematic). I've checked it several times and quite certain that it is correct. The part that confuses me is the oscillator circled in red.

I recognize it as an oscillator based based around C2 & R8, and on my scope I can see it running at about 10kHz. I also see that the five parallel inverters on it's output are acting as some sort of buffer. However, what the heck is it there for?

This converter will work completely powered by RS-232 port, even if just the RX, TX, and ground lines (pins 2, 3, & 5 of the DE9) are connected. It does NOT require the +5~12V line to be connected to an external power supply.

So, any pointers on why that oscillator is there and how it achieves whatever it does would be appreciated!

Edit: thanks for the replies. I've done a bit more digging into RS-232. The idle state of the lines is negative, so connecting the converter will provide the negative rail, and as pointed out, the inverter circuit generates the positive rail from it. What through me off was the +5~12V supply pin on the board; It got me thinking that the positive rail was the one that was initially supplied, which of course is not correct. 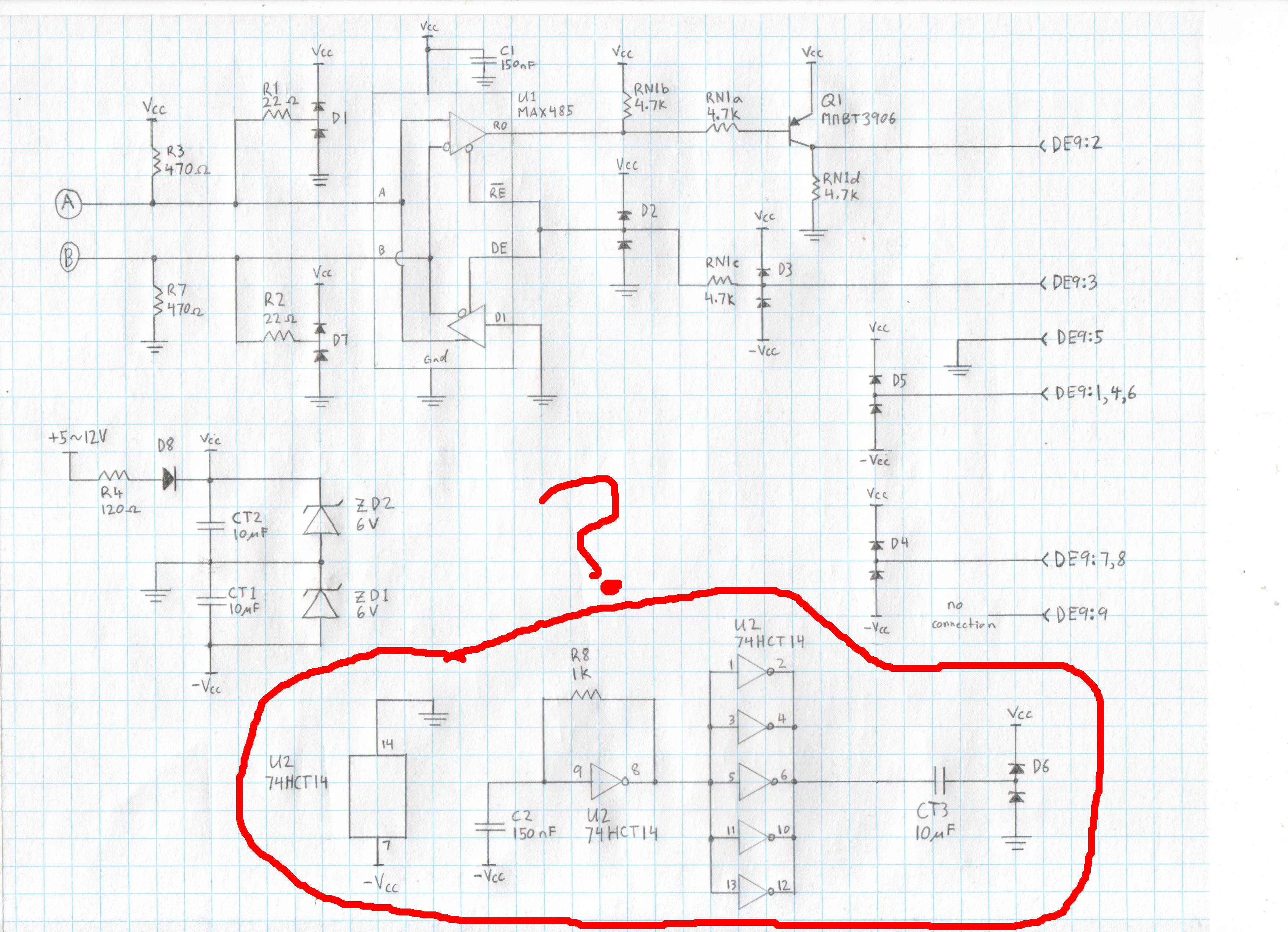 If the port happens to output (through a diode) +Vcc, it's used directly and the voltage minus Vcc is not absolutely needed, altough it helps the stability of the +Vcc voltage.

The design assumes that at least one of voltages -Vcc and +Vcc is available from the RS232 port. RS485 circuit needs only the positive one.

Since Tx on RS232 is idle at -V -5V ~ -15Vtyp and then clamped and rectified to -6V by zener. So -Vcc is always there with the 10kHz charge pump creating +Vcc. It might get weaker with continuous data. The charge pump uses 10uF series with 10uF load to the charge pump delivers 50%V- with the 5 buffers reducing the output Z to 10 Ohms or so thus 100us=RC. However the RS232 driver impedance is higher so -Vcc is slower to start first followed by +Vcc. D6 charges the series cap with negative pulses to Gnd thus raising the clock above ground and then charging +Vcc thru D6 to CT2.

I attempted to sketch the current path of the -Vcc startup current. +Vcc is similar above gnd. 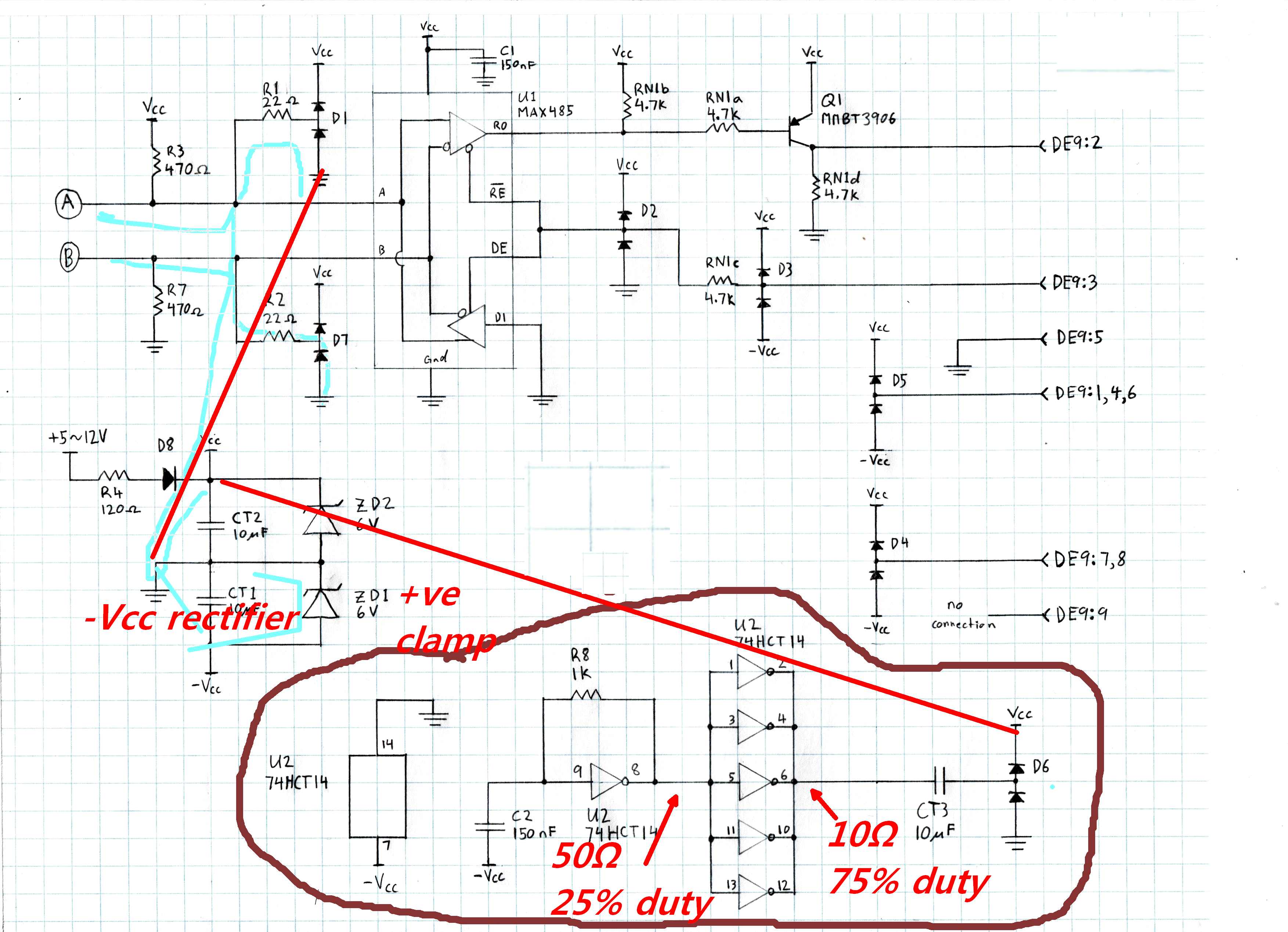 The other answer descriptions may seem correct, but the analysis of the schematic appears to be incorrect. 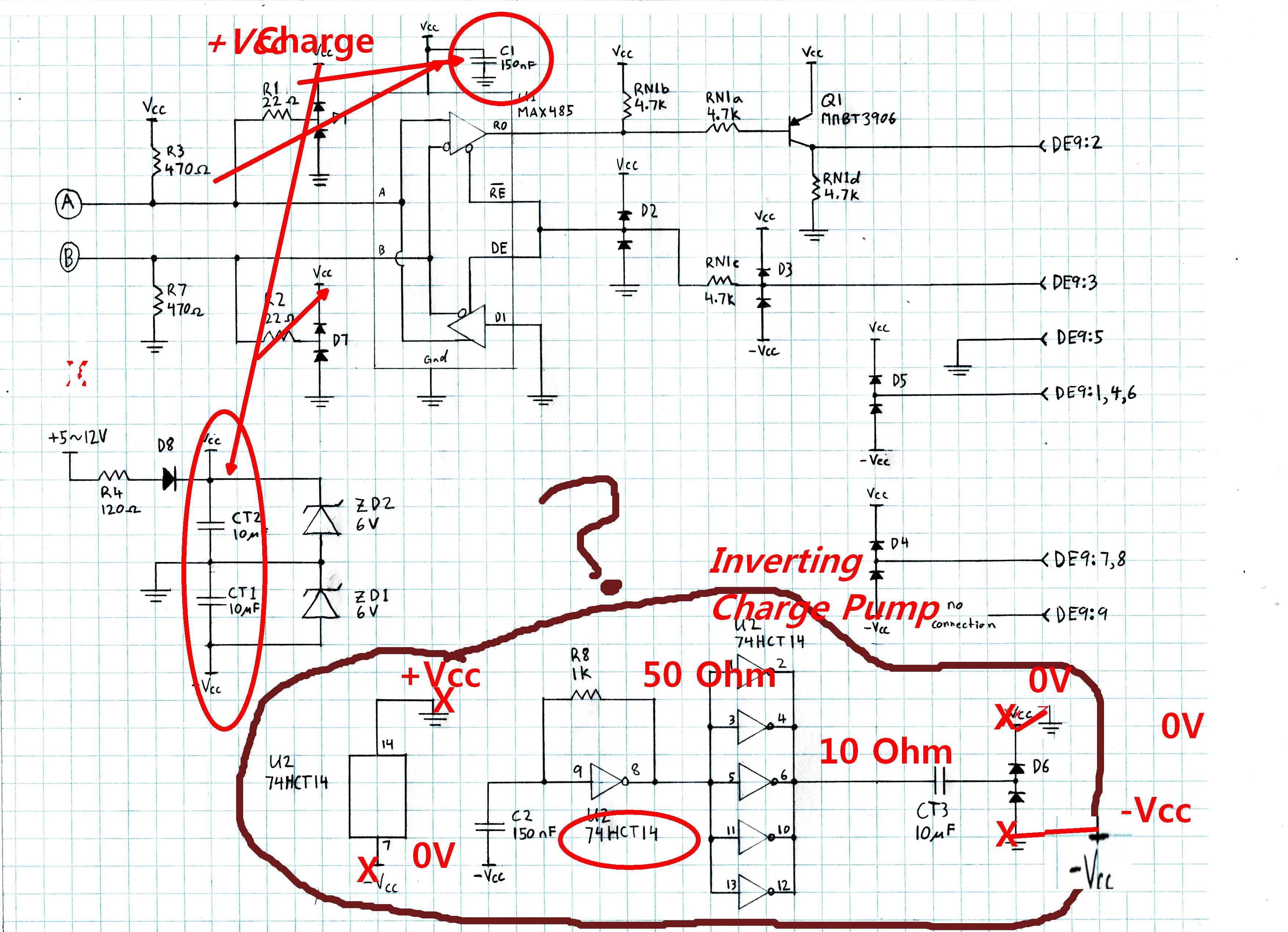 This is how I believe it must work.

Not the answer you're looking for? Browse other questions tagged converter rs232 rs485 or ask your own question.

3
Automatic RTS control for RS-232 to RS-485 converters
3
RS-232 and RS-485 software configurability?
1
How can I know whether a random “known not TTL” RS232 device will work with any old random USB-RS232 converter?
0
If RS-232 defines electrical characteristics, what is the transfer protocol?
0
Negative to Positive Voltage Converter
0
Will RS 485 to RS 232 converter change the half duplex mode to full duplex mode?
0
RS232 serial output: confusion with wiring
1
TTL to RS232 logic translation
0
What is 8 pin tssop packed component?232/485 ethernet converter
0
RS-232 to RS-485 transceiver