In his answer to Will repeatedly turning a light bulb on and off damage it? @Bradicul stated,

Can anyone think of a reason the PSU in these luminaires could draw 1.75 kVA for up to 300 ms when the lamp is only 9 W with a 0.9 power factor? Where is the juice going?

I don't see much contradiction. Inrush current is usually an exponentially decaying spike. The "7A" nameplate value is certainly the peak current. The "300ms" is likely a nameplate for spike duration, probably defined at 10% level, so the total energy is much lower than the bold estimation. Here are "definitions" from Murata: 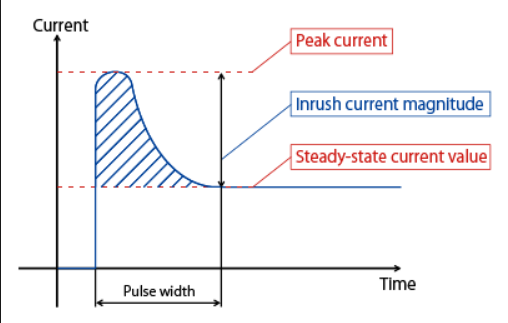 where the duration looks like is defined at 0% level :-)

There is a line-up of technology and tutorials that deals with inrush current measurement, like Keysight

Let me guess some numbers from the Philips datasheet.

It's certainly appears not to be a mistake in their datasheet to have inrush currents at 7A.
The website shows the same number for the light, and for many more lights the inrush current is even higher, for example this one at 18A.

The LED drivers have even greater inrush current specified. Here is a 10W driver with inrush at 35A ...though here they specify it is a maximum figure. The inrush current has almost nothing to do with the total power of the light, but is based on the size of the input capacitors used in an APFC design.

If you are concerned that the inrush current is going to impact your installation you could consider the following:

PS. This problem of high inrush current is not unique, here is an article about PC power supplies where the topic is raised, and an excellent paper here on APFC supplies that shows a partial schematic.

Not the answer you're looking for? Browse other questions tagged power-supply led lighting or ask your own question.

13
Will repeatedly turning a light bulb on and off damage it?