In the below schematic for the Tube Screamer guitar pedal input buffer, there is a 1k resistor (R1) after the coupling capacitor (C1). What is the purpose of this resistor? It has no effect on the DC biasing of the transistor, and only appears to degrade the signal. 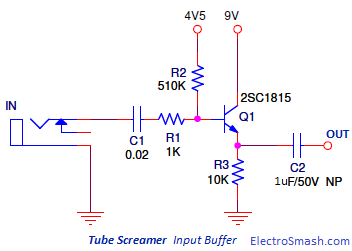 Its effect to the signal is negligible because there's hundreds of kOhms loading (R2 in parallel with the output circuit seen through the emitter follower). But it can very usefully limit some static discharging pulses which in some unfortunate cases could affect directly the transistor.

Imagine the guitar cable is already connected to the Screamer, but disconnected at the guitar end. The tip of the plug can touch anything. R1 can absorb a substantial part of available static charge.

All harmful unwanted input isn't static, often there's available 50...100% of the mains AC voltage coupled capacitively inside of equipment. It can come from your amp or some external device - no, matter does it come from the output or the input, closing the current path is the harmful thing when the signal wire makes the contact first.

One can laugh and tell that 230VAC mains voltage through 20nF capacitor could cause max 2mA AC peak current through the transistor. True, if it's 50Hz sinusoidal. But it isn't. It can be 320V step input when one connects the cable. Static discharges can be 10...100x higher step inputs. Without the limiting resistor in series a fast enough pulses could create high transient current before the capacitors get charged to the steady state. In addition it takes a little time before the suddenly started current spreads inside the semiconductor to the whole junction area. That makes local current density even higher which more easily causes irreversible changes.

Here is the schematic being discussed:

What is the purpose of this [R1] resistor? It has no effect on the DC biasing of the transistor, and only appears to degrade the signal.

R1 doesn't really do a lot. You are correct in that it has no effect on the DC bias point. However, it also doesn't "degrade" the signal much either.

I can only guess that the designer put it in there for some "protection". It smells like someone that wasn't all that confident with electronics following a rule of thumb or religious belief. I've heard people say things like "always put a resistor in series with the base".

There are a lot of silly religious convictions out there. There are also a lot of questionable circuits floating around on the web. Bring that into the neatherworld of audiophool mystique where physics doesn't apply, and you should be very suspect of any audio circuit you find on the web.

Let's see what this circuit actually does. Q1 is used as a emitter follower. The output impedance is 10 kΩ, so the expected impedance of the input signal must be considerably higher. 10 kΩ is a rather high value for running into a typical audio preamp, but maybe this circuit is intended to drive something specific that is known to deal with a 10 kΩ signal well enough.

HiFi audio is usually defined as the 20 Hz to 20 kHz frequency range. To roll off no higher than 20 Hz, C2 has to work against at least 8 kΩ. That fits with R3 well enough, but doesn't leave much room for any significant input impedance of whatever OUT is connected to. For example, if OUT is connected to a preamp input with 600 Ω input impedance, then the rolloff frequency is 280 Hz. That's probably not a desired result.

Now let's look at the input impedance of this circuit. It is R2 in parallel with the impedance looking into the base of Q1. Q1 reflects the impedance on its emitter times gain+1 to its base. Let's say (didn't look it up, reasonable value for a small signal transistor) the minimum guaranteed gain of Q1 in this application is 50. That means the impedance seen looking into the base of Q1 is 510 kΩ minimum. Good circuits work with BJT gains from their minimum to infinite. The base impedance of Q1 is therefore from 510 kΩ to infinite. That in parallel with R2 means the impedance with R2 is from 255 kΩ to 510 kΩ. Note that this is with the output unloaded. You can see that the additional impedance of R1 is hardly relevant. We could say it is 256 kΩ to 511 kΩ, but the difference between that and the previous value is well into false precision.

Let's check on the high pass filter rolloff frequency caused by C1. With a minimum of 256 kΩ to work against, it is 31 Hz. Perhaps that is good enough for this particular application, but for "HiFi" you would want it to be lower. There is very little reason C1 couldn't be made a bit larger.

So overall, this is not a great circuit, and it comes with usage limitations that you didn't mention, and are probably not spelled out anywhere. There are better ways to buffer a high impedance signal that are only slightly more complex.

Whether R1 exists at all is a rather minor issue compared to the others.

Given the input plug's center-pin is not grounded, the ESD risk must be handled. A discrete (non-silicon-substrate) resistor is the right approach.

Not the answer you're looking for? Browse other questions tagged transistors amplifier analog guitar-pedal or ask your own question.

3
Why does this circuit use a transistor buffer even though there is an high input impedance op amp afterwards?
2
Guitar signal input to Arduino UNO ADC - alternative part for TL972 op-amp
5
Reasons for choosing a transistor instead of an op-amp as a buffer
0
Ticking noise from guitar pedal attempt
1
MXR Distortion + guitar pedal schematic - meaning of +4.5V
0
Guitar effect dry through circuit / wet dry mix?
1
Purpose of 100 ohm resistor on guitar pedal output buffer
16
Why NPN and PNP in parallel in this distortion pedal circuit?
5
Overdrive guitar pedal sounds better without a clipping diode