My amplifier produced a negative gain when it should be positive. Why?

After we plotted the results, the graph of input voltage vs output voltage looked as expected with lower saturation limits, then a linear increase in voltage and high saturation limits. Our results showed an amplification factor (the slope of the linear region) of less than 1, which caused the gain of the amplifier to be negative. My TA said the setup looked fine and could not explain any reasons why we got a negative gain.

Does anyone have any reason as to why the amplifier would produce a negative gain, thus defeating the purpose of the amplifier? 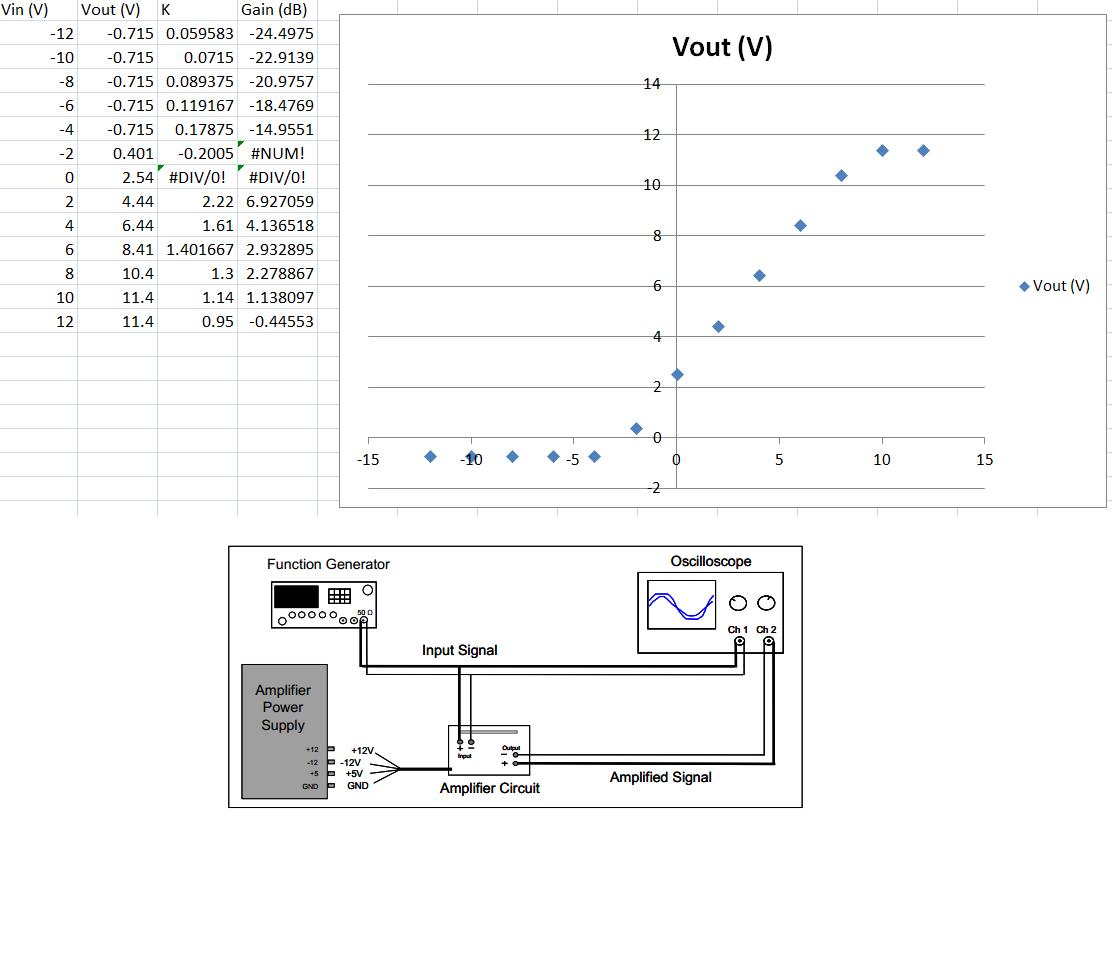 The term "negative gain" is reserved for those cases where the line has a downward slope and so reverses the polarity of the signal (a 180° phase change). A op-amp in an inverting configuration is a prime example.

What you have is an attenuating amplifier; the signal out has a somewhat decreased amplitude from the signal coming in but not a different sign. (I'm ignoring the offset of the sloped line in order to keep it simple)

The relation of the voltage-over-voltage gain (V/V) to dB gain often confuses people since the dB measurement actually strips out the "inverting" property of negative-gain amplifiers (since you take the log of the absolute value of the gain). Let's set up fours scenarios for different line slopes (V/V gain):

The Wikipedia page on Gain might explain it better then I can.

The purpose of an amplifier isn't always to increase the voltage amplitude of a signal being passed through. It might for example be used to drive a current-hungry device when the source signal/device can't, like loudspeaker power amplifiers do.

What you are saying is contradicting itself. You say the graph shows a gain a little less than 1, but suddenly you are saying the gain is negative (less than 0). The gain in the linear region does seem to be right around 1 according to the graph. I can't begin to guess how you got a negative gain out of that, especially since you apparently read the graph correctly.

At first approximation, the gain is 1.0. If you use the numbers from the table from input 0 to 6 V, the gain is 0.98. That is certainly not negative.

After reading some of your comments, I think you are confused by how you are expressing gain. Gain is simply the ratio of a output response size divided by the input size to get that response. In your case, over the range from 0 to 6 volts in, you get 2.54 to 8.41 volts out. Therefore gain is:

This is close to 1, meaning the amplifier actually attenuates slightly, but it is certainly not negative.

The problem seems to be that you then express this gain logarithmically, and the negative result confuses you. Voltage gain expressed in dB is 20*log10(gain), which is -.19 dB in this case. Note that logarithmic values, such as dB, will be negative when the linear value (the straight gain in this case) is less than one. In other words dB gives us a scale where 0 is unity gain, negative values represent attenuation, and positive values amplification.

While there is nothing wrong with gain less than 1, and therefore that gain expressed in dB being negative, this is not the same as negative gain. Negative gain means the output is inverted from the input. For the gain to be negative, the output would have to go down when the input goes up, which is clearly not happening in your case.

"Negative gain" is an ambiguous term and should not be used.

1
Hi-Fi Stereo Amplifier gain regulation with potentiometer
3
How can I see if my filterless class-D audio amplifier is clipping or not?
1
Controlling a Piston Variable Pump with a Raspberry Pi
1
Problem encountered while amplifying load cell signal with LM358
2
Variable gain amplifier output appears on circuit positive and negative supplies
0
Why does the output voltage of my linear gain amplifier depend on the JFET gate voltage?
1
Mosfet Amplifier design help