I want to power 20 RGBW LEDs. Each of these lamps and each color channel should be individually controllable with PWM. Since it concerns pure LEDs without internal control I would like to use a PCA9632 for each lampe for each channel. Now each color channel needs about 3.2V at 0.7A. The IC doesn't manage this power of course. Therefore I want to install 4 constant current drivers each.

If I would now take a constant voltage source and connect the lamps parallel to it, a total current of up to 56A could occur which in many respects is very impractical and hardly feasible.

As far as I can see there are two possibilities.

But especially with the 2nd point I don't really know what the components are called and what to consider. With the PWM and a kind of switching regulator, radiation problems could also occur? This kind of problem should have been solved by many people already. Are there maybe open source designs for similar problems? Maybe there is another approach?

I want to power 20 RGBW LEDs. Each of these lamps and each color channel should be individually controllable with PWM. Since it concerns pure LEDs without internal control I would like to use a PCA9632 for each lampe for each channel. Now each color channel needs about 3.2V at 0.7A. The IC doesn't manage this power of course. Therefore I want to install 4 constant current drivers each.

This is basically the right idea if you want individual "pixel" control of the LEDs. If the distance between the LEDs and controller isn't huge (like they're actually pixels in a grid or somesuch), you should be able to use the I2C controllers to drive current controllers for each channel.

If I would now take a constant voltage source and connect the lamps parallel to it, a total current of up to 56A could occur which in many respects is very impractical and hardly feasible.

Yeah that could be a fair bit of extra copper. If you are using the right type of constant current driver for the LED it shouldn't expose the LED to a nasty voltage, but it wouldn't be a horrible idea to check as LED efficiency is sensitive to instantaneous voltage.

You'll need 1.5khz PWM suitable current controllers between the voltage source and the LEDs anyway, and the purpose of these is to perform this voltage reduction.

If you want, you can hard switch them to the PWM signal from the I2C controller, in which case you should have localized voltage drivers for each LED color to split up your potential 56A, which isn't a horrible way to go(but requires greater confidence in your cooling solution if there is no current control, so current control is highly recommended) or inline resistors(yuk). This is easier to execute if the "pixel"s are physically close so you can group a bunch of greens, bunch of reds, bunch of blues, etc.

Rather than running all of the channels at 700mA max, you should tune the RGB channels by running each or all 3 of RGB at 700mA and seeing which one is dimmest, then tune the other two down to that brightness as they likely won't be perfectly matched at 700mA. This way in your software, 100% will really be 100% and you won't have to worry about software tuning the brightness as much. You only have 256 brightness levels, so if you do too much tuning in software your color resolution will suffer.

There are other ways to control LEDs too, but regardless of the method you choose, you will need to design your cooling solution to be able to shed ~200W at full brightness without letting the LEDs become too hot. Erm... Unless you're really certain you need 150W of RGB light, you might want to consider ordering a few high power RGB LEDs and doing a mockup of a single pixel to confirm that brightness level(and therefore thermal design) is really necessary. This would also give you a chance to get the I2C driver, the current controller and the LED as close together as possible and use an EMI tester if you want.

I have a board around the LT3476 that works well for me.

The IC requires a 5V supply for itself, a 5-36V supply for the LEDs and four 5V PWM signals for controlling the channels. As passives you need for each channel:

plus a few smaller passives for the entire IC (resistor for current set point, decoupling cap for the IC power supply).

You can use an LT8500 to provide 48 10-bit PWM channels from one SPI connection. 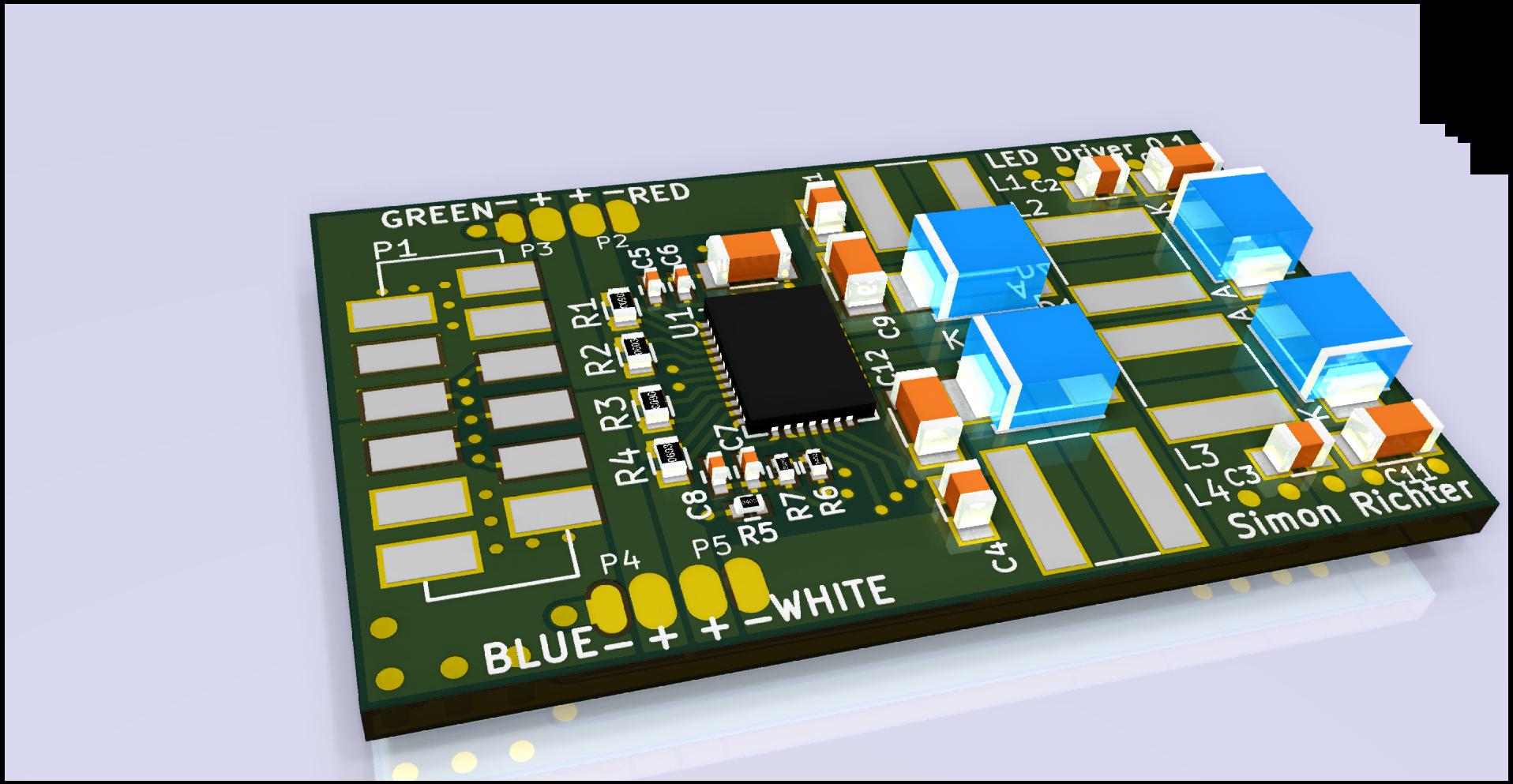 This board was fairly easy to design, even as a beginner, the datasheet has a fairly comprehensive list of things to look out for. The only difficulty is that it's 0.5mm QFN, you definitely want solder mask between pads, but a lot of cheap board houses will not manufacture that properly.

I can also share this design (KiCad files) if you like. My board has fairly obvious sections (connector, output, ICs, passives) that can also be rearranged if needed. My board will need some adjustments as I supply the IC from the LED supply and I have a weird connector because of space constraints in my application.

As I interpret your question, you want eighty 700 mA LEDs each with their own dimmer.

This is likely the most challenging LED project I have seen.

What is the target size for the PCB?
What is the part number of the LEDs?

You must use a switching CC regulator, a linear PWM register driver will not work at 80 x 700 mA. Even with a switcher an 80% efficient driver would not be easy.

With strings of LEDs 97% efficiency is easy.
With a single LED (highlighted) 80%, not so easy. 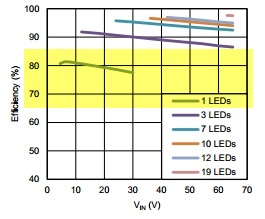 Otherwise your PCA9632, or a shift register driver with multiple PWM outputs (e.g. TLC5917), driving the PWM inputs of 80 individual 700 mA drivers is the only viable option.

Replace LEDs with resistors and use as PWM generator. 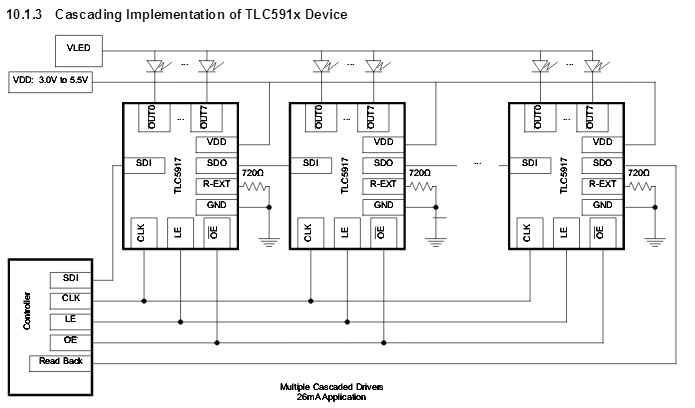 If you could use multiple LEDs to reduce the 700 mA, that may open up additional alternatives.

The power supply voltage would depend upon the Vf of the LEDs and the overhead voltage required by the LED drivers. I do not see the problem with the mains power being run to a 3.3V - 5V power supply near the PCB. I do not understand why you would suggest a 24V supply for a single strip. Would this be a multiple PCB or single PCB project? A 24V supply line could cause more problems than it solves.

Because you need a switching CC driver for each LED, the supply voltage does not need to be much above the LED's Vf. A supply of 24V will decrease efficiency. And you NEED efficiency. 5V should be more than sufficient for driver overhead and distribution drops.

Keeping the LEDs cool is a bigger problem than power distribution. But the solution for one can also work for the other.

Then one side of the PCB is solid copper heat spreader and also the 48V buss. The tracks connecting the LEDs are copper pours that are also used to spread heat. With 2 oz copper the track resistance is below 0.02Ω per foot.

a total current of up to 56A could occur which in many respects is very impractical and hardly feasible.

It would be a challenging project. How feasible depends on the PCB size. I doubt it could be done with passive cooling if a single PCB.

You will have a massive thermal management problem if you want these LED close to one another. 20 red = 15 W, 20 each GBW = 134 W = 150 W for the LEDs + the LED drivers. The power that needs to be dissipated PD would depend upon the efficacy of the LEDs. PD could be easily reduced to less than 75 W with quality LEDs. I would take a close look at Luxeon Color C Line for this project. I generally like OSRAM Oslon or Cree XPE for color LEDs. When looking at Luxeon Color C it is very important to know they are spec'd at 85°c. This makes a huge difference for red's efficiency. Luxeon Color C also has very good color mixing optics.

The problem color will be green. Green is the least efficient (in radiometric terms) LED with the highest Vf. You may not be able to find a green with a typical Vf below 3.2v. The Luxeon Color C green LED has a typical Vf of 2.55V, lower than all other high power green. Green is the reason a 3.3V supply is not viable. Keep in mind the 2.55V is at 85°C, to compare it to other LEDs spec'd at 25°C you need to add 144 mV (60° x 2.4 mV) to the Luxeon due to the coefficient of temperature.

High power green LEDs are the most problematic.
Running thermal experiments on 40 Watt strip of green. 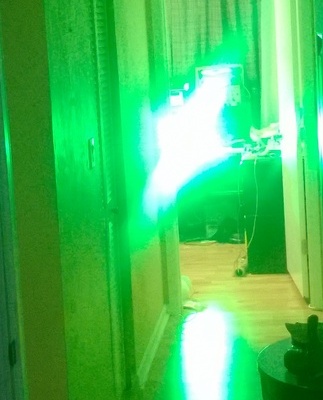 This is a water cooled dual strip. The copper bar could be split in two, one half for ground and one half for VCC. They could be thermally reconnected with thermal tape as an electrical insulator.

You may be able to do a passive heatsink that runs cool enough to not burn up the LEDs then add a fan. This way if the fan fails, the LEDs are not ruined.

I have found that mounting a thin (0.062") copper or aluminum strip to the LED side of the board does better than using thermal vias. In small quantity I pay about $1 per foot for a 0.5" wide copper bar. 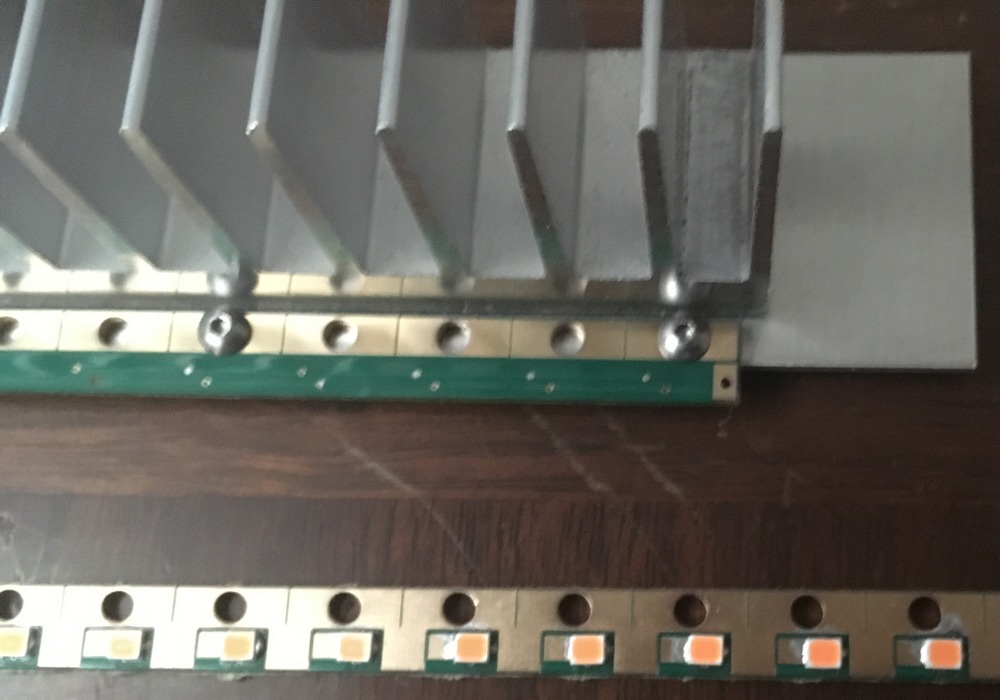 The strip below has a single high power LED spaced 0.7" apart. Thermal management was difficult. Red LEDs are very thermal sensitive as they will easily lose 50% of their radiant flux due to temperatures that are otherwise acceptable for white and blue. If the electrical watts are not radiated as photons, they must be dissipated as heat. You don't need more heat.

Even if your LEDs were spaced far enough apart you'd still have 4 times the thermal management issues as this water cooled strip.

To quickly move the heat away from high power LEDs I found it requires the copper bar to be mounted, directly to, and as close as possible to the LED's thermal pad on the component side of the PCB. 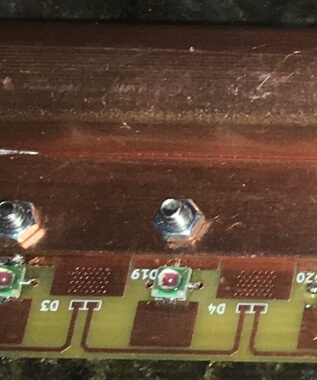 If you mount your LEDs in squares of 4 LEDs you will need a copper bar on each side of the LEDs. If you use one copper bar for GND and the other for VCC, you no longer have a power distribution problem.

Not the answer you're looking for? Browse other questions tagged led led-strip led-driver or ask your own question.