Bypass LED with switch (why)?

I have a schematic attached that appears to show a switch bypassing an LED, or the other way around. In the working device operating the switch lights the LED and engages (as in turns 'on' a 'normally' off) binary state on the controlled device.

Why would the LED not be in series with the switch?

Some context: I purchased an guitar amplifier used. It does not come with the 5-pin "remote foot switch" that allows one to control the amplifier from across a room/stage.

These foot switches are typically passive devices that plug into an amplifier using a 1/4" Phono plug (single function) or TRS (Tip-Ring-Sleve) for two functions. Latching footswitches on the remote unit ground the Tip (and/or ring in the case of 2 function boxes) closing some control circuit on the main unit. This is usually employed for switching "channels" from "rythym" to "lead", disabling reverb, etc.

That was 50 years ago and now guitar amplifiers have more functions. Some use a 5 pin DIN connector/cable to allow 4 latching switches to double the controls that a single TRS arrangement could provide, but essentially using the same open/closed convention. E.g 4 pins conditionally closed to ground based on latching footswitches.

I found the schematic for the footswitch that I need to replace or replicate and it appears to have an LED and SPDT (functioning as a SPST as far as I can tell) in parallel with an LED.

I haven't yet found the schematic for the amplifier, but how could this possibly work?

Could the schematic be drawn incorrectly (not likely), or is there something the amplifier is doing in its active control switching electronics that I'm missing (very likely). 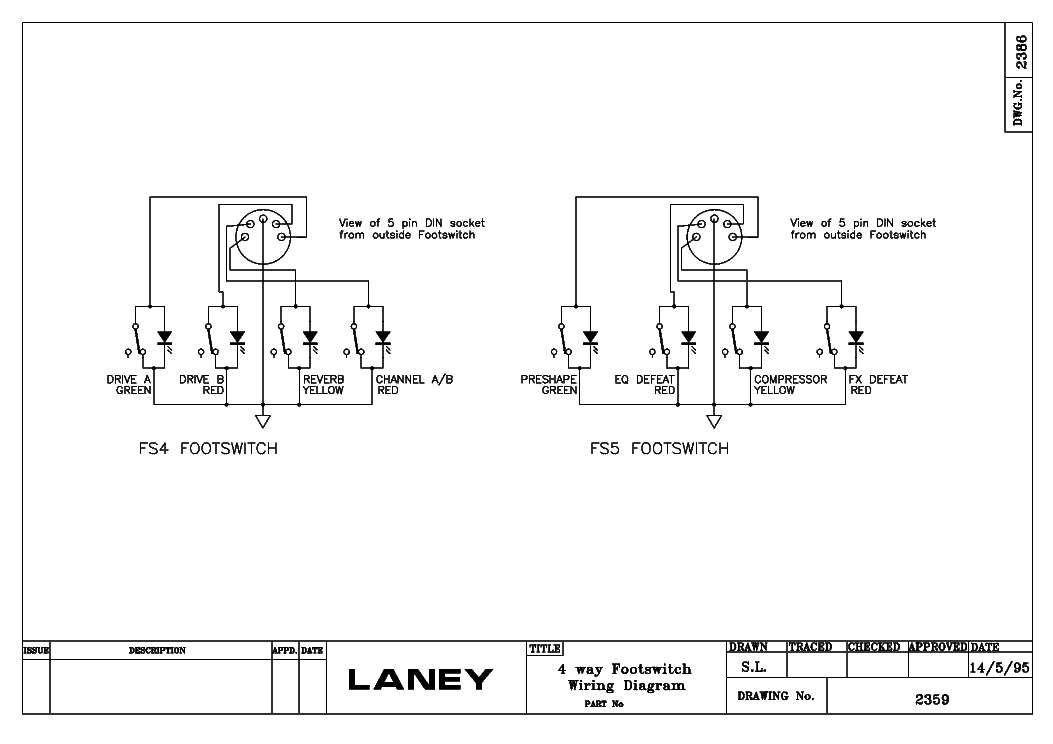 The two are essentially the same schematic with different labels on the box.

It is a clever way to arrange the circuit and results in a configuration that is easy to manufacture.

If the LED current is set at 20mA, then the switch current will be 36mA to keep the contacts clean.

Not the answer you're looking for? Browse other questions tagged led switching practical or ask your own question.

6
Automotive circuit works but with lots of heat. Is there a better way?
0
Flashing LED's and use of switch
2
Read Switch Status without interfering with LED
0
How to quickly switch power to a LED strip?
2
MOSFET reduces LED switching time - why and how to resolve
2
Need help controlling a relay using a dimming light
0
100W LED with a switch
0
Switch LED with Solid state relay (PhotoMOS)
0
PIR sensor bypass for LED light strip