Is this optocoupler front-end safe?

This is a follow-up to Is this line detector safe?

I'm re-designing the front-end based on some great feedback from the community. I've decided to move to the following topology: 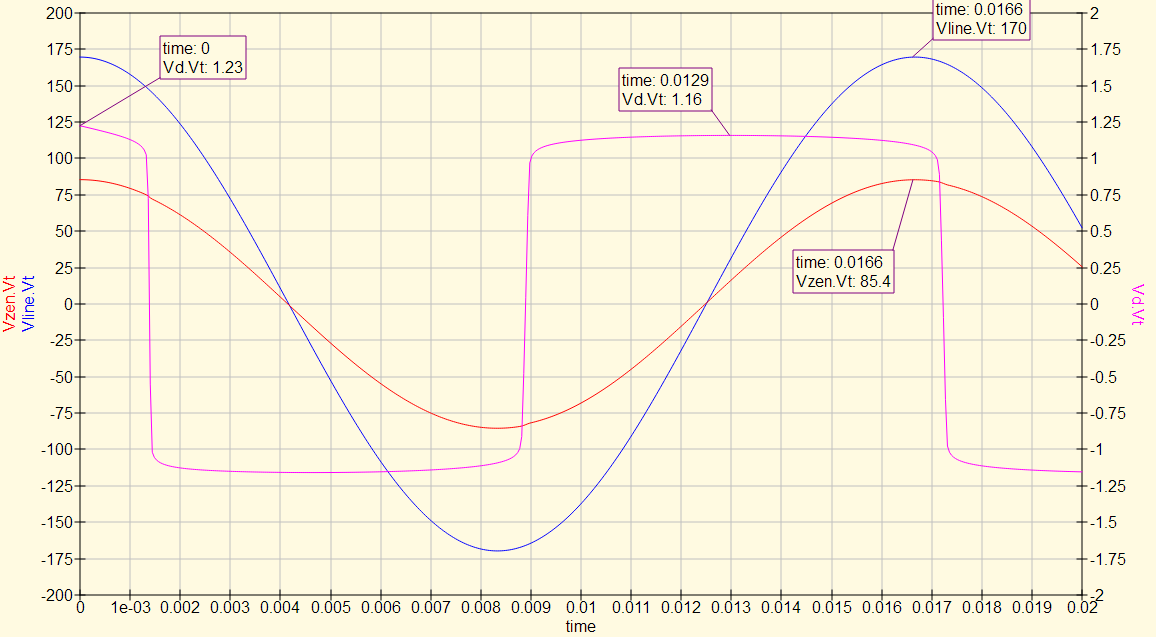 Have I missed anything? Is my method sound?

You missed nothing important. I did this most every month for 15 years at a surge manufacture plant. While most people might cut corners and have a single RC based reactive power supply it is wise to double up on R and C at times, especially if Vin is prone to surges. Two 3 watt resistors spread the heat and generally had a breakdown voltage of 400 volts, so 2 in series made it 800 volts, with a little safety margin.

Also R dissipates the real current as heat, so even for 120 VAC we used 2 18K 3W resistors in series with an AC type optocoupler. For 600 VAC (Canadian products) we used 2 47K 3W resistors, always the flame-proof type. We only used capacitors (X2) when we needed actual power from one or more phases. It was no more than 60mA with a range of 50mA to 70mA, so capacitor tolerance could be 5%.

Due to UL and ISO demands above 277 VAC we HAD to use 2 capacitors rated 630 VDC to be sure shoot-through was not possible. Please see this link about the capacitor issue and why 2 is much better than one, even for the best grade of capacitors.

You seem to have a keen insight as to how to make reactive sensing or reactive power supplies safe, even during a surge event. By the way, if used at the main service entrance panel you are allowed to use ground as a return path for current, as the neutral to ground strap would be in that panel.For outlets or sub-panels neutral must be the return path.

From our point of view shoot-through meant trusting a single capacitor not to arc internally during a surge, which is why series resistors are mandatory for us. They limit surge currents and turn-on currents if the power is switched on during a cycle peak (90 \$^{o}\$). The resistors protect any down-stream diodes and opto-couplers by limiting peak possible currents to their safe region. A well built reactive power supply is supposed to be safe to short out, as the capacitors set the overall current and resistors limit surge currents. We also used 1 mH inductors to block RF or surges with sharp rise/fall times.

Remember the capacitors are transparent to RF and surges with sharp rise/fall times, so the resistors are an insurance policy that works well. Adding an inductor (as an RF choke) is a cost and space-allowed decision.

If all you are looking for is to detect that AC is present within reasonable limits (what are your limits??), I'd use a peak detector based on your TVS. 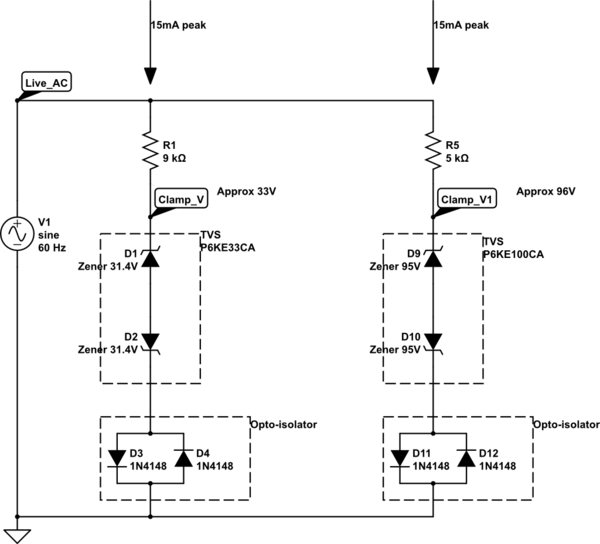 I've shown two schematics here, one with a 33V clamp and one with a 96V clamp, just to show options. Obviously you only need to select one of them. The circuit will run under the simulator to see the differences in clamp voltage. 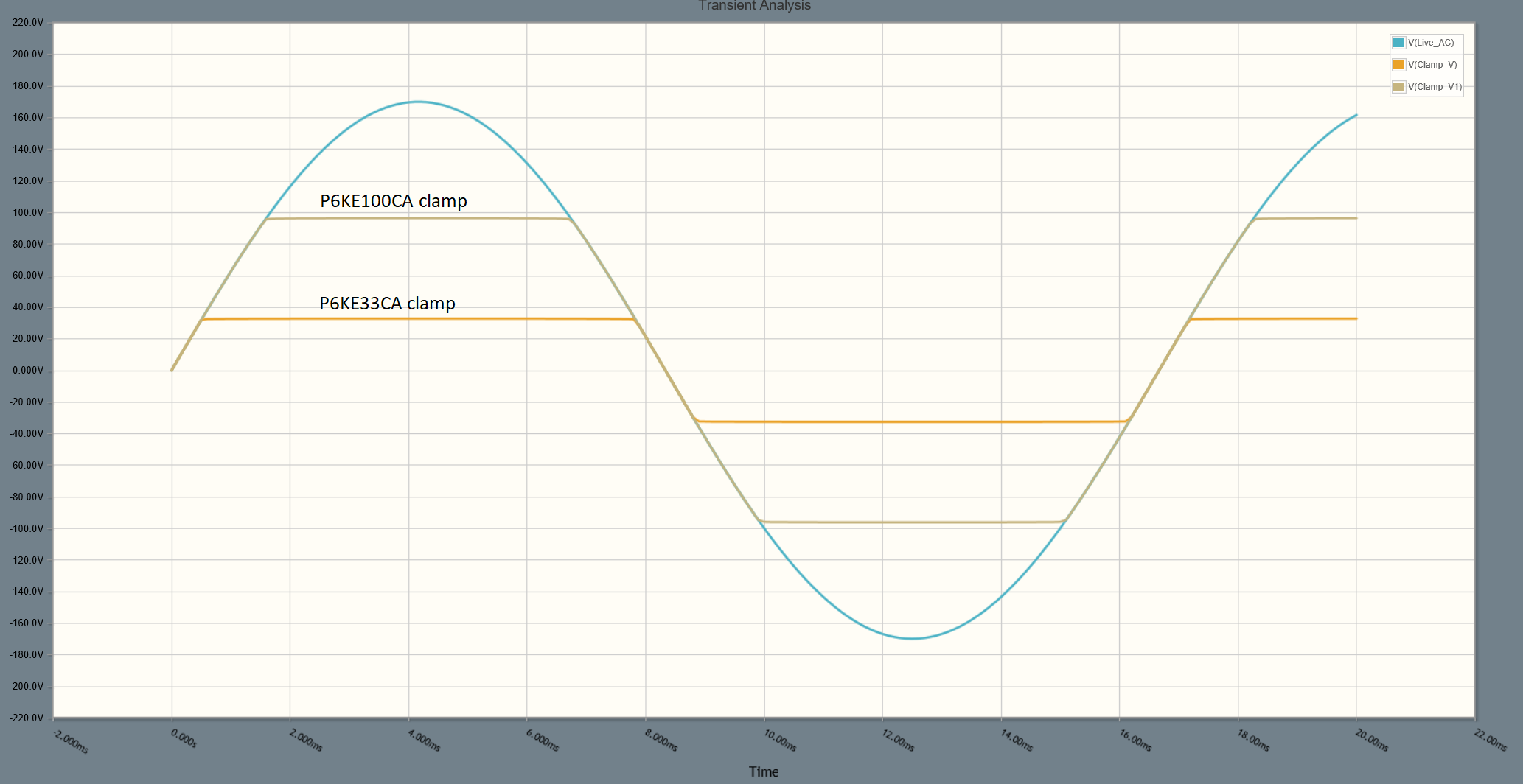 The signal you get from the opto-isolator will occur at some unknown time between initial conduction of the TVS (with its variable threshold) and the CTR of the opto. However the signal will be symmetrical around the AC input sine wave peak at 90Deg which you wanted to achieve.
There will be some minor fluctuation due to the capacitance of the TVS of course, but this should not concern you for your particular application.

I'd suggest that the P6KE100CA would be a better choice of TVS, but either would work.

Not the answer you're looking for? Browse other questions tagged opto-isolator transient tvs or ask your own question.

38
How did this capacitor survive having a nail driven through it?
1
Is this line detector safe?