Test a transistor with a multimeter

My question is that, STEP 3 (Emitter to Base) failed to show “OL” (Over Limit). Instead I read about ~1.2V. I used another same transistor that I am sure that it works on the circuit and I still get the same reading. Is the transistor a) bad b) wrong test c) good for some reason ?

Instead I can read about ~1.2V

That makes perfect sense as the TIP130 is a Darlington transistor. 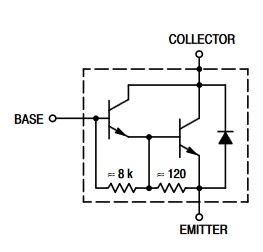 Note how between base and emitter there are actually two BE junctions in series, added up those two would have a forward voltage of around 1.2 V.

Also note the additional diode between collector and emitter, it is only present in some Darlington transistors. Most "single" bipolar transistors don't have this diode.

Why does this type of transistor exist?

Because is has a very high current amplification! A single transistor will usually have a current amplification (beta) of around a factor 100 to 500. But power transistors needed to control large currents (1 A or more) often have quite a low beta, often less than 30. Now by adding a (low power but high beta) transistor we can multiply the betas so we get a beta of (for the TIP130) of between 500 and 15000. So a lot less current is needed to control a large current.

I think "Emitter to Base" may mean the PN junctions are reverse biased. The meter should show an open circuit. "Base to Emitter" measurement should be about 1.2V jlp

Not the answer you're looking for? Browse other questions tagged transistors pcb multimeter npn test or ask your own question.