Due to space constraints on a board I am designing, it is ideal to have the GNSS cable connecting vertically onto the top of the board. I haven't been able to find any edge-mounted connectors that go to a right angle vertically. Obviously edge-mount would be ideal electrically, but I am wondering if it will introduce too much loss too use a through hole SMA connector mounted vertically on top of the board - the 50ohm trace leading to the GNSS receiver would a top mounted grounded CPW line (signal trace on top with ground planes surrounding trace on top, and ground plane below the signal on the bottom side of board). I am concerned about 1. since it is TH, it will be soldered on the bottom, so there is a possibility of shorting the signal pin to the grounded housing of the connector; or possibly not getting a good enough connection to the top-side of the plated through-hole - where the trace is connected. 2. Loss due to the right angle bend where the signal pin meets the plated through-hole. 3. The leftover stub of signal pin sticking out of the bottom.

Here is the digikey link to a possible connector: https://www.digikey.com/product-detail/en/cinch-connectivity-solutions-johnson/142-0701-201/J500-ND/35274

This for GNSS applications, so it is all below 2GHz.

I haven't been able to find any edge-mounted connectors that go to a right angle vertically.

If this is a one-off hobby project, you can probably use one that looks like this: 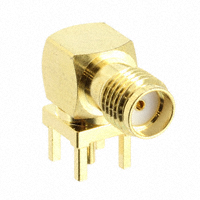 Typically a 0.062" thick PCB will just fit between the center pin and one pair of ground stakes, allowing you to use this as a clunky edge-mount connector.

Or you can use a right angle adapter with whatever edge-mount connector you like.

since it is TH, it will be soldered on the bottom, so there is a possibility of shorting the signal pin to the grounded housing of the connector

We (EEs in general) solder through hole parts with 0.050" spacing all the time with no trouble. The spacing between the body legs and the center pin on an SMA connector is typically more than twice this distance (it's about 0.14" on your part).

Loss due to the right angle bend where the signal pin meets the plated through-hole.

At 2 GHz this will not be a big effect.

The leftover stub of signal pin sticking out of the bottom.

This is a real concern when using SMA connectors near their frequency limits (maybe 10 GHz and up). Ideally, you'd mount the SMA connector on the opposite side of the board from where the trace is to eliminate the stub.

At 2 GHz, it's not likely to be a problem even if you have the connector on the same side as the trace.

If you're paranoid, you can get connectors with through hole ground stakes for mechanical stability, but surface-mounted center conductor like this: 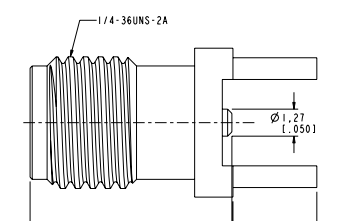 But these connectors probably need to be reflow soldered rather than hand-soldered.

Not the answer you're looking for? Browse other questions tagged pcb rf pcb-design through-hole gnss or ask your own question.

6
VCC trace routing on a two-layer board with TQFP chip
3
2 Layer Through Hole PCB
0
how to determine if system is matched in system
3
PCB ground plane separation between power and analog sections of board
4
Implications of routing same signal on top and bottom of PCB?
7
Flush Mounted Threaded Through Hole on PCB
1
Ground plane on dual layer PCB, Is plating needed?
2
GSM antenna CPW design
2
RF - sma pth connector impedance matching to cpw